We sleep in a bit today, partially from being up so late the night before and partially because we know what’s happening in a little while. Once everybody’s up and fed, we start slowly taking down camp. After one last check around the areas we’ve been to make sure nothing was left behind we load up the canoe and shove off.

Its a quiet, easy paddle around the islands as we head towards the Sag corridor. Joe takes out the GPS for a while, mostly to check our speed. Even with none of us really paddling all that hard we’re still averaging over 4mph.
Many of the canoes we pass that are headed in the other direction make comments about the head wind they’re fighting. We only smile and agree, with the memories of a couple days ago and our own struggles against the wind remain fresh in our memories.

Before long we’re in the Sag corridor and having to watch out for motorboats. Most slow down when they see us and try not to create a large wake. One doesn’t and we have to react quickly to turn the bow into the wake. Once we’re done cursing the driver of that boat we’re turning in to the Gull River. Voyageur’s docks are in sight….

We pull into an open spot on the dock and its immediately a chaos of our gear and other people’s gear. We quickly unload and prevent our stuff from getting mixed in with other bags, but somehow in the chaos of being so close to other people Ken’s sunglasses disappear into the Gull River.

Our wilderness adventure, planned for so long, has ended.

We check in with Mike and Sue, get my car keys back, and are given towels for the showers. While we take turns in the showers we’re also going through the gear somewhat to determine what we want to have accessible in the car and what can go under the trunk floor.
I keep myself busy by breaking down the fishing poles, packing up the car, and returning Voyageur’s loaner reel. Once in the trading post I start looking for souvenirs and other things to bring home to my family.
I find a book I think my son will like and a cute little t-shirt for my daughter. Pick up a t-shirt for myself that just happens to have the route we took screen printed on the back. I also get an ice cold coke for Ken, Joe, and myself.
After we’re done browsing in the shop we say our final thank yous and good byes to the Voyageur staff, then get into the car and pull out of their parking lot around 2:30.

We stop at Trail Center for what could possibly be the best cheeseburgers we’ve ever tasted. It could also just seem that way since its the first meal we haven’t had to cook for ourselves in almost a week…

A little while later we’re in Grand Marais filling up the car. Soon we’re headed towards Duluth and all points beyond on 61. Joe naps while Ken and I quietly take in the spectacular views of Lake Superior as we head South. Before long we’re back in Wisconsin and turning East towards Ashland.
Our new destination is High Bridge, WI and the 5 course disc golf mecca and campground set in the Northwoods of Wisconsin. We pull in to the campground around 6:30 and after a short tour of the available sites we pick one next to a large pile of split wood. 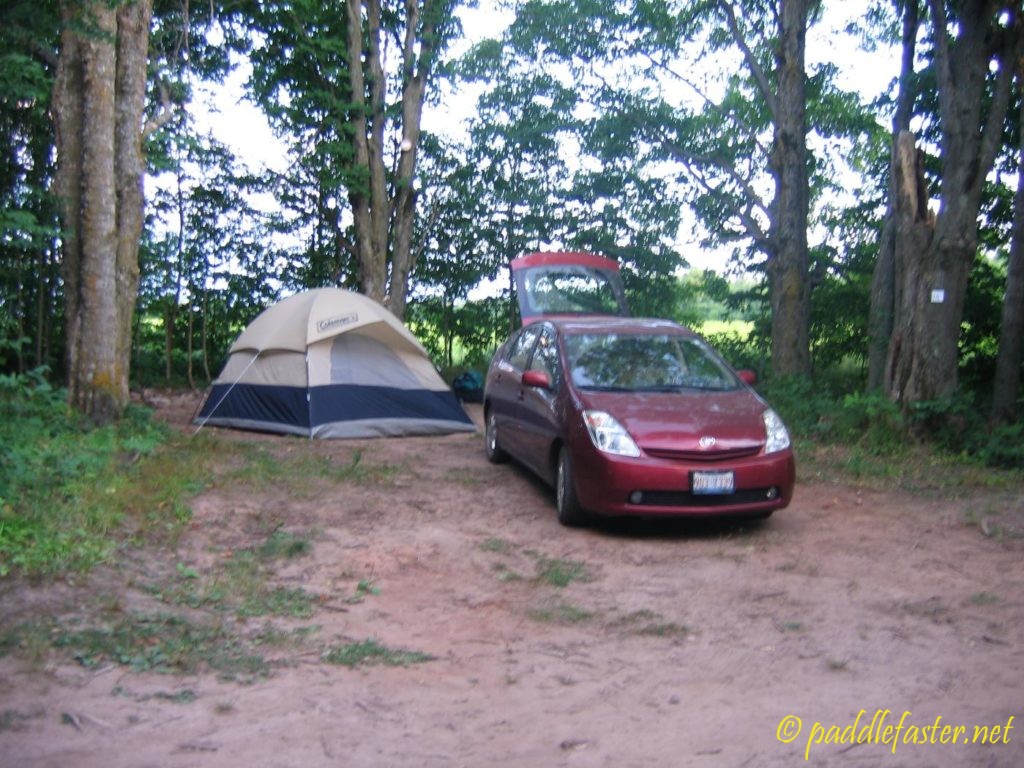 This site is quite a change to what we’ve become accustomed to while in the BWCAW… There’s bits of trash and broken glass everywhere, a clothesline already hung with a clothes pin still on it, random frisbees nailed high up in the trees above, a picnic table, and weirdest of all to us – the fire pit area seems large enough to park a subcompact car in and has no USFS fire grate!

We get the car unpacked and the tent up, then have a snack. We decide to head back towards a gas station we saw a few miles back to get some fresh supplies and maybe beer. Once we get to the gas station we’re dismayed to find out they don’t sell beer….. but we still pick up some chocolates, a 12-pack of coke, and some marshmallows – they didn’t have graham crackers, so no s’mores…
Head back towards camp, and totally blow by the turn to get to the campsites. We pass by a bar – maybe they sell beer to go? We stop and go in. The Packers game is on so practically nobody acknowledges our presence except the bartender.
She confirms that they do in fact sell beer to go & we pick up a 12 pack of MGD.

Back at camp the next order of business is getting a fire going for dinner. After a couple beers the pasta and sauce are ready to eat and we dig in. Once dinner is cleaned up we build up the fire and soon its so hot we have to sit several feet away just to feel comfortable.
We sit around the fire, sometimes talking, sometimes quietly meditating while watching the flames.

Before too long we’re all getting sleepy, so its time to douse the fire and hit the sack.