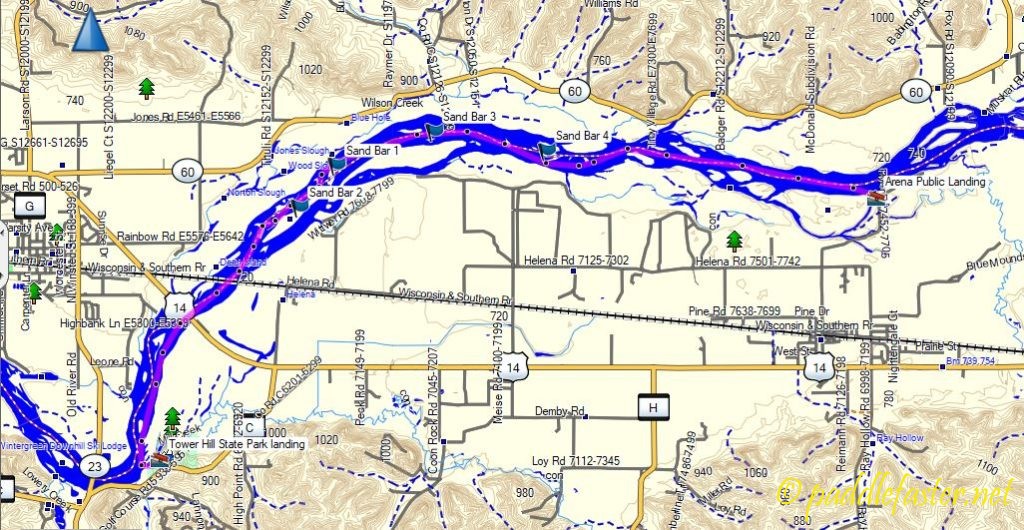 We’ve decided upon an easy 10 mile section – putting in at the Arena public landing and taking out at Tower Hill State Park. During the week prior to our trip our region had been in the midst of an early season heat wave, with daytime temps above 90 and heat indices pushing 105. The recent heat and lack of rainfall has caused the Wisconsin to drop into the sandbar sweet spot for current and depth. We could do without the oppressive heat, but other than that conditions look to be about perfect for river camping.

We have 18 people in our group that we plan on seeing at some point this weekend. There’s 14 people with us to start the weekend and the rest we’re expecting to join us tomorrow. We all get to the Arena landing around the designated time and proceed to eat lunch and repack items into coolers, dry bags, and load up the canoes. We have 7 canoes in our party and a kayak, and getting all that organized takes some effort. Another group comes to the landing, loads, and departs before we’re ready to go. We watch them paddle away towards the left, only a few minutes later they’re back and going the other direction. Apparently the channel is too low in that direction. We watch them go around the bend to the right and out of sight. Shortly after we launched the first of our canoes did we discover that the path was blocked to the right as well, and we would need to carry all our stuff over a 100 yard stretch of sandbar to get to the river. Ugh! We ended up partially unloading the canoes and group carrying them to the other side. Initially we tried dragging/pushing them across the sand and it was soon evident we wouldn’t be able to exert ourselves that much 4 or 5 additional times.

Finally all the boats are at the actual river and we are able to start our paddle down the river. Because of the carry and having to reload canoes again, our group gets pretty spread out. Larry’s in one of the lead canoes & sees this, and a couple miles down river he gets the group to pull off at a sand bar and wait for the people in the back of the group, including my canoe. Everyone gets out for a few minutes and stretches, takes a drink of water as it’s really out out today, and the kids play nearby. We all get back into the boats and get on our way. We want to have time to be able to get a good sized sandbar for our group, and figuring it’s father’s day weekend there might be other groups on the river.

A little while after we were going again Leith and Gavin catch up to me and Devin and tells me he can’t find his phone. I have him check his backpack and it’s not in there. He remembers it was in his pocket and remembers for sure he looked at it back at the rally point. When he’s sitting in the canoe we realize his pockets are about even with the gunwale – it could have easily fallen out at any point in the previous three miles! We head back to the spot Gavin remembered having it. Against the current, it takes us three times longer to get back to where we were just 30 minutes ago. We all beach the canoes and start looking. Gavin retraces his steps and no sign of the phone. We look all around the shallows where he got back into the canoe when we got on our way before – nothing. In reality we have no idea where his phone is. To make matters worse, he had turned it off and had it in airplane mode so even if we tried to track it we wouldn’t be able to. He did have it in a ziploc I gave him, so there’s a reasonable assumption that it might not be waterlogged yet. It doesn’t matter though, it’s accepted pretty quickly that the phone is gone. We launch the canoes and point them back downriver.

Thankfully, Larry figured that we would be spent from the extra distance and effort paddling against the current and stopped the group at one of the first suitable sandbars he came to.  It’s gigantic and perfect. The river has dropped so much recently that the sandbar is almost more like a round sandy peninsula coming from the shore. On the upstream side of the sandbar, several hundred yards away, the sand just fades into the river and with the heat its hard to tell the exact point where land and water meet. Where we’ve set up camp, however, is the downstream side of the sandbar, which has a 20 yard wide channel of the river passing between us and another sandbar island. This side is several feet above the level of the river. We set up our tents on the dry, hot sand plateau above and establish a campfire area on the lower shelf closer to the river’s edge.

The rest of the day is spent lazing under the sun. The kids entertain themselves in the river, splashing and playing while the adults keep a watchful eye on them sitting in the river nearby to stay cool. There’s a decent breeze blowing as well. Thunder storms to our North and West are sucking in the hot air for fuel. Once or twice earlier, before they get weighed down with gear, some of the tents threaten to collapse or blow away. Most of us have chosen to pitch our tents without a rainfly as the forecast maintains minimal chances for rain overnight.

Dinner tonight is a quick and easy meal we’ve had plenty of times in Scouts – foil packs! We take care of setting up the kids’ meals first. The fire isn’t big enough to do 14 or more at the same time. Once the kids’ are cooking, the adults assemble theirs. I’ve been busy tending to other things so mine ends up being one of the last to get made. With how hot today has been, being by the fire is like sitting next to a blowtorch.

Not long after dinner is done when all the dishes are cleaned up, the mosquitoes come out. It’s not too hot for them, and they are thick this evening. No one wants to hang out by the fire to try to wait out the skeeters except for Larry. We dive into our tent and I commence to read some Harry Potter to Devin. It’s a hot and muggy evening and we are hearing some distant rumbles of thunder. To our North around the WI Dells area there are severe storms that have been more or less parked for much of the afternoon into evening.

I’m having a hard time falling asleep. The rumbles of thunder seem like they’re creeping closer to us and the lightning show to our NW is incredible. The thunder is definitely getting closer now. Suddenly, I hear voices that don’t sound like anyone I know is with us, and there’s a spotlight shining around. There’s a couple guys in kayaks apparently doing some night paddling and looking for a campsite. I had nearly drifted off to sleep before their intrusion on our otherwise rumbly evening and I decide to get up to try to scope them out and maybe check the weather. We seem to have picked the perfect spot where Verizon gets almost no service. I’m lucky this time, however, and get 1 bar of 4G. I hop on to the NWS’ mobile site and pull up a radar loop. It seems like in the last slide, just off to our West there is a cell forming. I make a quick call to home to check in before I lose signal. I think I’m going to put the rain fly on the tent now. The lightning is more intense and there’s no mistaking that the thunder is closer and louder. The guys in kayaks are still talking loudly. They seem to have landed on the neighboring island across the narrow channel. The little bit of distance helps to diminish but not eliminate their sounds.

The first drops start to fall as Gavin and I fight the breeze to pull the fly over the tent. By the time we’re finishing up I see Larry is doing the same for his tent. Everyone else seems to have buttoned up before settling in. I try to dodge raindrops for a few more minutes and make sure nothing is out that shouldn’t get wet. I get back in the tent as the rain is really coming down hard now, and Gavin and I chat for a little bit. The rain has helped drop temperatures a little, and after writing in my journal for a while I feel sleep tugging on my eyelids and I go to sleep.