We wake to cloudy skies a little after dawn and break down our camping gear quickly and quietly. Brian camps with a hammock, and his setup goes up and down pretty rapidly. By the time we’re packed up and ready to go, the rest of camp is starting to stir. I say bye to my son Gavin and then we’re off. We make decent time on the way to the Flowage, stopping for breakfast at a diner on the way. We also make a stop at a tackle store not too far from the road to the landing to get licenses and pick up some bait for the week and a bucket.

As we’ve been headed towards Mercer this morning the clouds have grown progressively darker. At the bait store it started to rain those big, heavy drops that come when it might just threaten to downpour or bring the full thing. As we pull into the landing, on the edge of cellular data coverage, we consult the radar and determine now is probably the best time to try to launch, it looks like when it rains it’ll rain for a while and we may as well try to get some miles behind us.

What we didn’t have in rain instead came in the form of gusty crosswinds that kept us more often in the ditch of waves than going the preferred way straight through them. More than once we nearly lost our balance in the canoe when a well timed gust would hit at the same time we’d be down in the valley.

We take refuge at site R-38 for a little while, and after a snack plus killing a tick that was crawling on the sitting log near the firegrate conditions have improved enough that we can continue. We paddle up deeper into the Flowage, following the historical channel of the Flambeau River. Several of the campsites we’re able to spot are open. Each site here has a signpost, a fire grate (different style than both BWCA and Sylvania), and a wilderness latrine. It periodically rains on us as we paddle as far up as F-16 as it’s reportedly a good site, and evaluating the other available campsites for their qualities that we can tell from the water. F16 turns out to be already taken, so we head back to R-32, which is a single campsite on a small island right on the ancient channel. 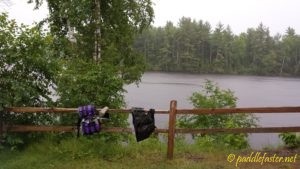 The main camp area is fairly elevated from the shore, and there’s even a split rail fence around much of the top to discourage people from going down those sides to slow the effects of erosion. The rail will make a great place to dry PFDs and other garments during the week, as well as something to hang the gravity filter from.

There was a turtle trying to dig when we arrived in camp, and walking around the shore it’s evident this place is a turtle nursery. The sandy SW side protected by the fence above is littered with turtle eggshells. So many that it looks like someone scattered white flower petals all over the hillside.

We get camp set up in between bouts of rain. There’s enough cell coverage on the island that I am able to pull in mobile-friendly radar images and see that the western edge of the rain is not far from us and it should let up soon.

The tarp is set up so it provides decent coverage for the fire grate, so we have a place to hang out and have the fire for entertainment if we get bad weather later in the week.

The previous occupants of the campsite left behind some wood and after augmenting with more that we scavenge, we’ll have a nice fire to round out the day.

An attempt at fishing was made, but nothing seemed interested in the minnows we were offering. Around us as evening settled in was the sound of frogs, crickets, and other night insects.

Before settling in for the night Brian and I happen to look up and realize that a river of white was streaming overhead – the Northern Lights were out! We sat, amazed and entranced for a while before heading off to bed. I kick myself in hindsight, we should have gone out in the canoe to get a better Northern view. Photos I’ll see from the Scout camp that night will show that the lights were in full display mode. 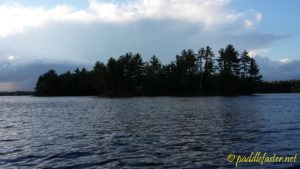