The first one up again today. I get right to work setting up the stove and heating up water in the pot for breakfast. Matt joins me a few minutes later and we enjoy a cup of coffee in the peace of the morning before we wake up the girls. Naturally, once they’re up and out of the tents the water’s gone cold so we need to heat up some more. No worries, though. We’ve got lots of fuel and its not like we’re punching a clock. Everyone goes about their business of getting fed then starts packing up camp. There’s still a wind coming from the S-SW, and for much of the day today it’ll be on our backs. The forecast calls for increasing chances of rain as the day goes on so I’m hoping we hit the water sooner than later. 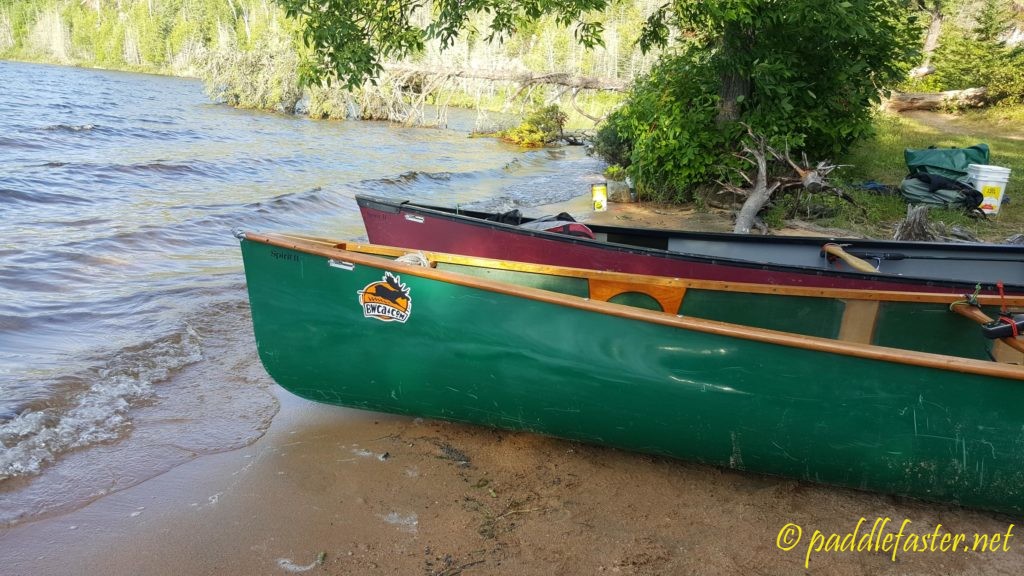 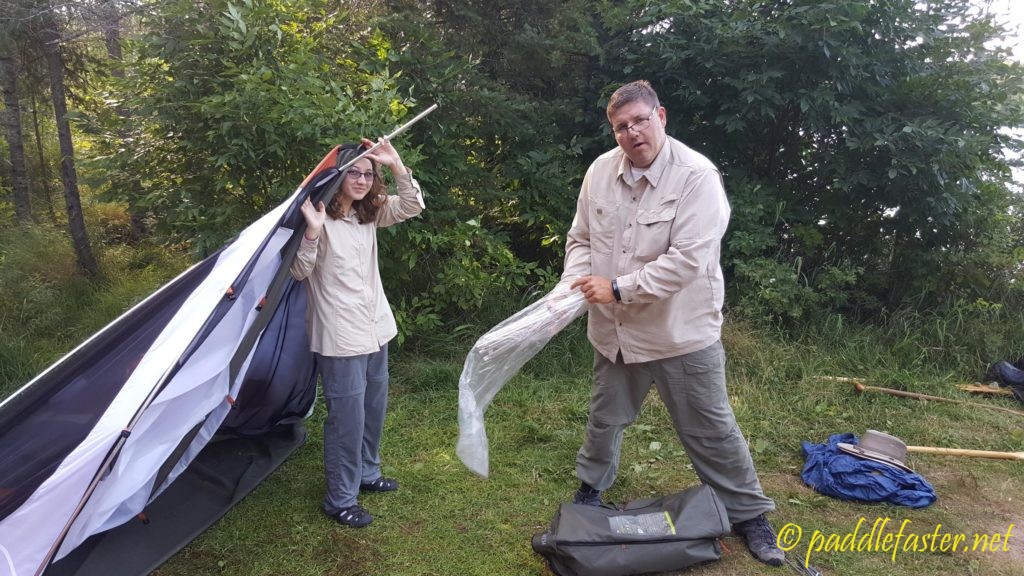 Its about 8AM and we’re just about ready to leave. Evie wants to wear the GoPro today so all the shots are from her perspective in the bow. Not sure what I was talking to her about here, maybe I was telling her to be careful with the camera. Maybe it was instructions on what to do in the event of capsize, since we’ll have wind to contend with. Maybe I was just reminding her that I’d need to call on her for extra assistance in windy conditions. Who knows? 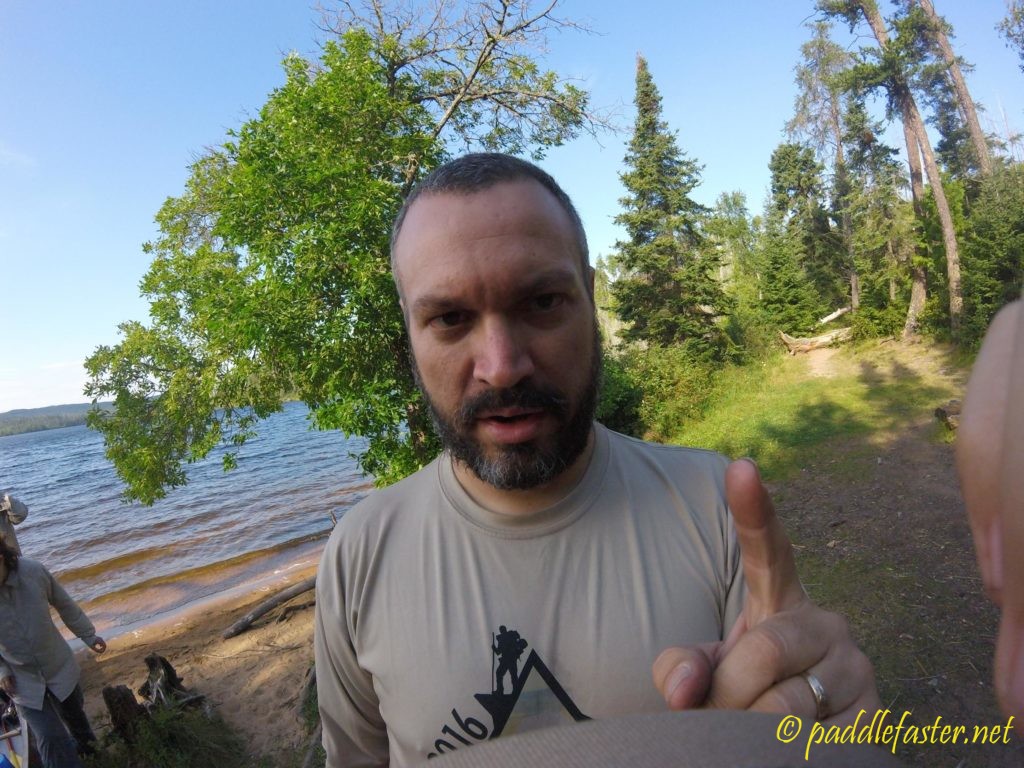 Anyhow, we’re on the water now & quickly come to the first portage. Evie usually goes ahead on the portages and takes over our day packs, paddles, and anything else small from our boat. She decided to do a little extra scouting on the far side of this portage from the top of the cliffs. From her perspective I wonder if we could have run the rapids versus taking the portage? I don’t regret taking the portage, I’ll always choose safety over risk when out canoeing. Especially when its my kids or someone else’s kids involved. 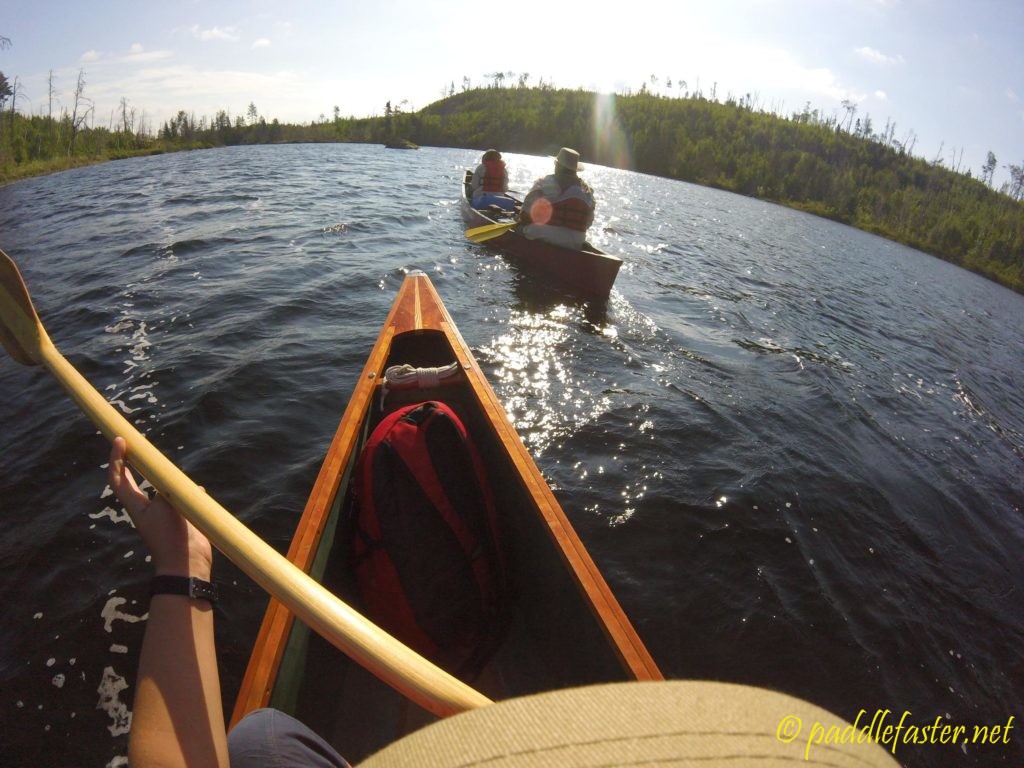 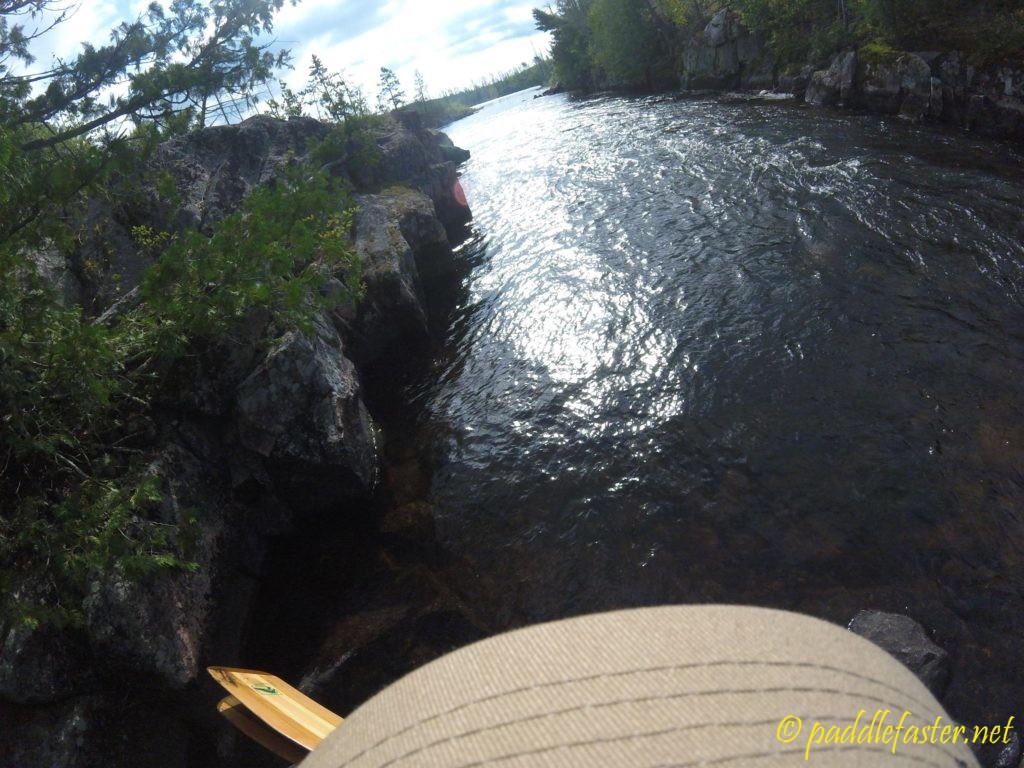 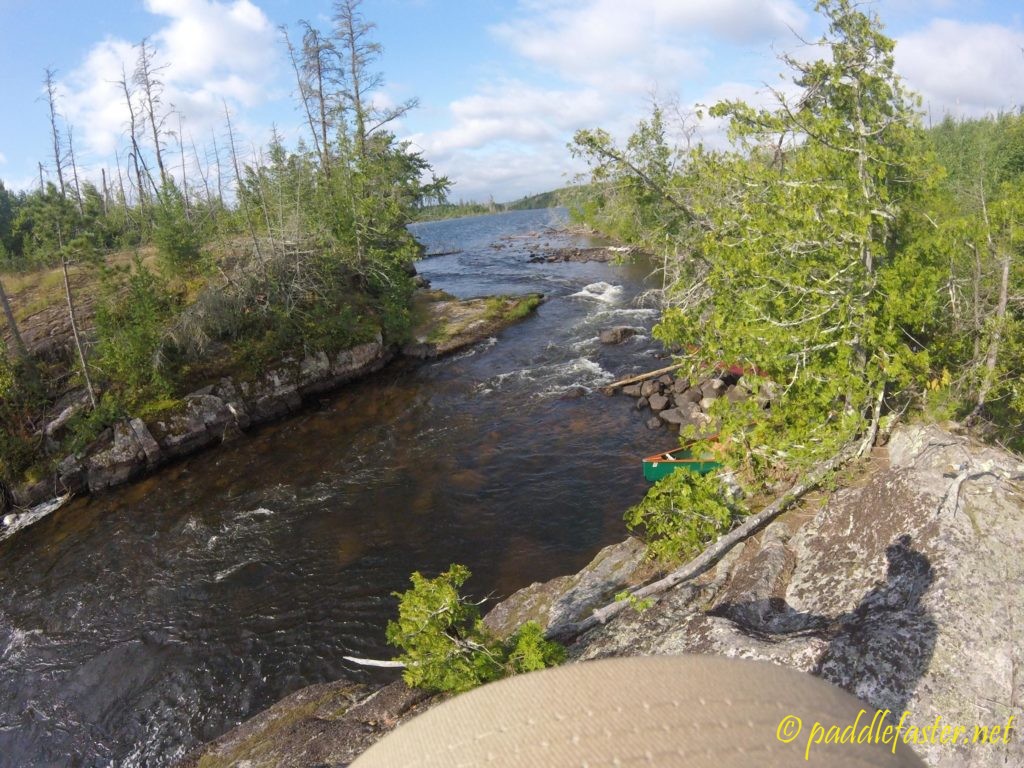 Like her dad, once Evie knows how to identify fruit she’s like a bloodhound. Apparently she found a little snack & I remember her bringing a couple to me. 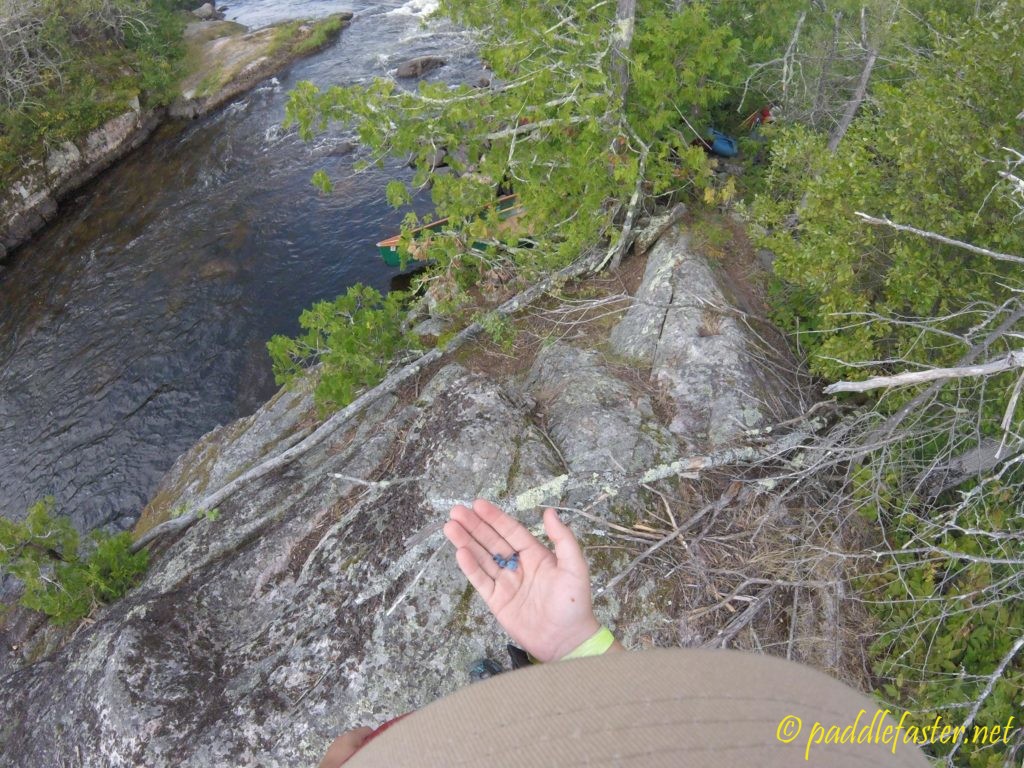 This was a pretty muddy portage, albeit short. The put in on the far side of the rapids was right at the chute and only had room to load one canoe, so we got ours floated first and cleared out for Matt & Grace. 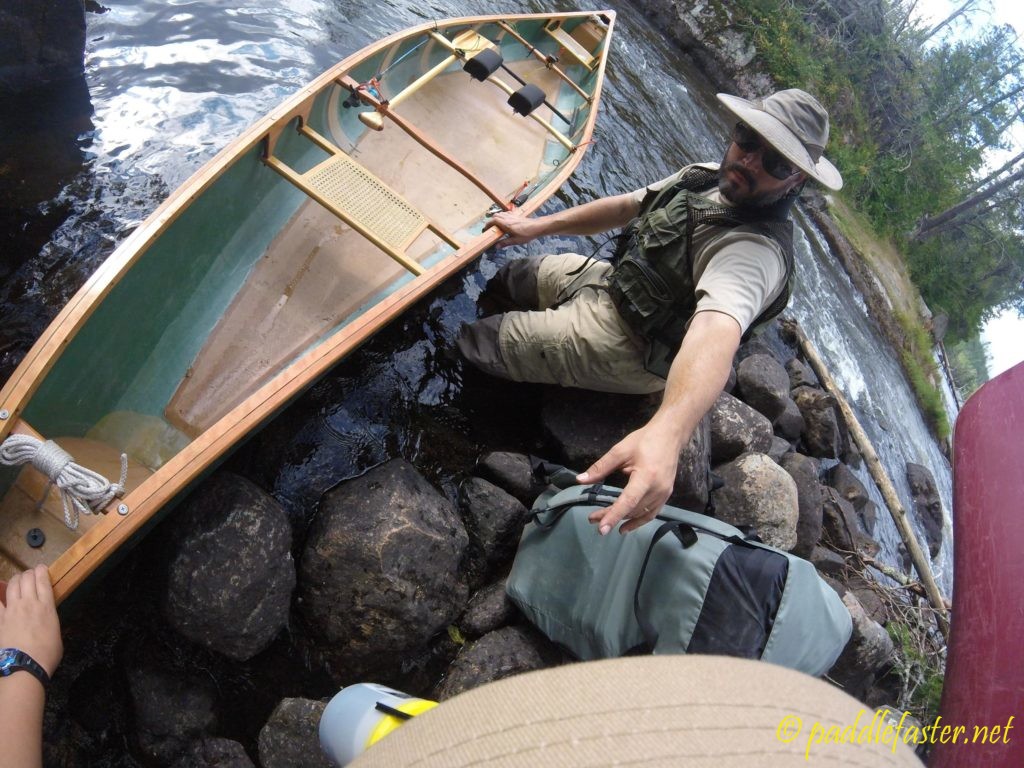 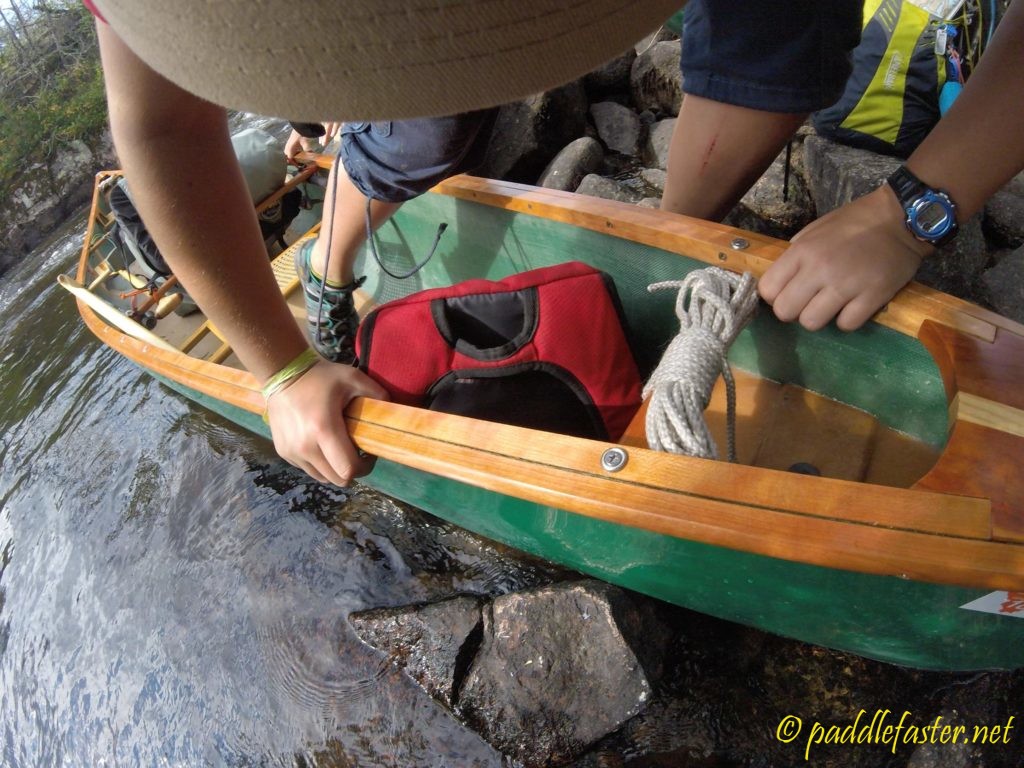 Once everyone was back in the canoes it was a short paddle to get to the Swamp Portage. The portage itself wasn’t much to write home about, except for several longish boardwalk sections. 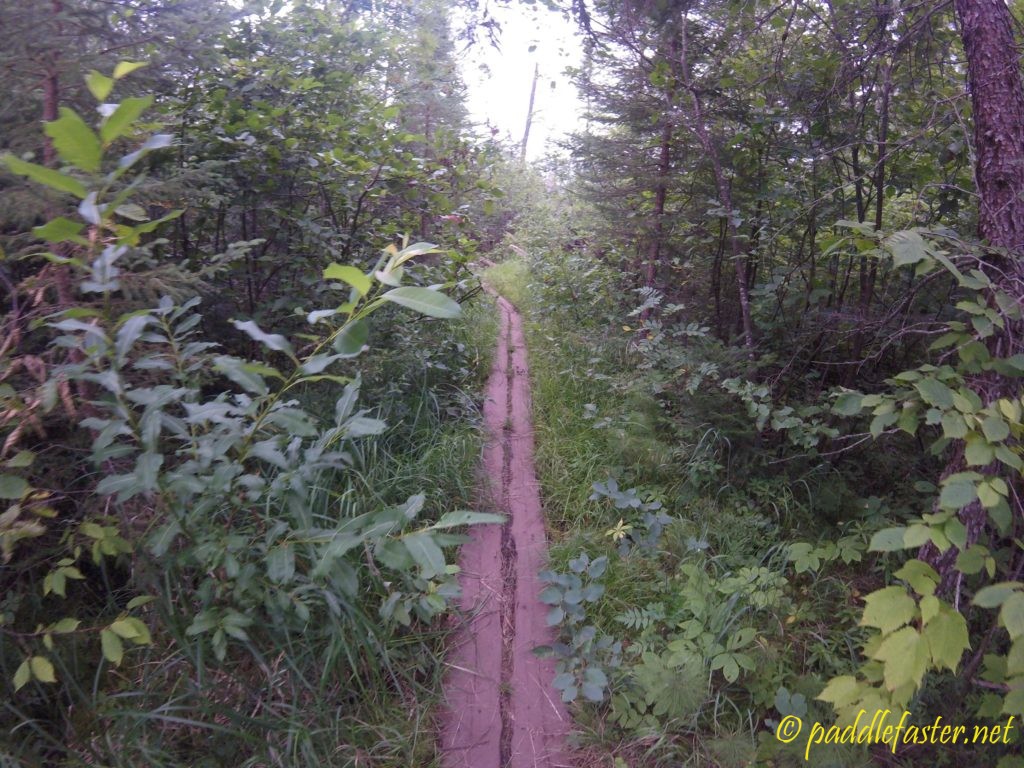 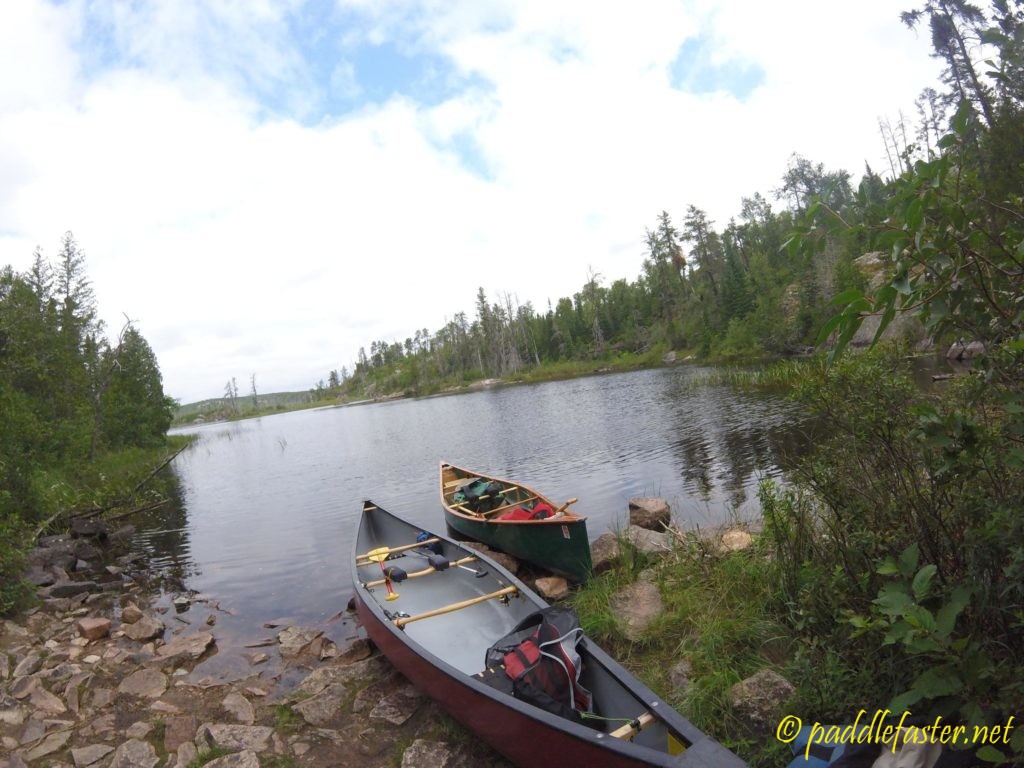 In Granite Bay we came upon a group of 7 college age adults in 3 canoes waiting a good distance offshore for us to clear the portage. We approached & exchanged pleasantries. They were essentially doing the same route as us except in reverse. We swapped some intel about the areas where we had come from & some of the girls in their group seemed absolutely stoked to be included in our GoPro footage so here they are.

A few paddle strokes later we were at the Granite River portage, and there weren’t any photos from here it was so unremarkable. Well, except for this photo. Not sure what I was doing other than maybe adjusting the angle of the GoPro. 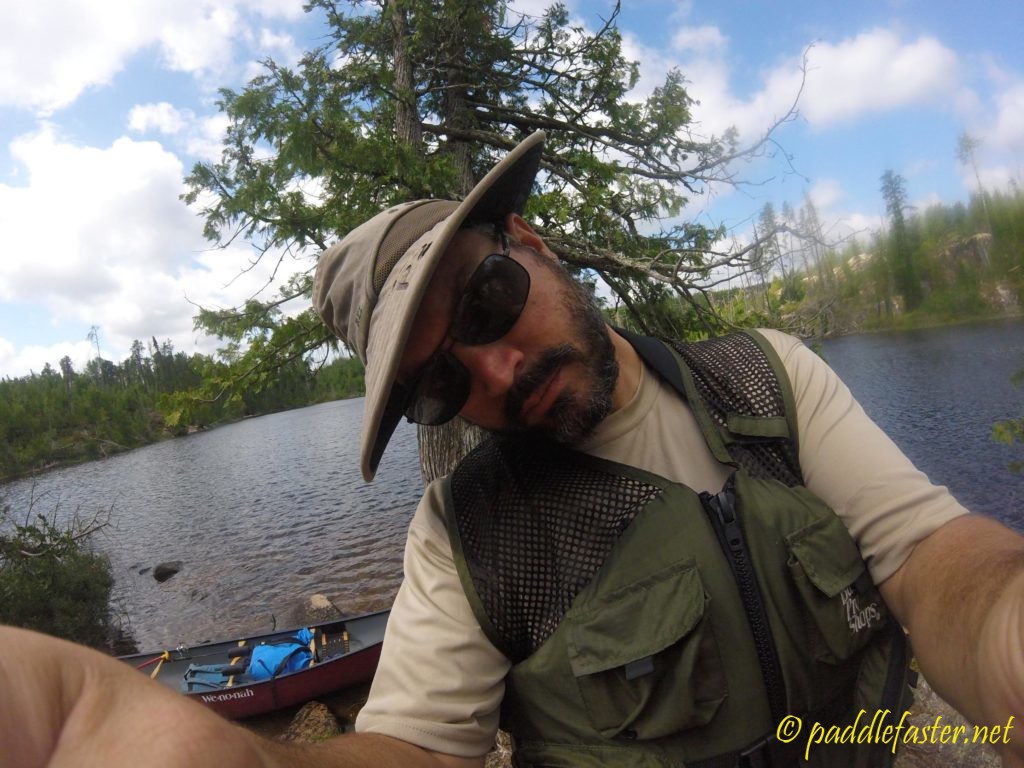 One portage left for the day! Evie decided in order to better see the map she needed to remove it from the clear map case I had it in. 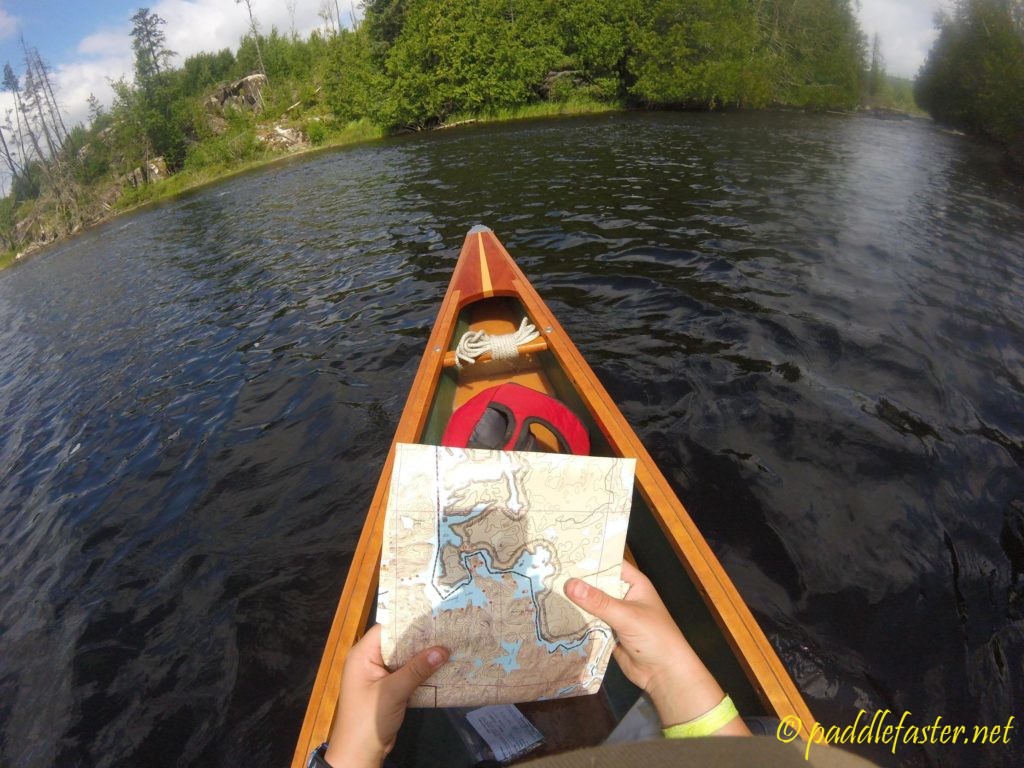 I won’t post any photos of it, but the landing of the Gneiss Lake portage on the Granite River side is a little bouldery and technical. Evie lost her footing & ended up landing on her butt in the water. I laughed at the silliness of it, but she got mad at me for laughing at her misfortunes. Photographs of her in the water and/or me chuckling at her may or may not exist. Shhh…. they do. I met up with her later on the portage trail and talked to her about laughing at situations versus people, then I gave her a peace offering of some raspberries. She eventually forgave me. 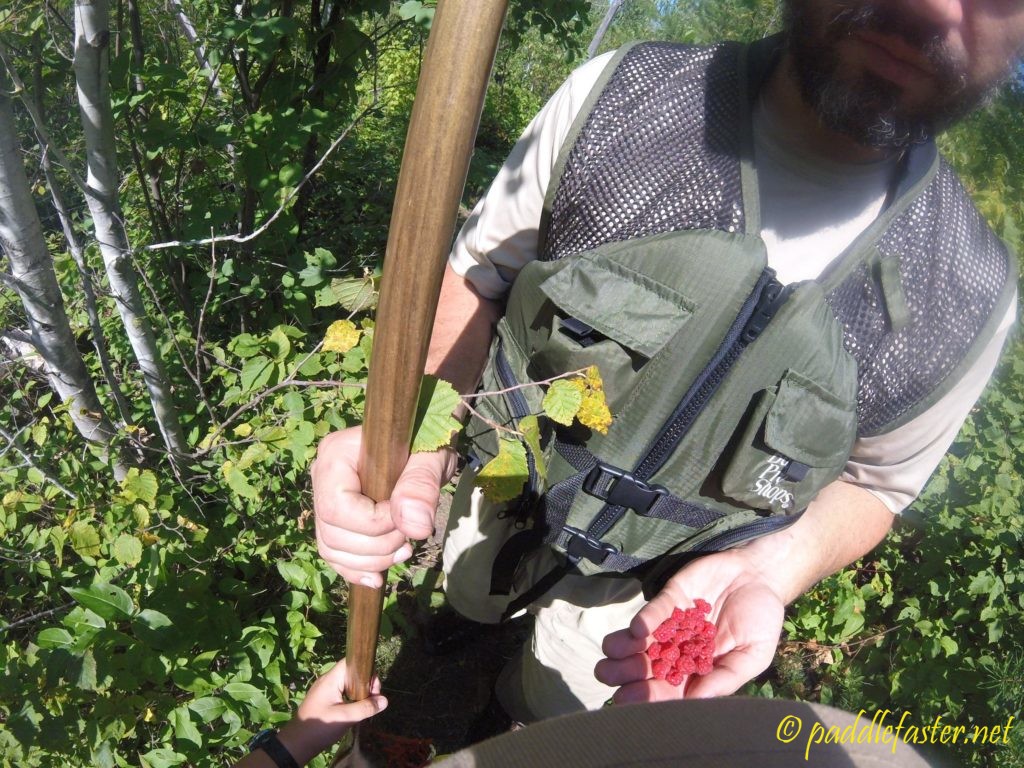 The rest of the portage went smoothly. I guess no shots of it got captured by the GoPro & I must not have taken out my phone to get any, but I was awed by the destruction on the Gneiss side of the portage landing from recent windstorms. The portage itself was perfectly fine for using, but earlier in the summer some pretty massive pines had been taken down by winds. It would have sucked trying to go through this portage in the aftermath of the storm.

Once we were on Gneiss we were in campsite hunt mode. Our first target was the 5* campsite on the island, the only one in the area. From several hundred yards out I could tell it was occupied, and maybe only recently judging by the state of camp setup they were in. It was OK with me that we didn’t get the island, as all of us wanted to push a little farther towards the Devil’s Elbow area. At the northern part of Gneiss, where it turns West towards the Elbow we really encountered our first ‘issues’ with the wind because it narrows and channels the wind. Evie & I did OK but Matt & Grace got weathervaned at one point and had to swing around for a second attempt. 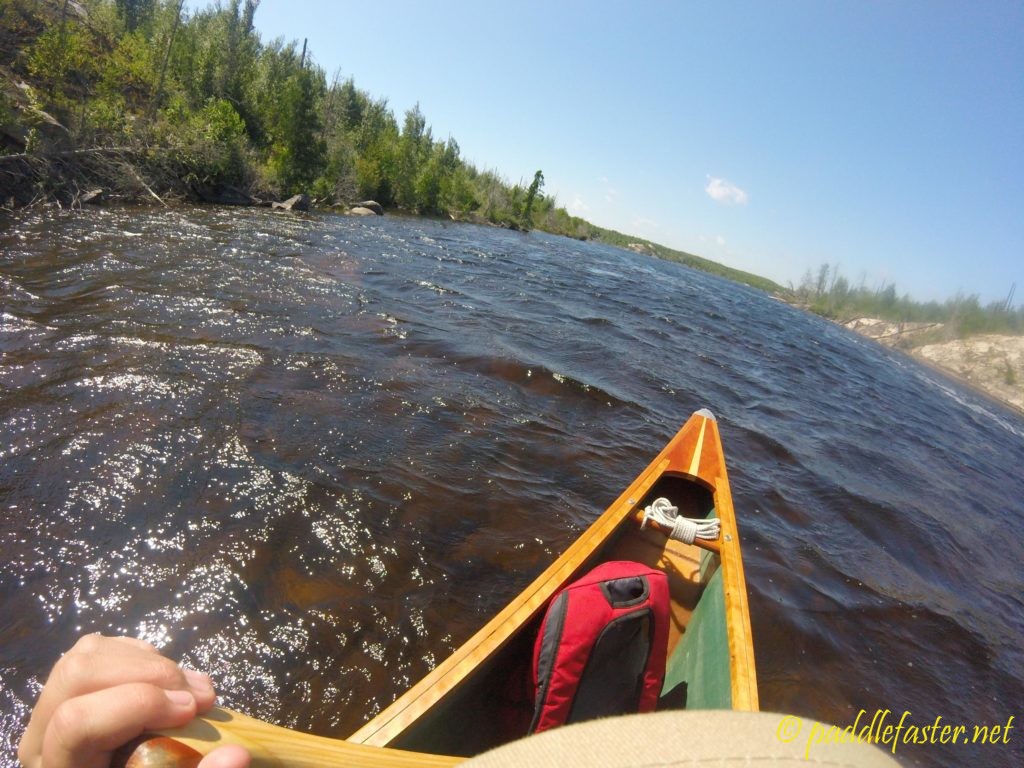 This next photo is right after we’ve passed through the narrows of the Devil’s Elbow. At its widest spot it is maybe 20′ across. Canada is the shore off my right shoulder and the USA is my left. 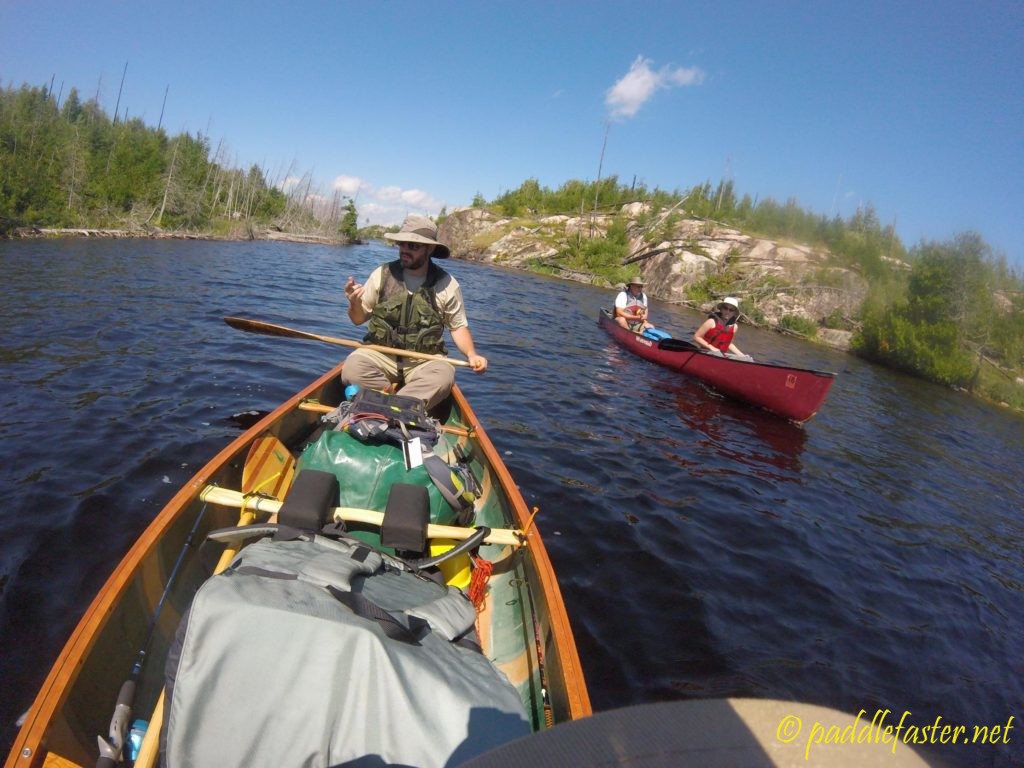 We battled the wind all the way across Maraboeuf and were rewarded with our desired site being available. On the map it looks like there are 3 sites all on the same bay & the reality of it is there are 2 sites on a bay and then around the northern side there’s a little bay that is covered by the campsite dot on the map. That’s where this site is located. The landing was a little tricky, we essentially had to land and unload one boat at a time, but we got it done. 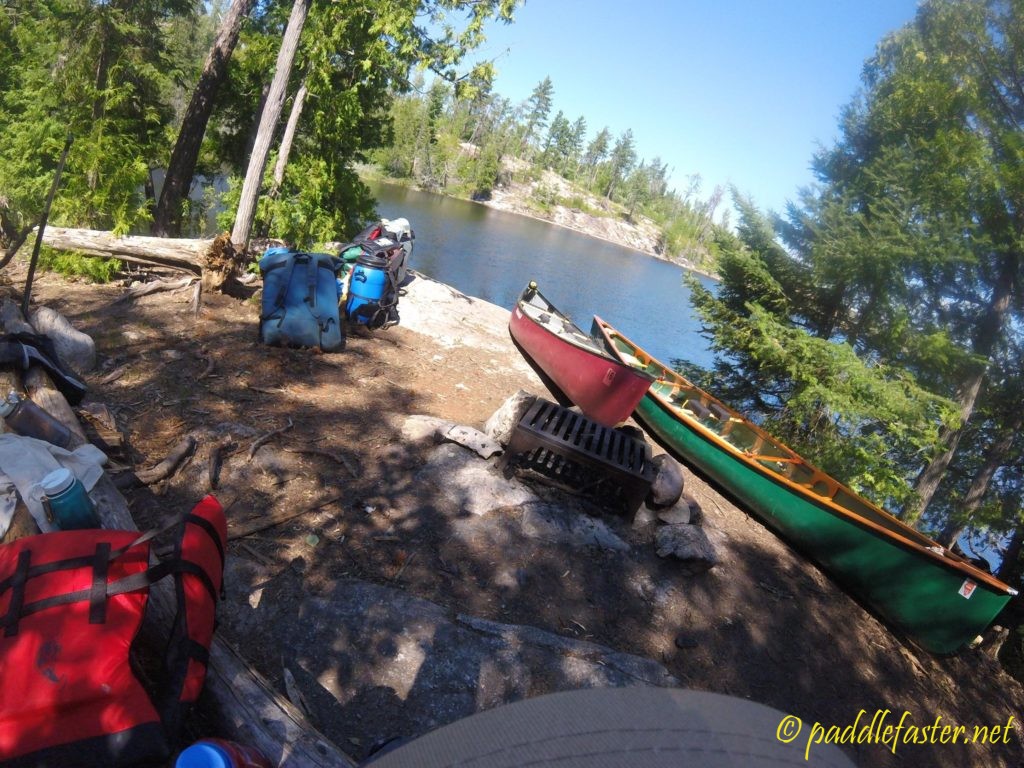 Evie kept wearing the GoPro while we were setting up camp. This was a very intimate campsite… There was 1 really good tent pad and another that would have better suited a smaller tent than the 3 man I had for us. In the end some creative staking and bungee dealie bobs saved the day. 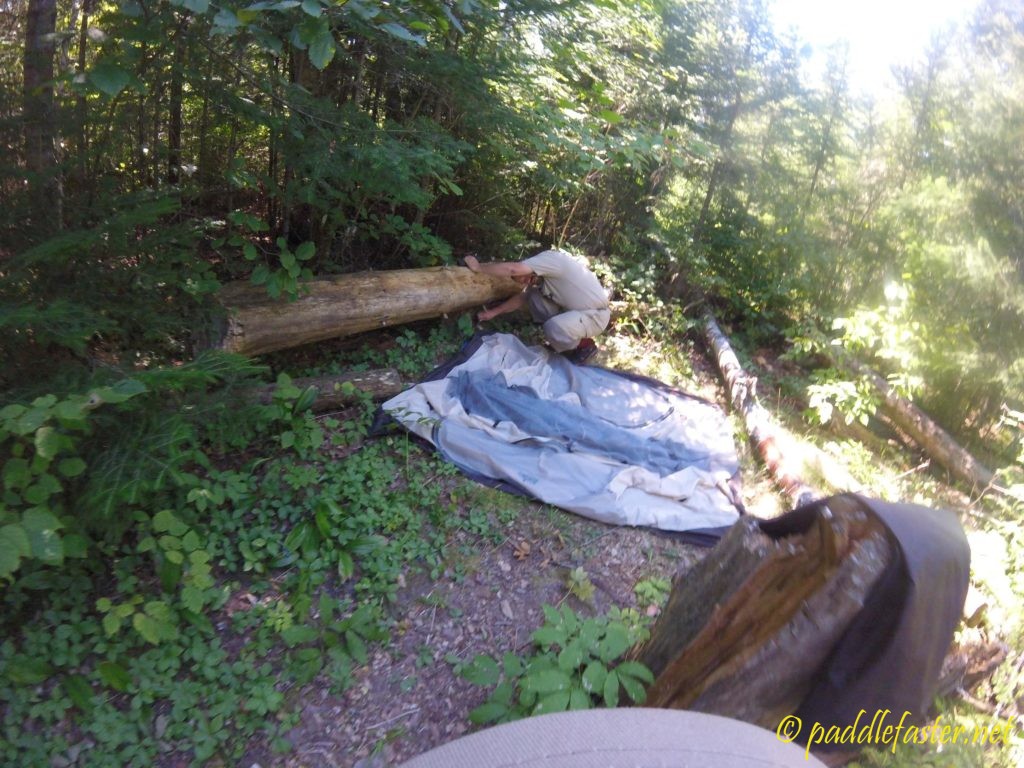 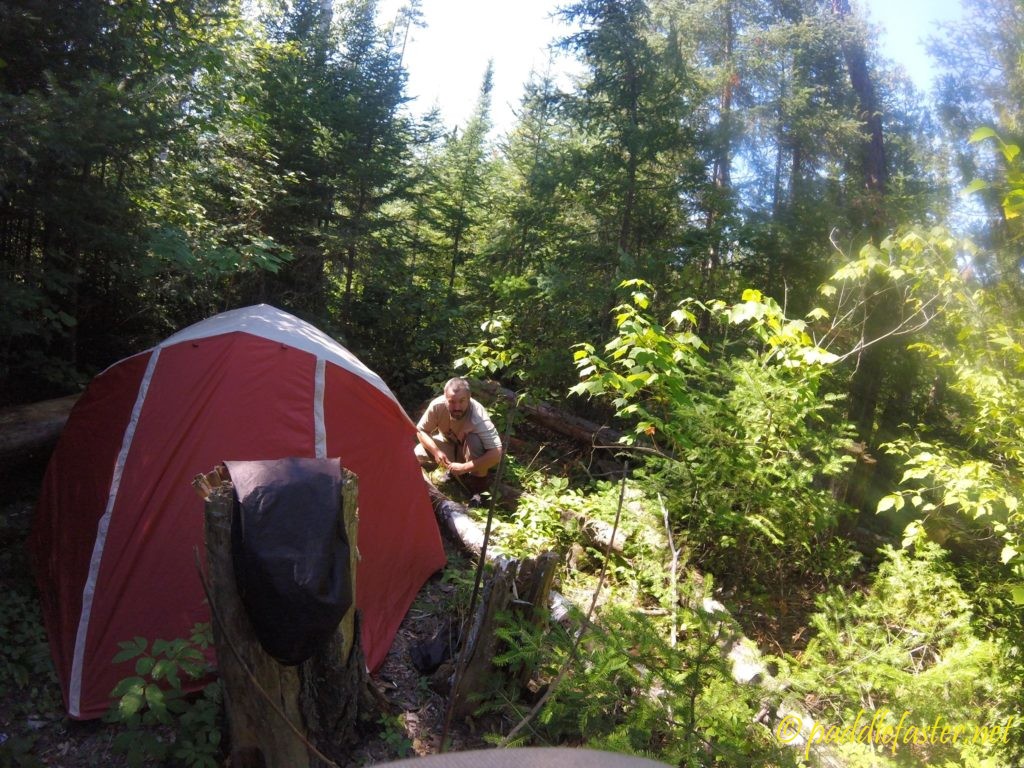 After tents were set up and our gear stowed inside Evie decided to wet a line. 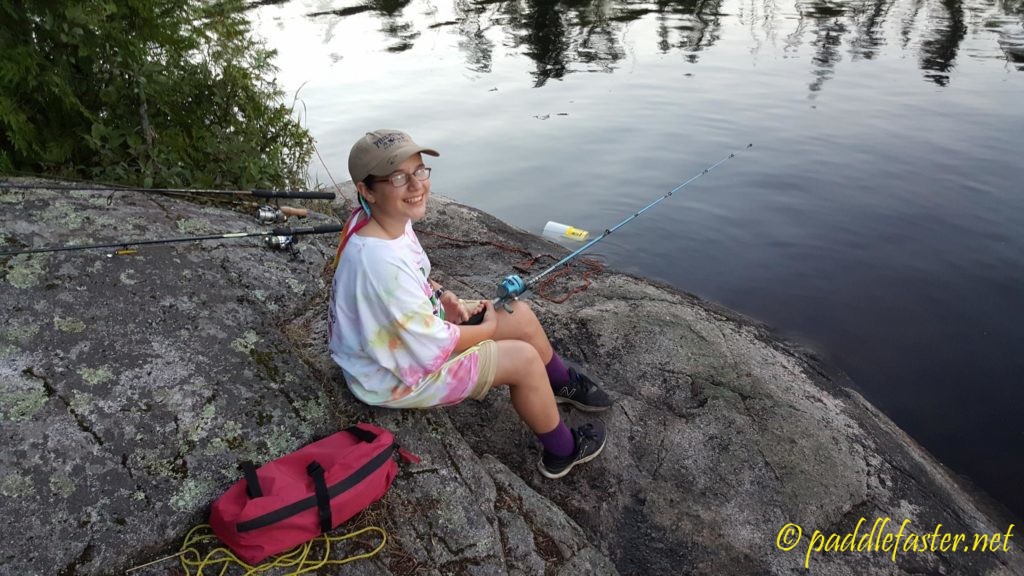 There was some wood at the site however much of it was green or half dried smaller branches from trees that had been blown down earlier in the season. Matt & I took a paddle out to the rocky slope past our campsite to go harvest more cedar. Our efforts were rewarded very well and we even found a really awesome blueberry patch. Pancakes were on the menu for the morning so I declared that after we got back to camp from getting wood I’d go back out with the girls to get some berries. Less than an hour of picking yielded this: 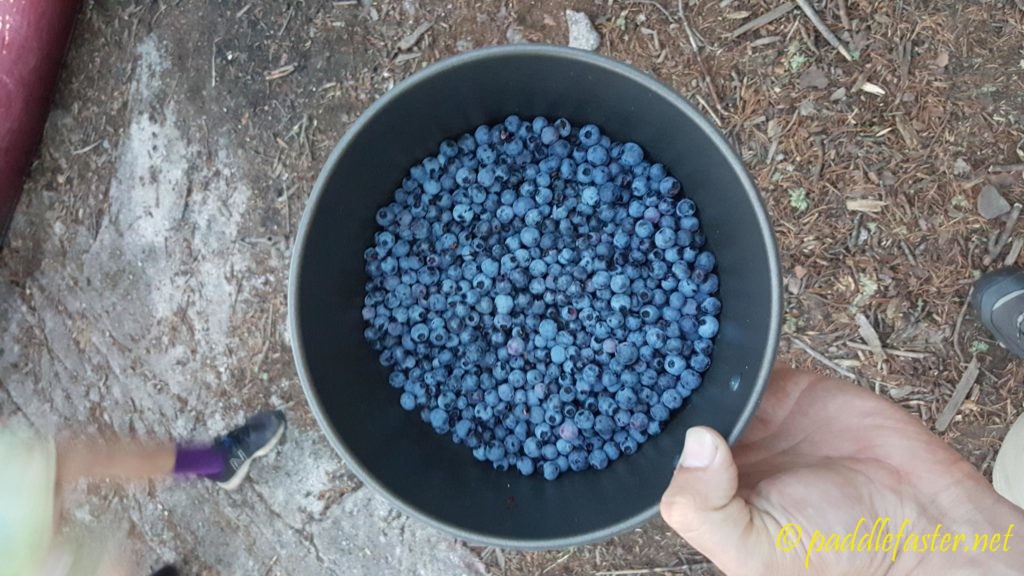 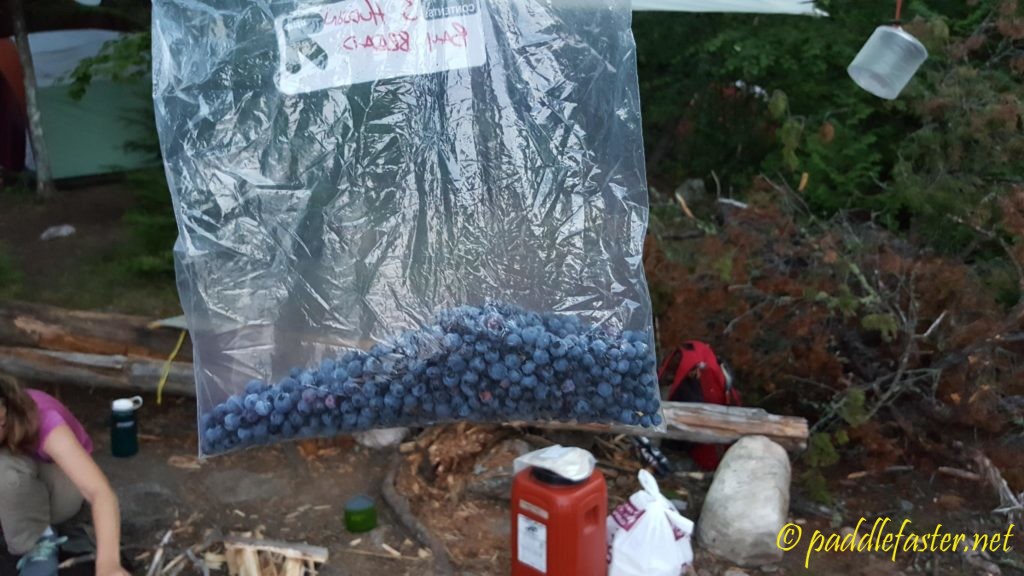 Dinner got made, dehydrated beef stroganoff. It was eaten & declared yummy. We then decided to turn our attention to the fruits of our fishing ladies’ efforts from earlier – two smallies on the stringer and needing to be butchered. Evie was very curious about filleting the fish and only showed a little bit of concern for the fish themselves. 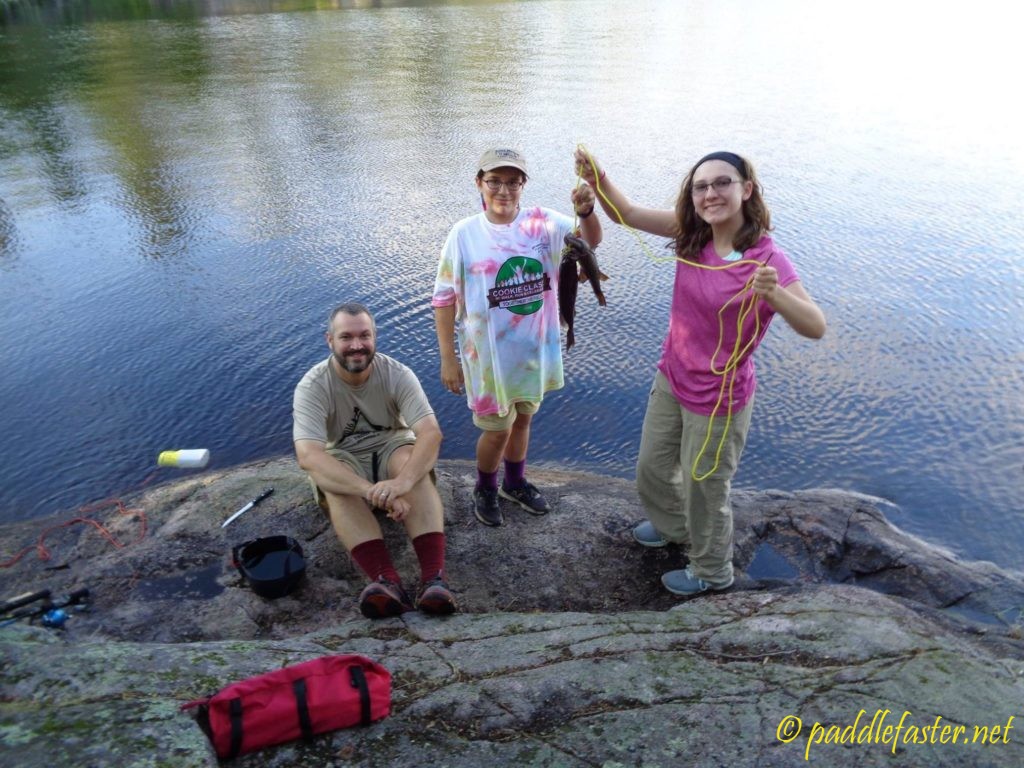 After we were done filleting them she went out with me to dispose of the remains. The fishes’ existences were still on her mind and we discussed the nature of things and said a word of thanks to the fish for giving themselves to us to help replenish our strength and nourishment. Back at camp, we set up an assembly line with Grace managing the breading of the pieces and me doing the frying. The fish was consumed in short order and declared very delicious. After everyone got used to the initial bite of Shore Lunch Cajun breading it was agreed it was a great product.

Before the sun completely set we were given a treat of a rainbow (don’t think it rained on us this day) and just nice, peaceful views of the lake from our campsite. We saw no one on the lake after we passed the island on Gneiss, it really felt like the lake was for us only and no one else. 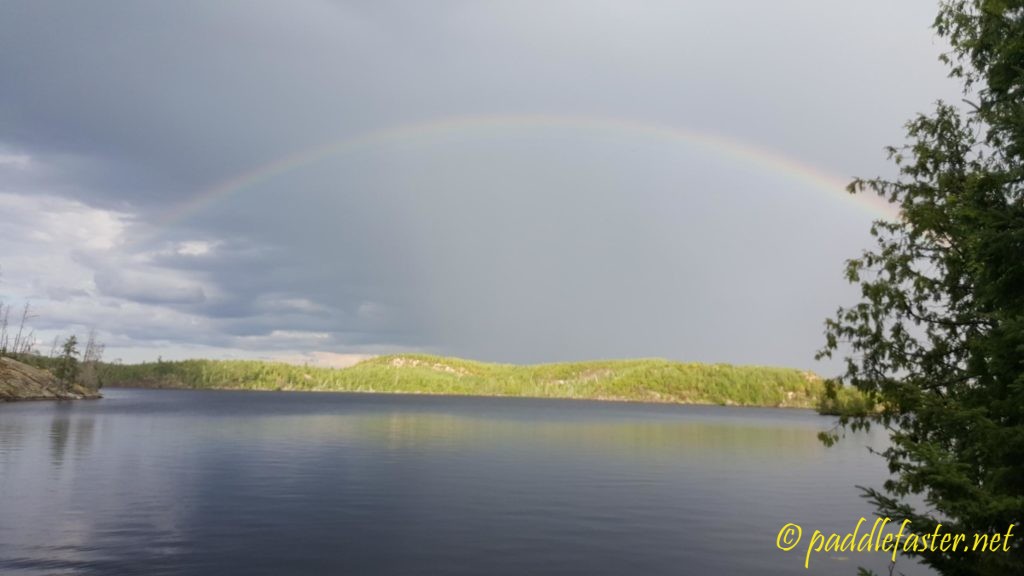 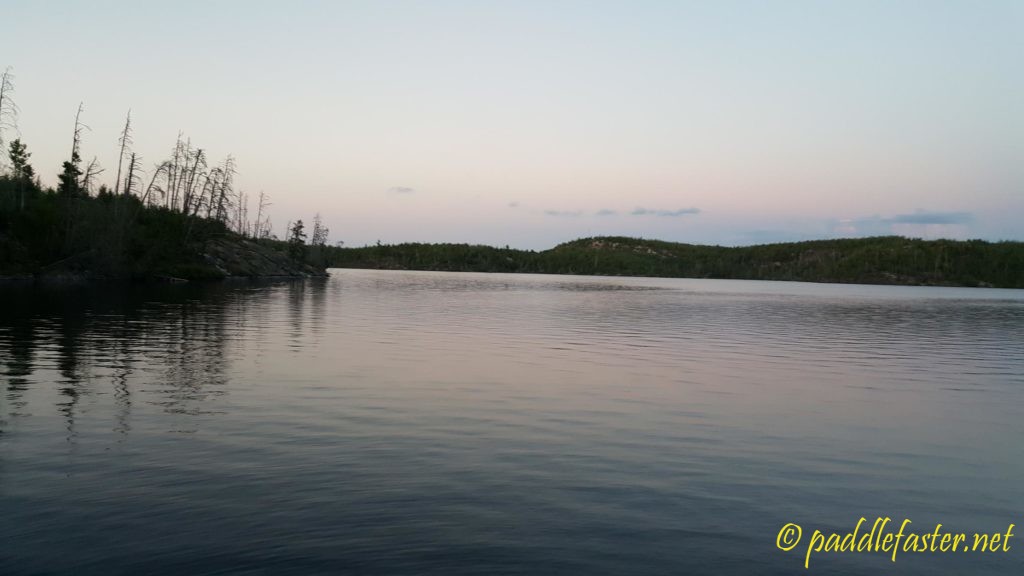 Once it got completely dark the mosquitos came out. They weren’t too bad, about what I would consider average for August. Our site on Clove we didn’t see a single mosquito around, even on the latrine trail. Grace decided it was full bug protection time and busted out the head net. I got out the Ultrathon and smeared on a little lotion. 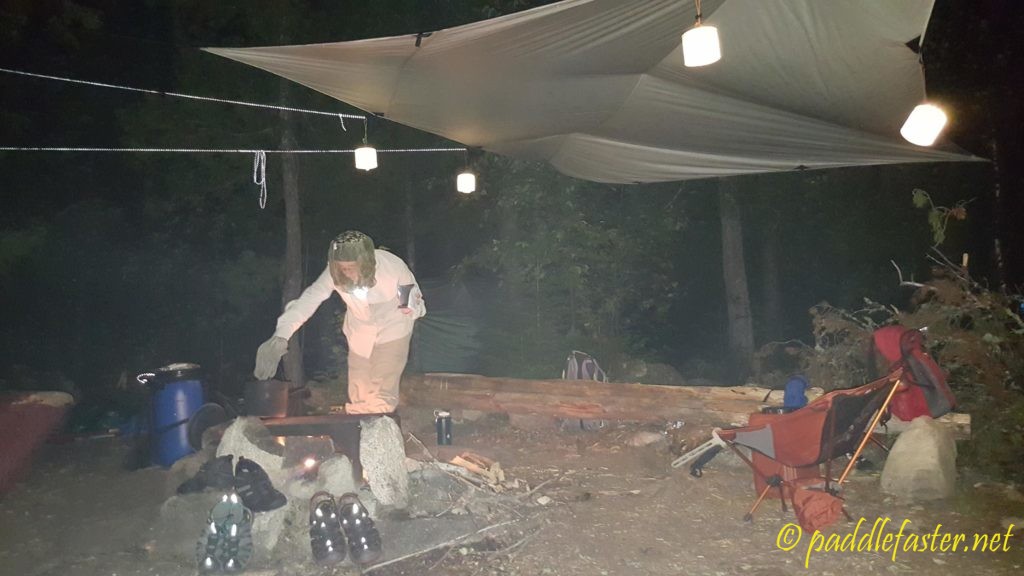 The weather radio is making it sound like rain is almost a certainty for tomorrow so we try to leave the fire pit as best staged for rain as we can. I’m happy to have my Guide Gear tarp along, I should have bought two of them when I did… such a good value for $20.