Awakened by rumbles of thunder & the sound of rain hitting the tent about 1AM. I usually don’t mind sleeping when its raining or storming but the especially rough summer they’ve had up in this area has me spooked. I can’t get back to sleep so I write in my journal for the next hour or so before I realize my eyelids are getting droopy again.

Wake up again about 7AM. Today’s plan is somewhat of a repeat from a few days ago – layover, maybe do some fishing later. While I’m waiting for Matt to get up I survey my tarp rigging & the aftermath of last night’s rain on its pitch. I make some adjustments, and a good thing too because shortly after Matt gets up it starts raining for the next hour.

Breakfast takes its customary 3-4 hours to complete and today’s pancakes are augmented by the blueberries we picked yesterday afternoon. Evie seems to have taken a shining to being the pancake maker and Grace is pitching in by being the berry spreader. In the end its a good arrangement and they turn out some good cakes. 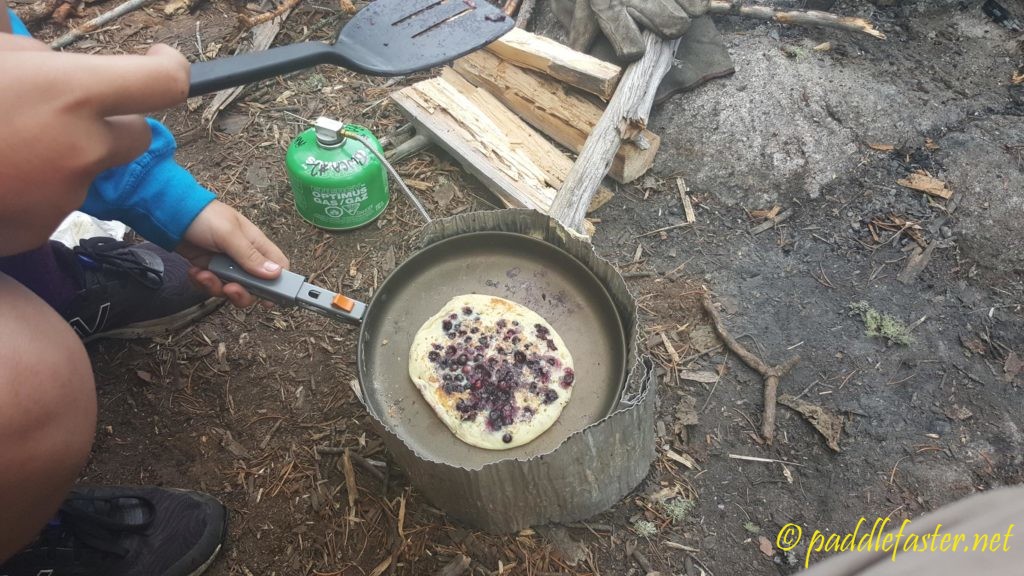 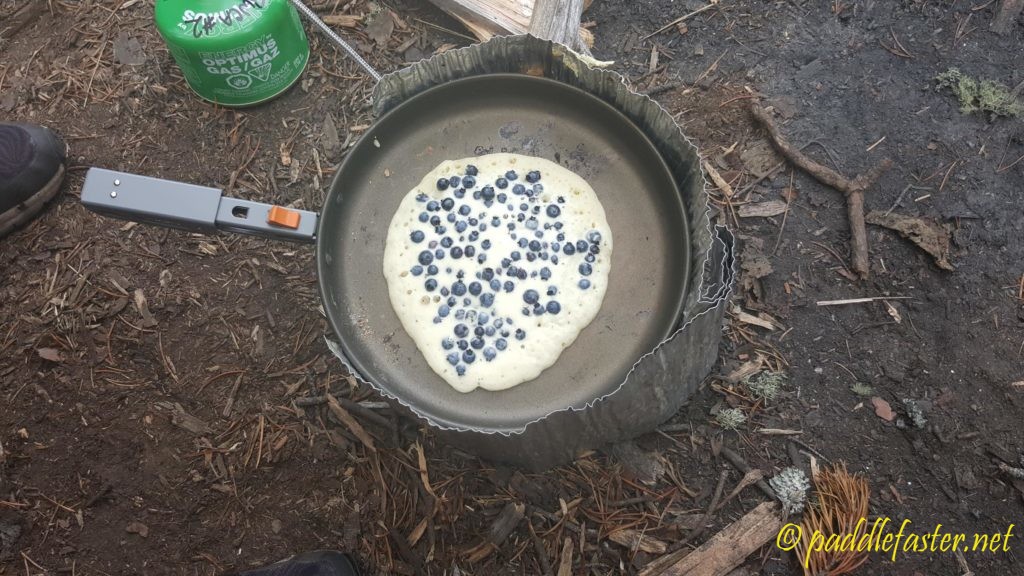 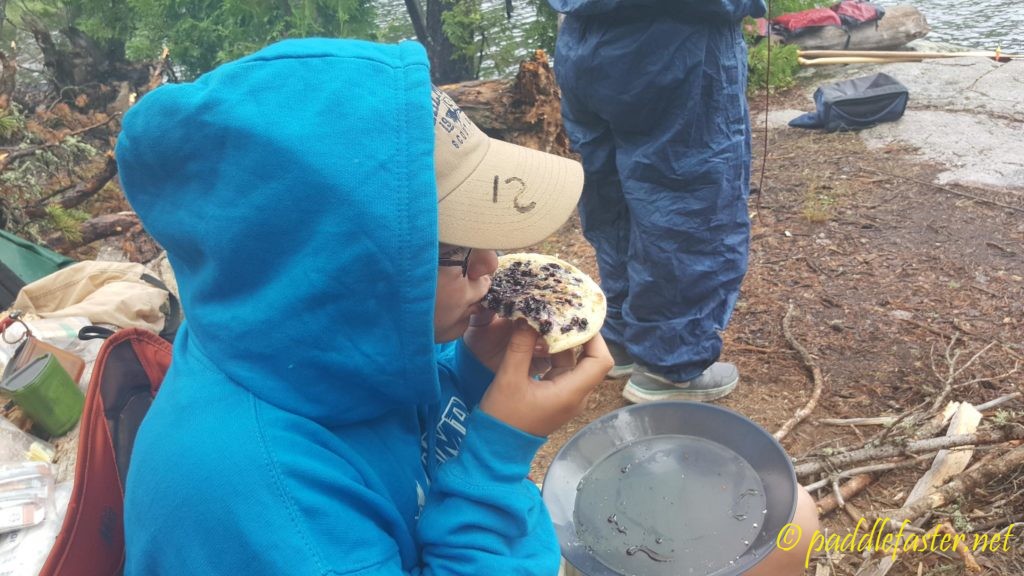 Apparently I didn’t take any photos later in the day, and the GoPro didn’t take a charge so we didn’t have it along for automated photo capturing. Here’s a couple other random shots from around camp. 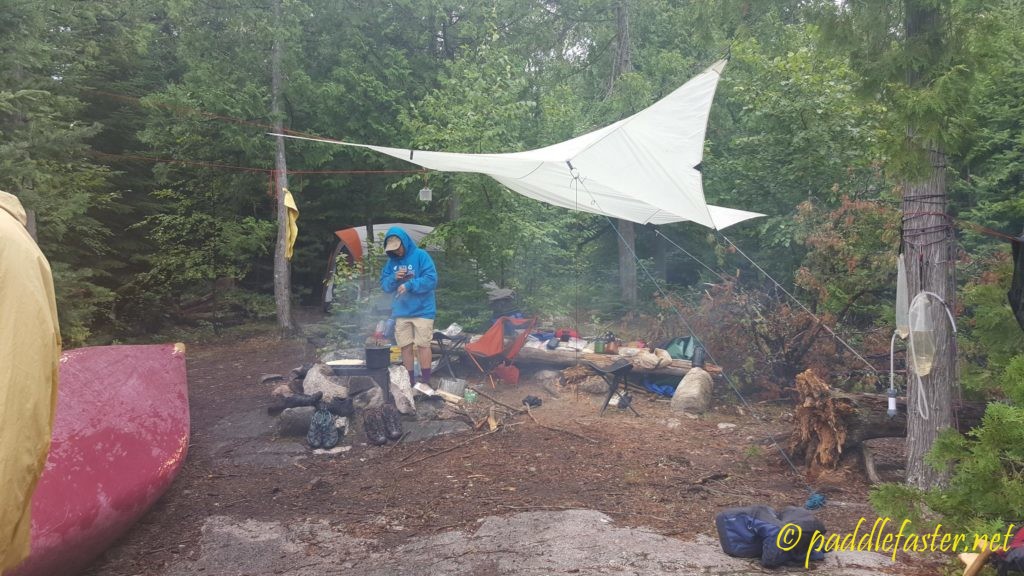 Grace and her entirely too large raingear:

Our fishing target for the day, and island with an offshore hump that is reportedly good for eyes. We went out and fished around it a while, but lack of anchor plus South winds made it hard to effectively fish with the near constant need to correct the boat’s drift. 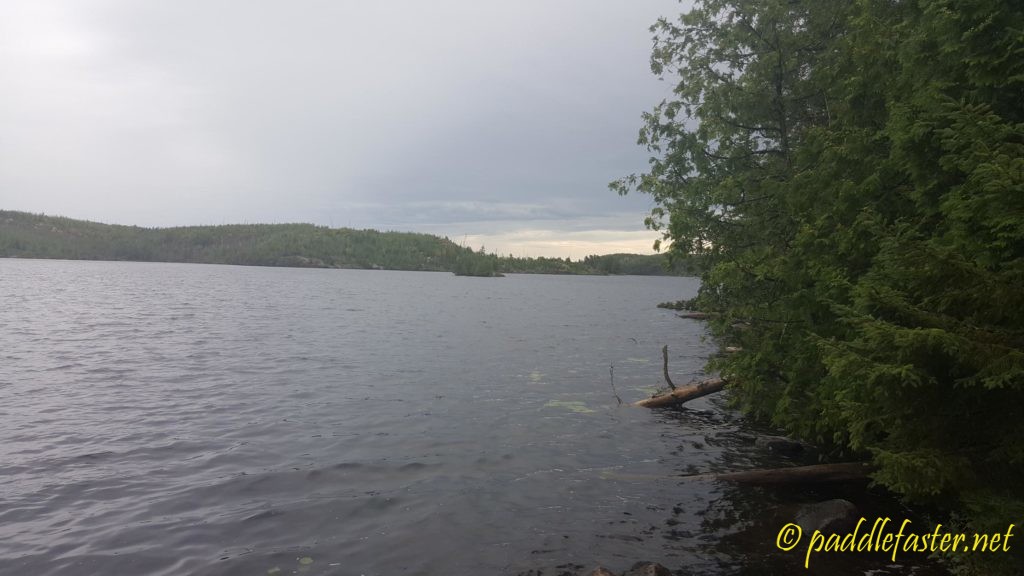 Eventually both boats decided to work the area in the bay to the South of the peninsula we were camped on, back towards the other two sites. I eventually hooked up with a small eater sized smallie, almost got another with a plastic worm rigged weedless back in the lilies but it didn’t work out. We met back up with Grace & Matt further up the bay and we all agreed it was time to head in. We’d have the fish as an appetizer for pizzas!

Back at camp the fish was quickly filleted and Matt & I disposed of the remains. The fish was delicious as ever and soon we were preparing our pizzas. I wish I had a photo of the pizzas on the grate because they turned out really awesome. I ended up trading with Grace, however – Right before they got taken off the fire I lifted hers to check doneness on the crust and it slipped off the spatula and ruined the topping. I gave her mine as a mea culpa for dropping her pizza. Ah well…

Coffee and cocoa were had, dishes got done. Tomorrow we’re paddling back almost all the way back to civilization. Our plan is to camp somewhere on Sag around the corridor so our exit on Saturday is easier.