I’m the first one up today. Its funny how I can be at home and would sleep until noon if I could, but lately when I’m camping I find myself getting up around 6:30. At Philmont a few weeks ago we were regularly waking up at 4:30-5AM, so maybe there’s a little of that hanging around still. Regardless, this is a trend that would play out for the rest of the trip – myself and Matt would generally get up at least a half hour before the girls and get water hot for coffee/cocoa/oatmeal, etc. Once we’ve had a cup of coffee we would then rouse Evie & Grace and go about our plan for the day.

Today’s plan is nothing, except maybe for doing some fishing. The plan for our time in the wilderness is to travel, then layover a day. We’ll repeat this two more times before paddling out after a week spent in Canoe Country.

This is our first morning in, however, and right now the world is quiet and still with a thin layer of fog lifting off the lake in the morning sun. 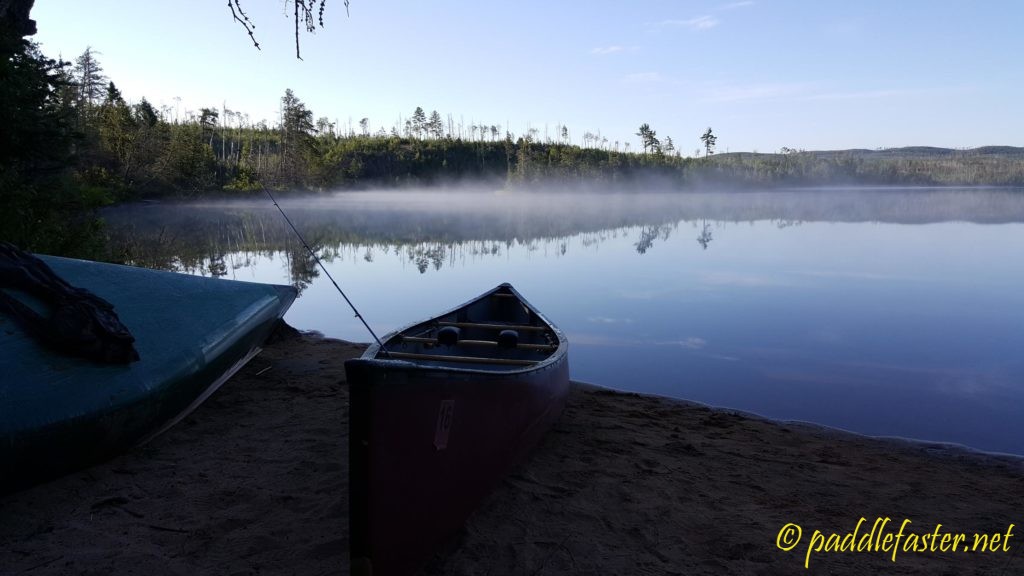 On the way back to camp along the latrine trail I notice a neat looking fungus growing on a stump. 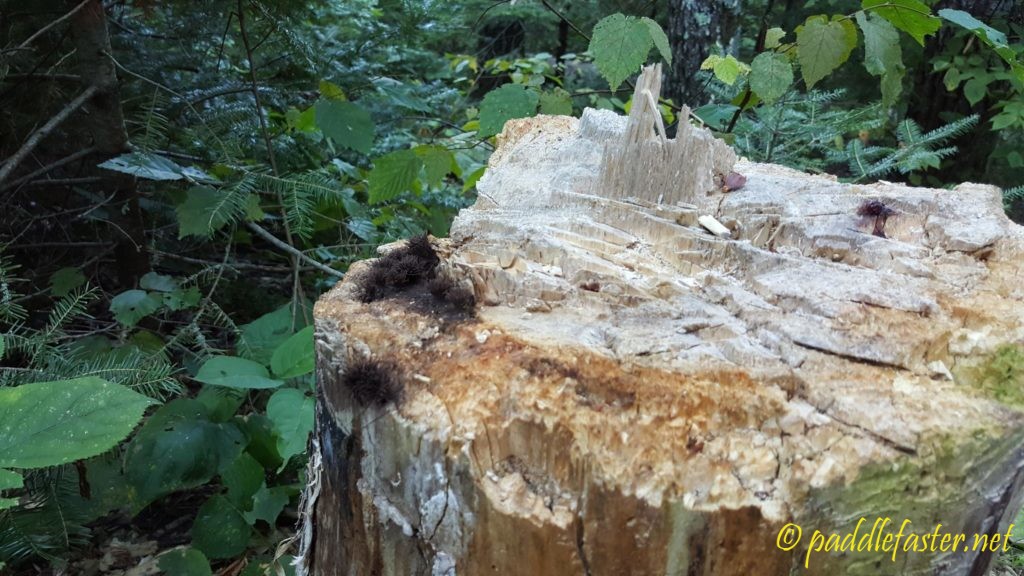 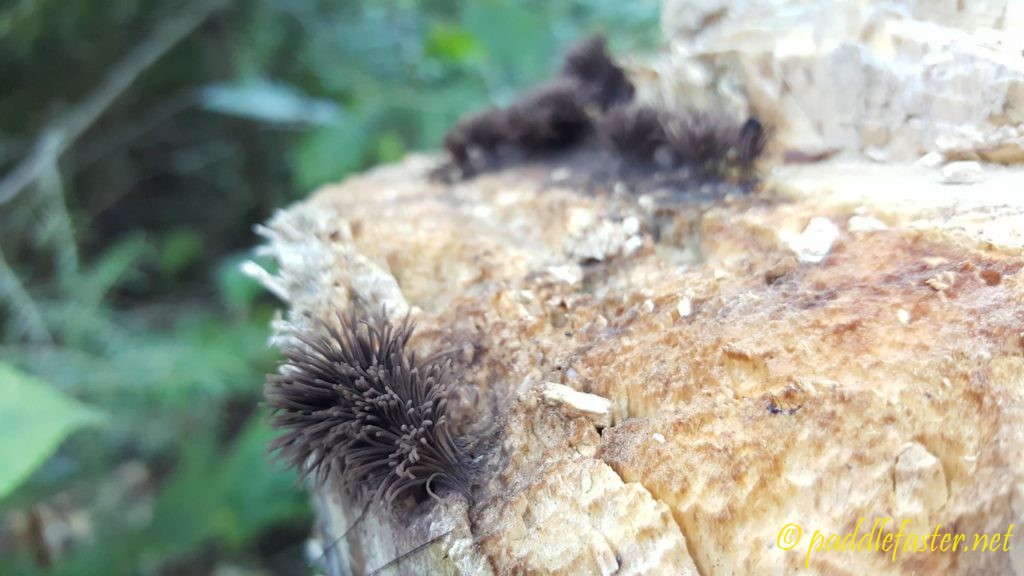 I spend a little time in the light of day figuring out how Evie got her line & my lighted bobber up in the tree and my efforts are rewarded with it popping loose and landing near me. Too bad I won’t have the use of the light for the rest of the week but happy to have the tackle back. I spend the next half an hour soaking in the quiet of the world around me and taking in the view of the lake as the fog playfully curled and lifted from its surface. Before long there’s a rustling sound behind me & a couple minutes later the sound of zippers announce Matt’s exit from his and Grace’s tent. Coffee is made and Matt begins to absorb his surroundings.

I get to work breaking down some of the firewood we harvested the evening before. It really is true that if one merely paddles down the shore a couple hundred yards there is nearly an unlimited supply of quality wood for burning. I’m sure its moreso true in the areas affected by the 1999 blowdown than other parts that were spared the various derechos and subsequent fires in recent history, but I’ve generally found it to be the case anywhere I’ve visited. This morning I’m using the Sven Saw to take a cedar trunk down to 12-18″ long sections so they can be batoned into burning pieces. Its amazing how twisty they get, when examining the grain on the logs to look for natural splits to use to my advantage. Later in the week when both girls learn how to process firewood this will be a valuable teaching point.

The girls are awakened and we go about making a layover breakfast. Today’s breakfast consists of scrambled eggs, bacon, and hash browns. Start to finish the whole process takes nearly 4 hours and during this happens the calm conditions from earlier has transformed into a constant 10-15mph wind from the South, piling the lake up onto our campsite. Evie wants to fish but soon discovers the futility of trying to cast into the wind and having your bait blown back to shore. She settles for hanging out under the tarp and reading one of the books she brought along. At some point we play a very long game of Uno using one of the canoes as a card table. The boat as a table worked out pretty well once we got it positioned, but we had to constantly be aware of the breeze and not let it take any cards away.

Midafternoon we decide to go out for a paddle and fish the rapids back by the portage into Clove.

The wind’s still blowing about the same and we discover that it looked worse from shore than it actually was out on the lake. Both boats make several passes at the rapids and come up empty handed. Evie gets bored and we pull off at a spot that looks almost like a landing and she goes off to explore the rapids. I hang out on shore and fish the rapids a little while longer but there’s no interest in whatever I’m casting. I decide to see if I can find some berries or firewood and see what Evie’s up to. After I find her by the rapids we decide to go further around the side away from the rapids where it looks like better berry habitat. Along the way we got to see several bits of evidence of nature’s power. 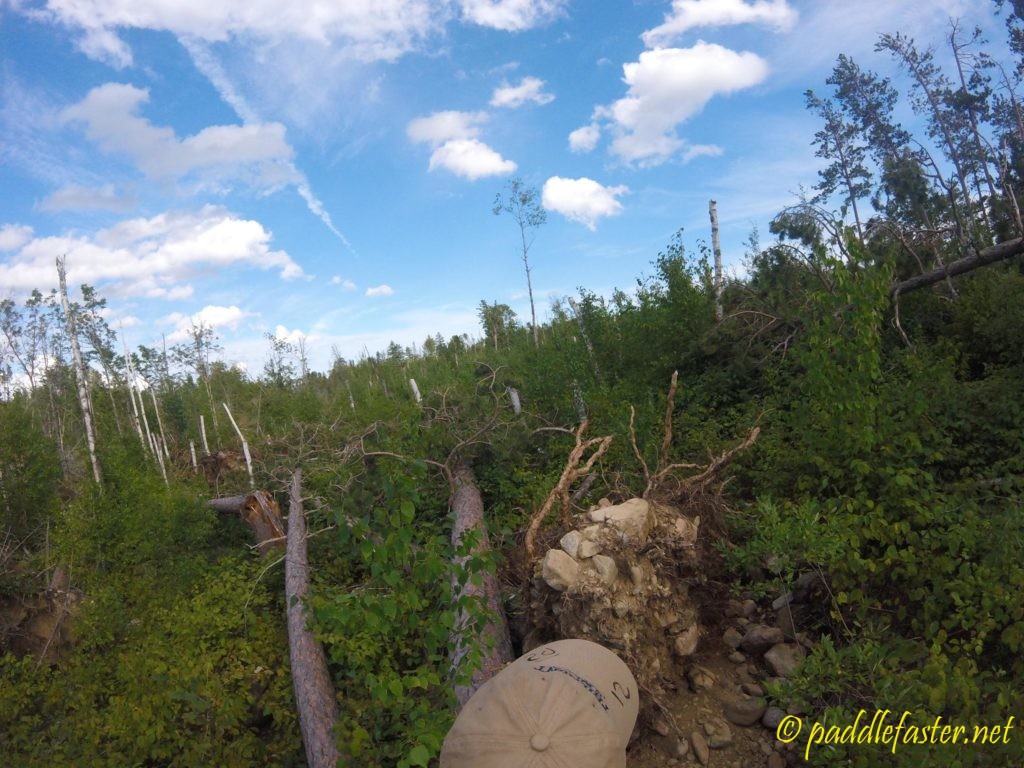 Our efforts are rewarded with finding a small patch of berries and after a half hour of picking we’ve got enough to go around. 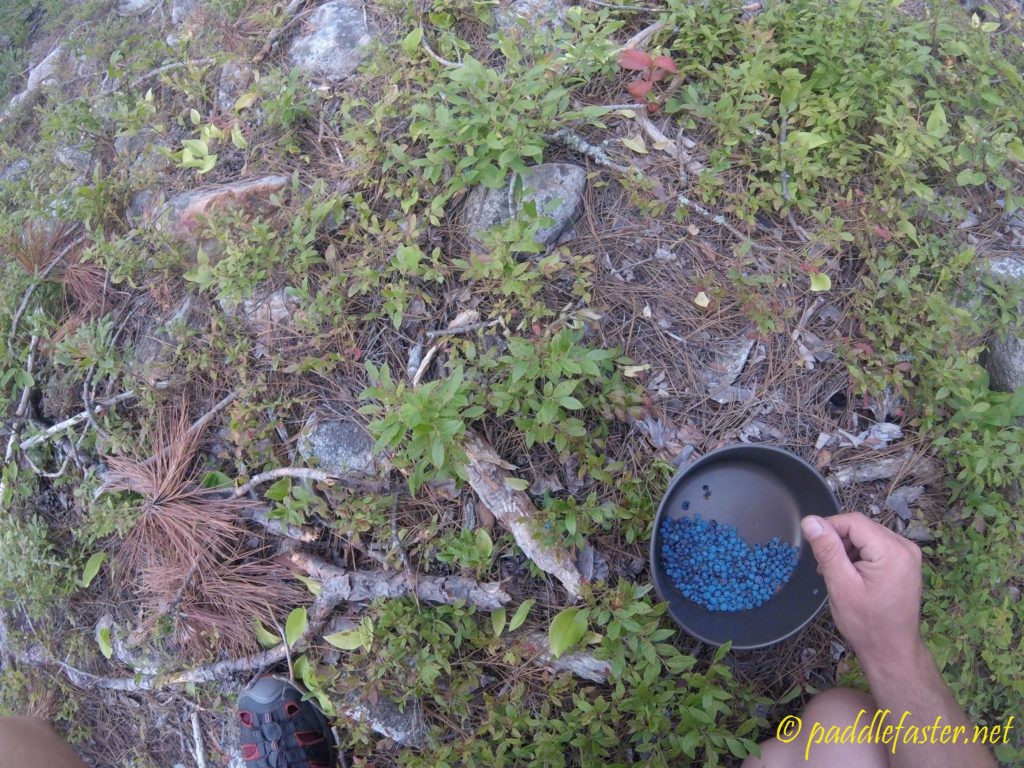 Matt and Grace are looking for us now, wondering what happened to us. We return back to the boat and load up the berries and some firewood I grabbed. 5 minutes later we were back at camp and starting to think about that night’s dinner. 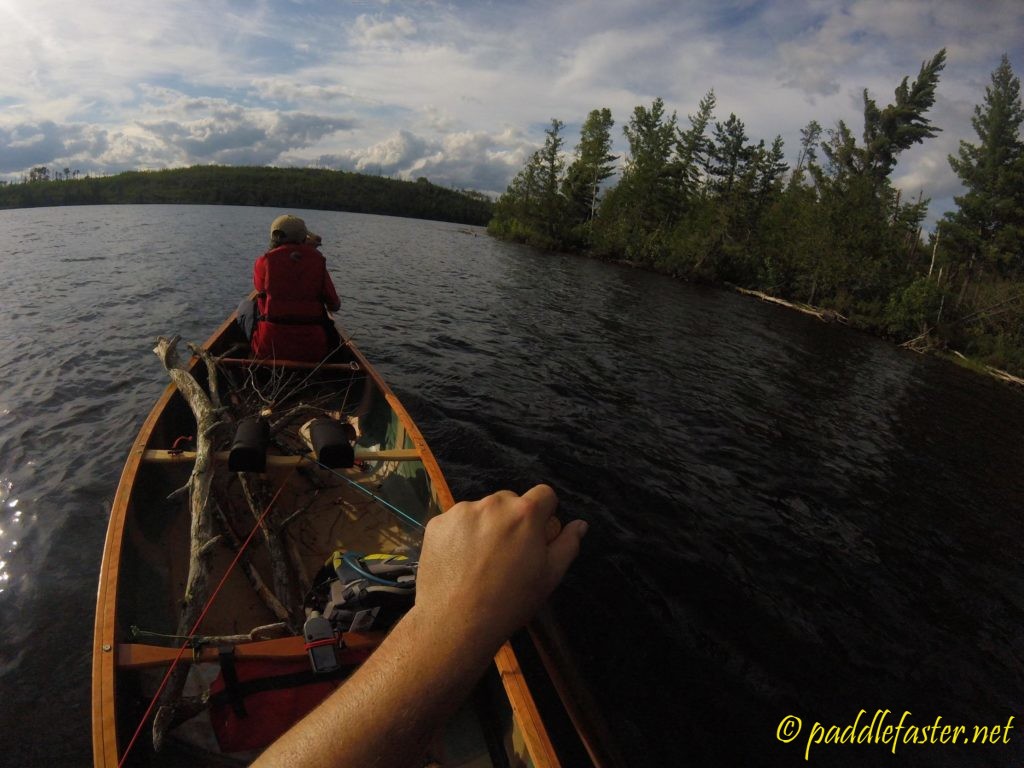 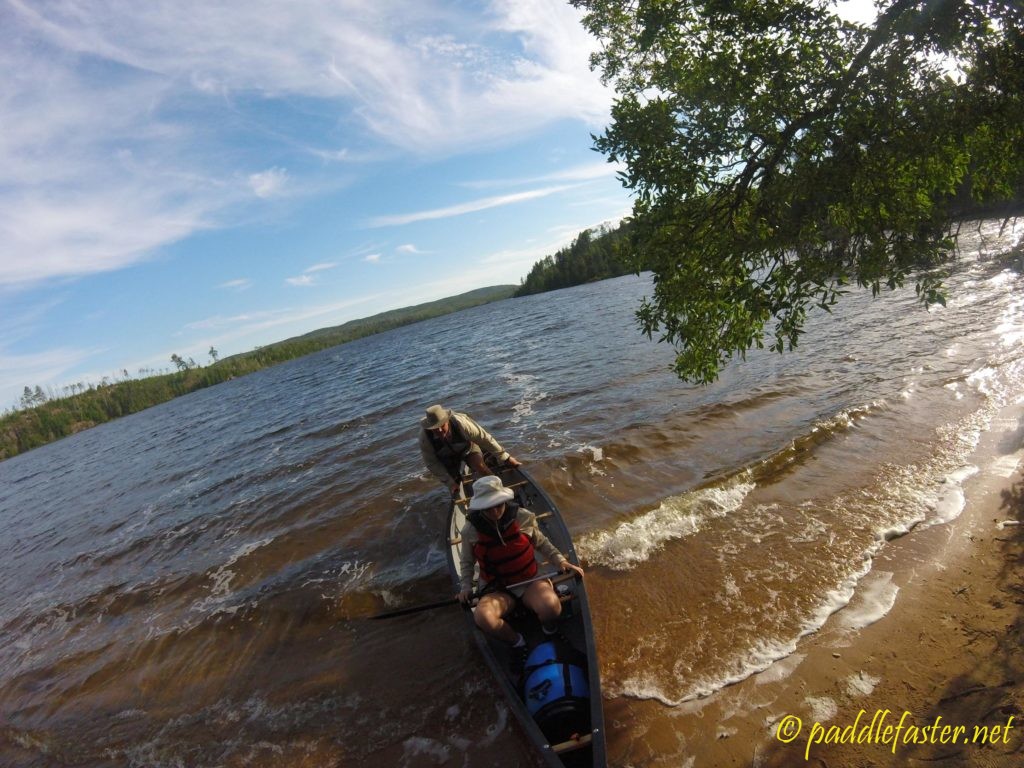 The fire gets relit, dinner is made. Soft shell tacos are served and they hit the spot. I should try to remember to toss some sauce packets into the kitchen supplies before my next trip.

The wind is still blowing and skies have gone from partly cloudy to overcast with occasional breaks of sky. The weather radio is calling for a chance of rain tonight and rain likely tomorrow. Evie discovers the constant South wind has caused a lot of foam to build up on our beach and everyone goes down to check it out. 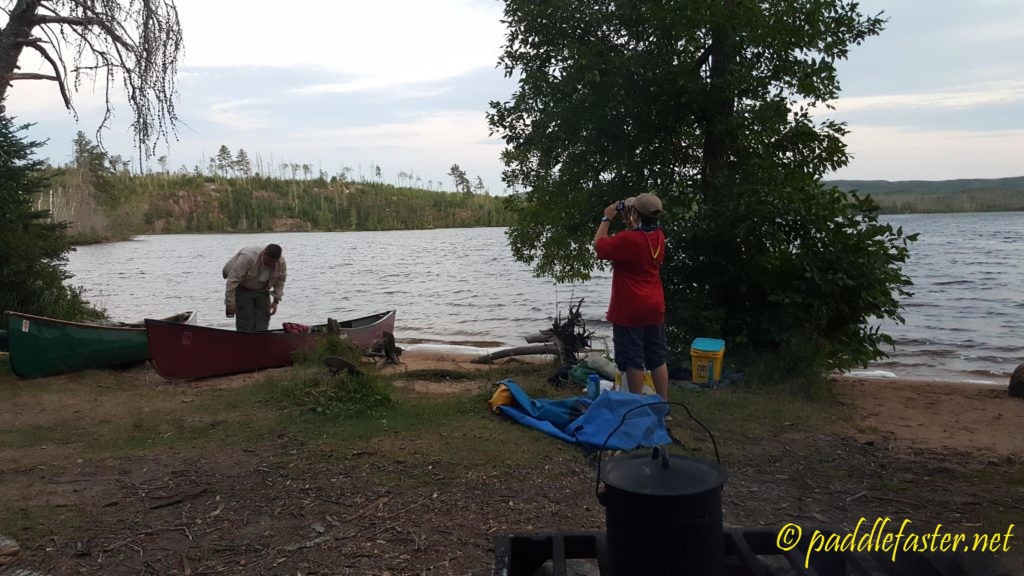 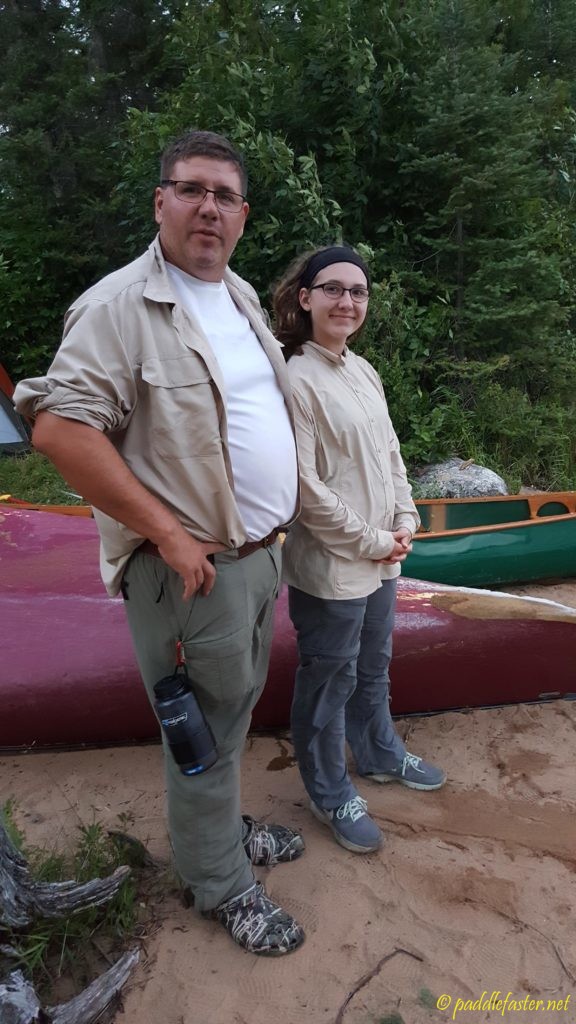 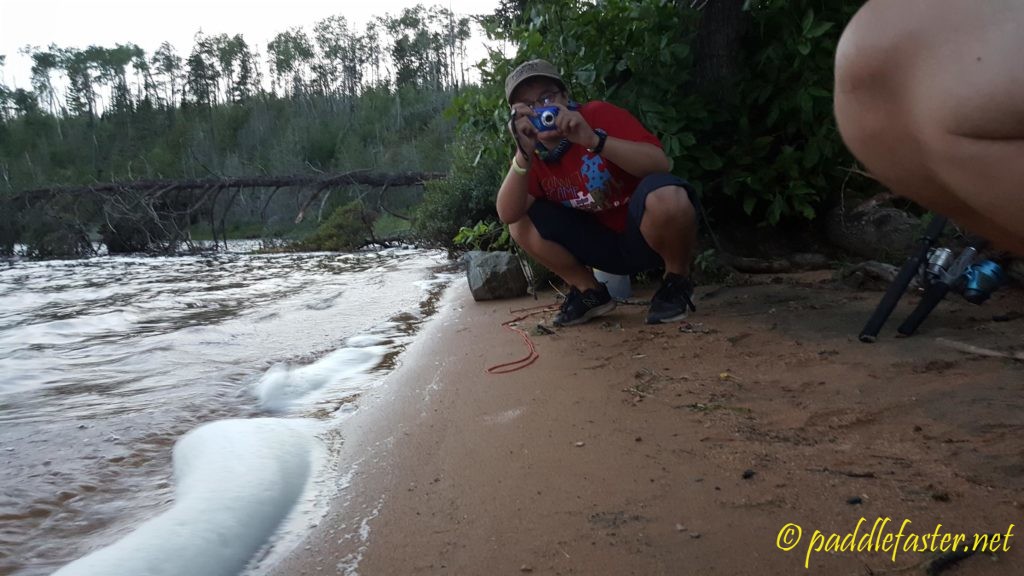 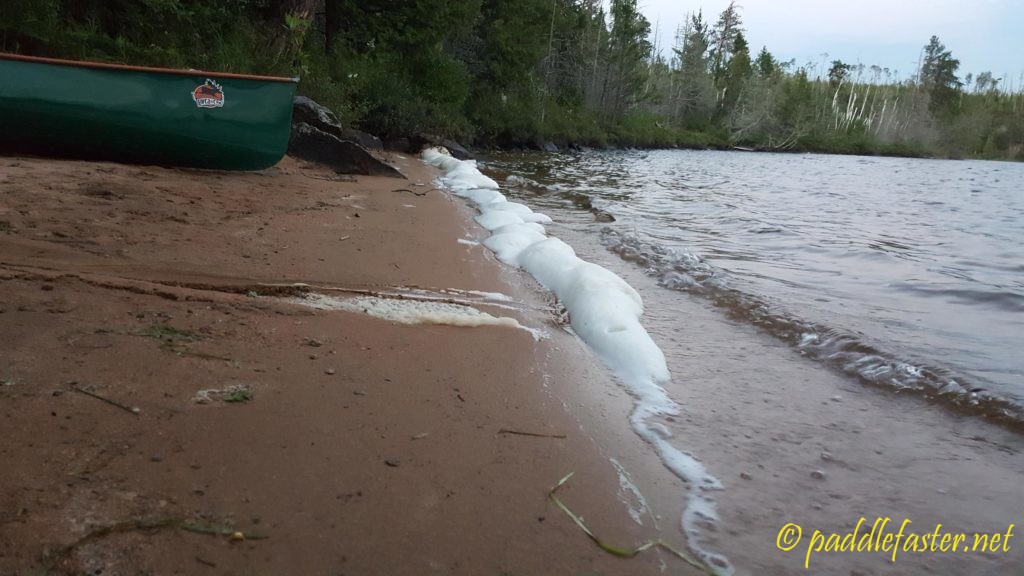 We retreat back to the fire to hang out and enjoy each other’s company. Well, Evie stayed down by the beach a little while longer to take some more photos of the lake. She also got some pretty cool video of the foamy waves lapping up onto shore. 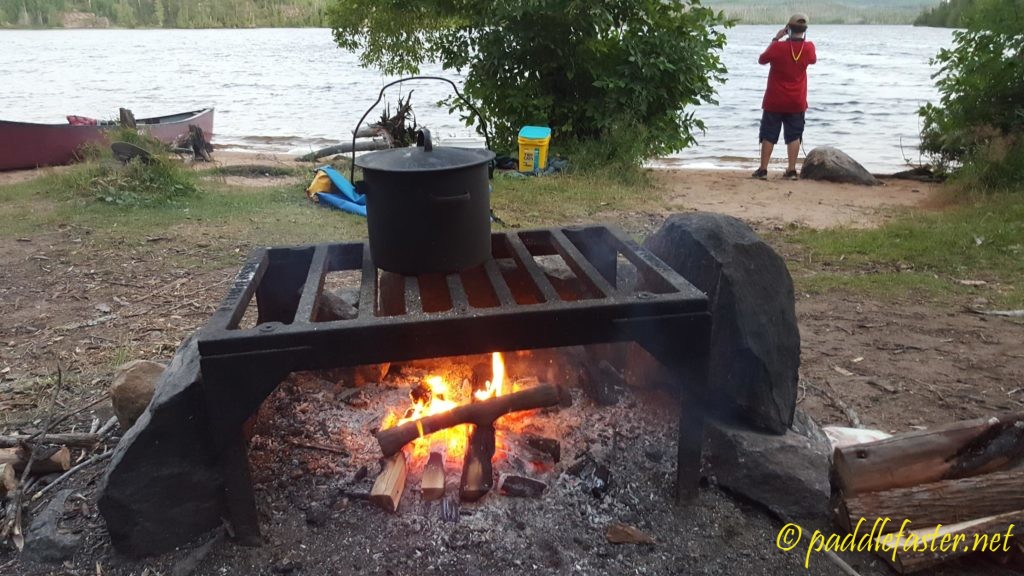 The girls hit the sack not too long after night has completely fallen. Matt and I stay up a bit longer hanging out by the fire. Tomorrow hopefully we will get to the 1st campsite in the final grouping of 3 on Maraboeuf.