We sleep in some and are out of the tent before 9. We get the food down and get coffee on. Breakfast today is a continuation of last night’s dinner. Since we’re going to have a fair amount of paddling still ahead of us tomorrow we decide to polish off the rest of the bacon and pancake mix. We find some dehydrated apples for bannock and I decide to mix them into the pancakes – works well! Note for future trips, 1 package of dehydrated pancake mix from WalMart is not quite enough for two people… only makes 5 pancakes. 2 packages is borderline too much and coupled with a package of bacon apiece we had a hard time finishing our breakfast! Not wanting to start a fire yet as we’re going to daytrip we make breakfast on the stove. This causes breakfast to drag out for a few hours, but gives Joe some more chances to catch a pancake flip on camera. 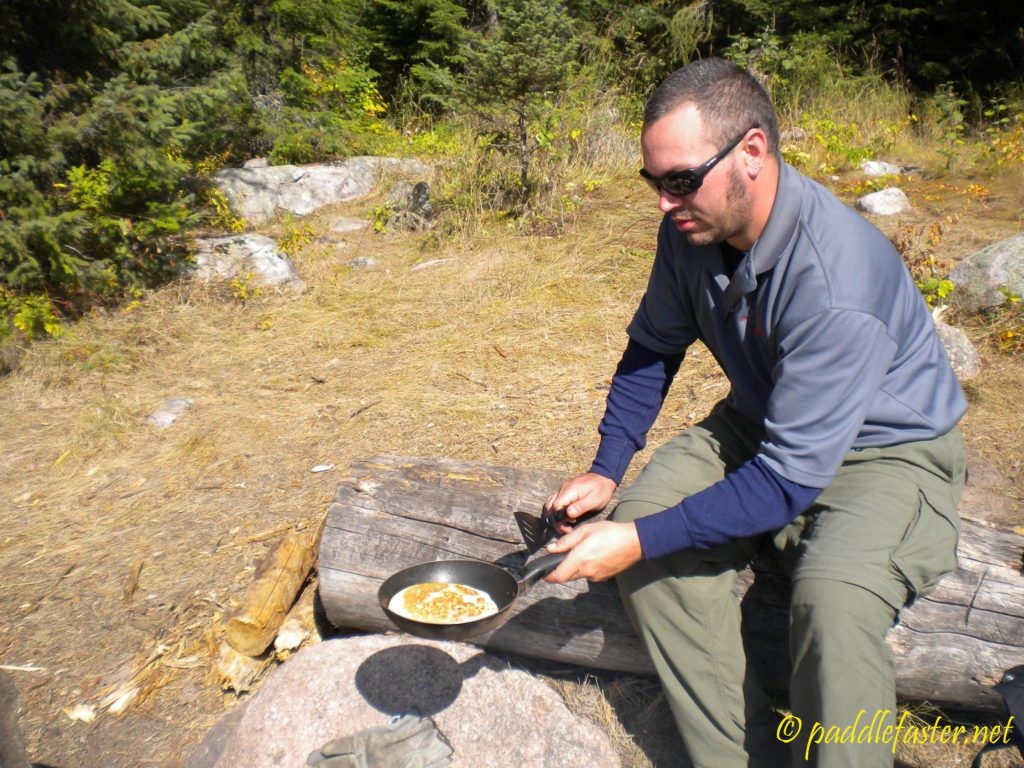 Once we’re done eating and camp is cleaned up we head out. The boat moves swiftly and effortlessly across the lake as we head to the Fairy portage. A group passes us headed the opposite direction, but too far away to exchange anything other than a wave. They seem to be headed for our campsite, maybe it’s one of several possible destinations for them?

We portage quickly over to Fairy and get our lines wet as we aimlessly meander around the lake. Neither of us catch anything although Joe later tells me he thinks he had some nibbles. I’m trolling a Mepps and Joe’s casting & retrieving a leech on a jig. Since we’re not finding anything we decide to head over to the ‘hotspot’ I saw noted online on Boot. We spend a little time inside the SW bay of Fairy looking for signs of the portage, but nothing really sticks out. At one point we notice two canoes headed south on Fairy and they’re headed for the next bay over to the East. We were looking in the wrong place! We quickly follow suit and a short time later we’re at the portage to Boot. We stop and chat with one of the groups we saw on the water, turns out they’re MN DNR. One of the guys quickly assures us he’s not going to check our licenses or harass us, they’re in the Wilderness collecting moss and other samples as he’s a botanist. He tells us they spent the last few days on Jackfish in the Tick Lake PMA. In hindsight I wish I had asked if they went West through the PMA and hooked up with Niki, or if they paddled through Crooked. Either way, I’m a bit in awe merely because they spent time in the PMA. Today would have been a good day for paddling the bays of Crooked – it’s sunny, low 50’s, and winds are a gentle breeze from the West.

I portage the boat and Joe talks with them a little more. Once Joe catches up to me we put in to Boot and immediately start looking for the fish. There’s lots of lily pads in the area around the hotspot. After losing the Rattling Rap to them I switch over first to a leech on a bobber then just straight bottom bouncing leeches on an orange jig head. Joe reports he thinks he’s feeling nibbles and I tell him I feel the same thing. I hook up with something that may have been a fish under the pads but after a little bit the line goes slack and all I reel in are some weeds. The wind’s blowing us a little away from the lily pads and I finally figure out, at least in my mind, the right way to jig. A couple minutes later I hook up with a fish! It’s a little bass but we’re just elated to have found something hungry. I let it go, and keep looking for something eater sized. After a bit we’re rewarded with a small, but keepable sized ‘eye. It goes on the stringer and we keep looking. Turns out we’ve apparently run out of luck and eyeing the sun and shadows getting longer we head back for camp. We have to stop to get some firewood too, along the way as the site had a small pile when we got there but it was largely depleted after yesterday. On Gun, Joe hops out and walks the shoreline a bit and tosses in a bunch of downed birch he finds.

We head back to camp with our bounty just as the sun starts to touch the trees to our West. I make short work of the firewood using the bashing log in camp and before long we have a fire going. Joe gets to work on some coffee while I fillet the fish, and he makes a startling discovery – we’re out of coffee! Noooooo! To take his mind off the coffee, Joe decides to make one last effort to add to our dinner from shore.

Knowing this is our last night makes the fact we’re out of coffee somewhat easier to take. I finish the fillets and get them breaded, then head out by myself in the canoe towards the opposite shore to ditch the carcass. The Spirit is fun to paddle by myself although I know I’m not doing it right – I’m just sitting in the stern and the front half of the boat is completely out of the water. It’s a beautiful night and a pretty sunset and I’m simply happy to be out to appreciate it. My task done I head back to camp and discover Joe’s been having to constantly nurse the fire to keep it going. Before I get out of the boat, though Joe gets a picture of me –

There are lots of hot embers but we can’t keep a flame going. Surprisingly, even though the wood we collected was near shore but not in the water a lot of it is damp. We alternate stirring the coals and blowing to coax out a flame.

We get the oil in the pan and heat it up. Once Joe declares the oil is ready we start dropping in the breaded pieces. 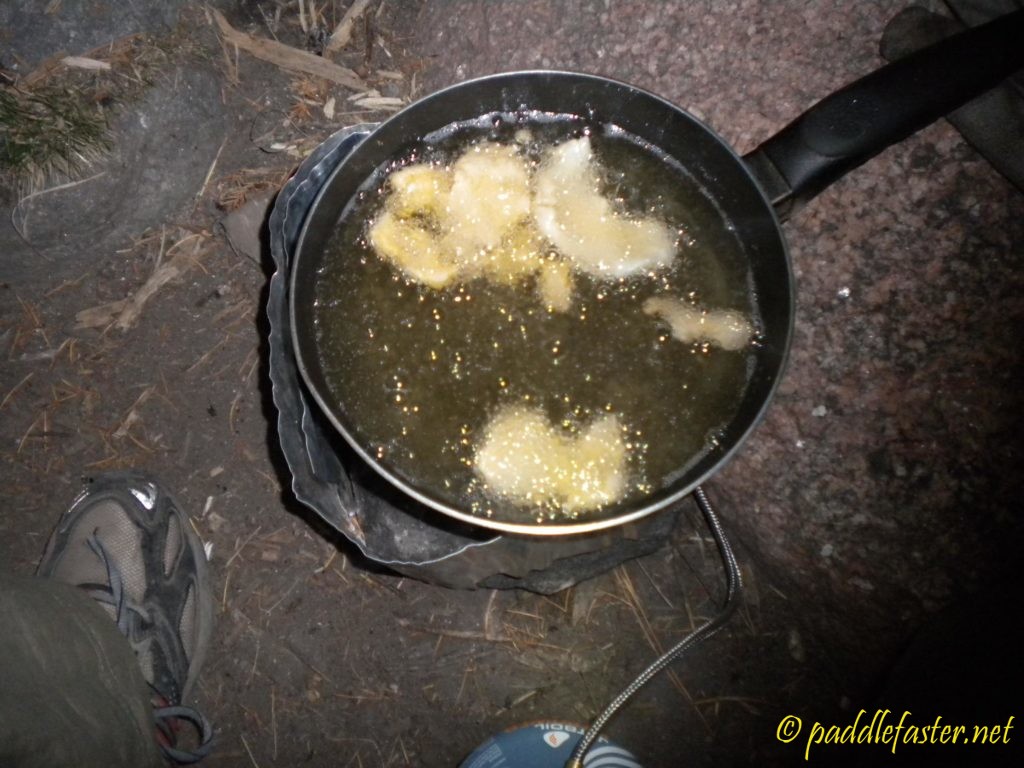 Ohhh man, it’s so delicious! We wish we could have been able to do this on our 2nd night and not our last, but at least we got our fish dinner.

Once dinner’s done the leftover oil helps to keep our fire going for the rest of the night. We had planned on filtering and reusing the oil throughout the trip, but since this was the last night and our only fry we decide to burn it instead. At least this way I can take the leftover oil home and use it for something else.

Dishes get washed, rinsed, and dried. At some point Joe discovers we have a resident mouse, so that prompts a quick straightening up of our stuff and getting our trash bag on top of the bucket so the mouse can’t get to it. The moon is a late riser tonight and we enjoy seeing the band of the Milky Way for certain the first time of the trip.

We douse the fire and head to the tent where we discuss tomorrow’s travel plan, how long it’ll take to get back to the car, and what time we’ll eventually get home. I figure with a South wind in our face and 10 miles to go it’s going to take a little less than 6 hours given our rate of travel on previous days. We decide on trying to get out around 8, with our absolute worst case departure of 9. I have a hard time writing in my trip journal as I’m simply exhausted from the trip and several times nearly drift off mid sentence. In the end I get it done and we drift off to sleep after midnight, but not before a noisy flock of ducks or geese pass by. I swear it sounds as if they flew right over the tent just a couple feet above it.