Slept pretty well last night. Our mummy bags are doing a fine job of keeping us warm. There’s a frost advisory on for tonight, lows are supposed to be in the low 30s. Tomorrow night is supposed to be even colder. Forecast for tomorrow isn’t really all that great for paddling…. Winds again from the North around 15mph. Neither of us really want to travel but it’s looking like if we really want to be out on Friday then that’s what we have to do.

Broke out the cold weather gear today. Wearing my long john bottoms as an extra layer on my legs. I love how fast zip offs dry, but they don’t really retain heat all that well.

We tried our hand at fishing off and on today. In the morning we paddled out of our bay and headed towards a campsite by the narrows. We tried all over the place and at one point Joe had a fish on! But….. it threw the lure and got away. While exploring the campsite I found some bear scat near the latrine –

Apparently the bear knew this was the place to do it! I also found some mouse chewed boxers near a tree. It went into our growing trash bags. We decided to head back towards camp and along the way tried to stop at a little island to fish from shore there. Its too windy for us to land safely on this little spit so we turned towards camp and let the wind do most of the work. As we passed by our campsite we got another shot of the firegrate area to try to show how windy it is out… 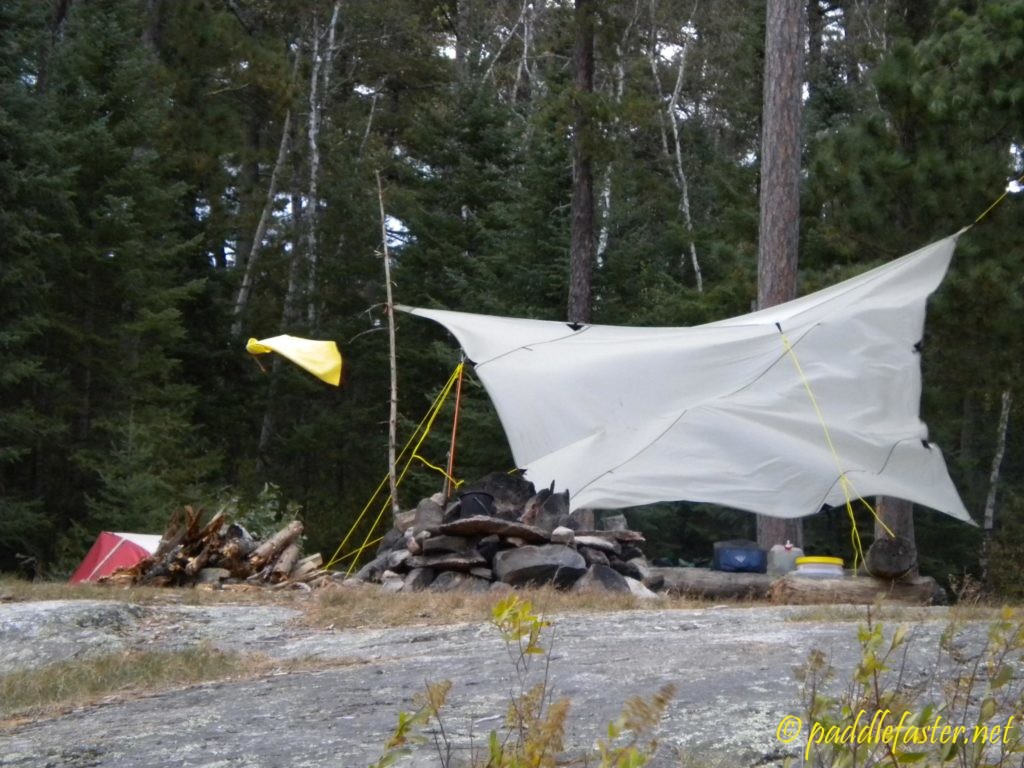 We walked up and down the shore from our campsite hoping to get some fish. All we came up with was an empty and pierced spray paint can, an empty can of Copenhagen, and Joe caught a very slender yet heavy branch –

I ended up catching two little baby bass from the dropoff by camp on leeches, after a quick photo they were promptly returned to their home.

The weather’s been rolling in today. It has been alternating between sunny and cloudy/rainy. We have an interesting vantage point on the weather from this campsite as we can usually see the rain at the end of the bay a few minutes before it reaches us. Some pretty dark clouds coming from the North.
Here’s what we saw from the North, West, and South: 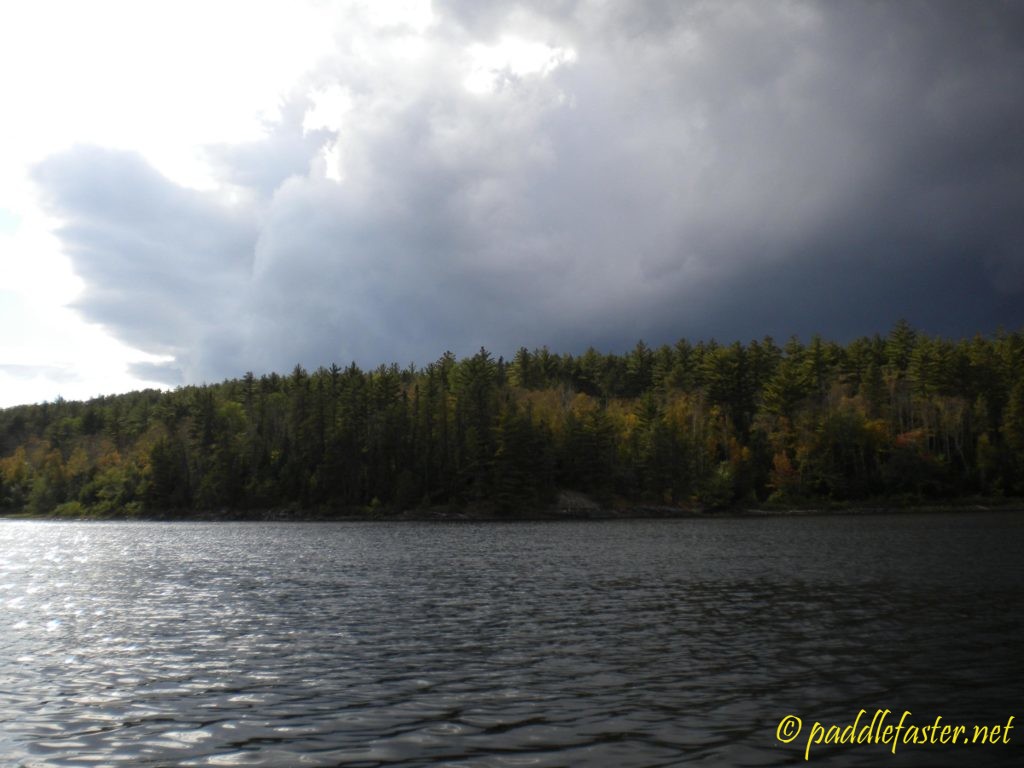 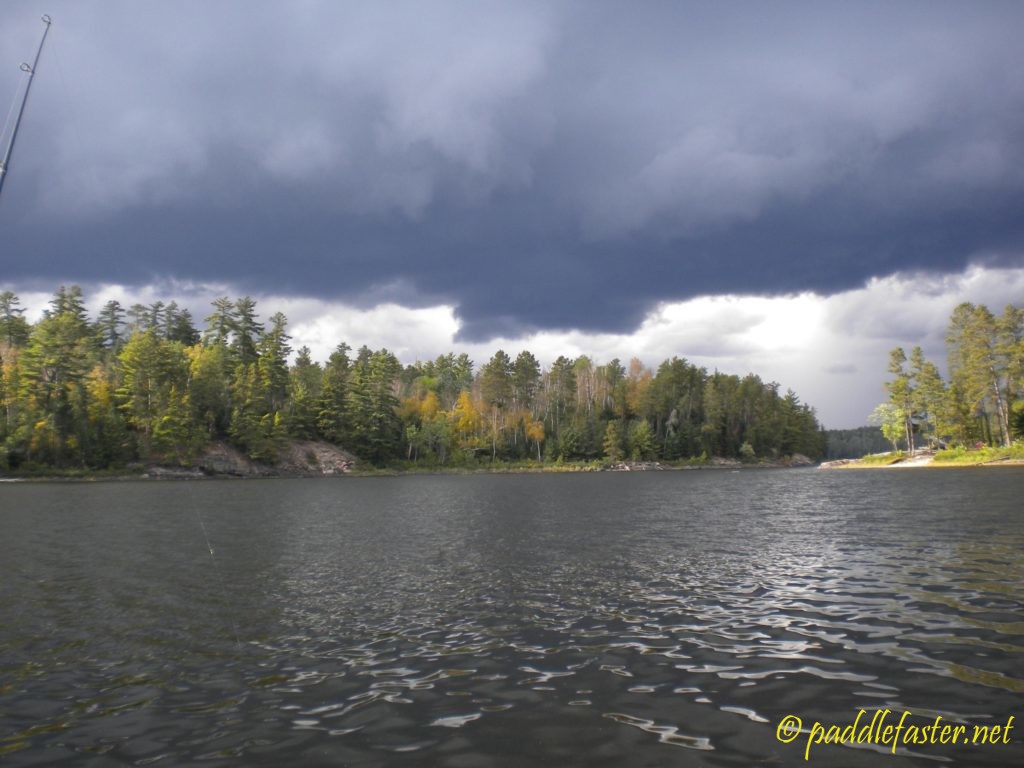 Before long the rain starts to fall in earnest, and so we secure things around the firegrate and under the tarp then head into the tent to get dry and away from the elements. 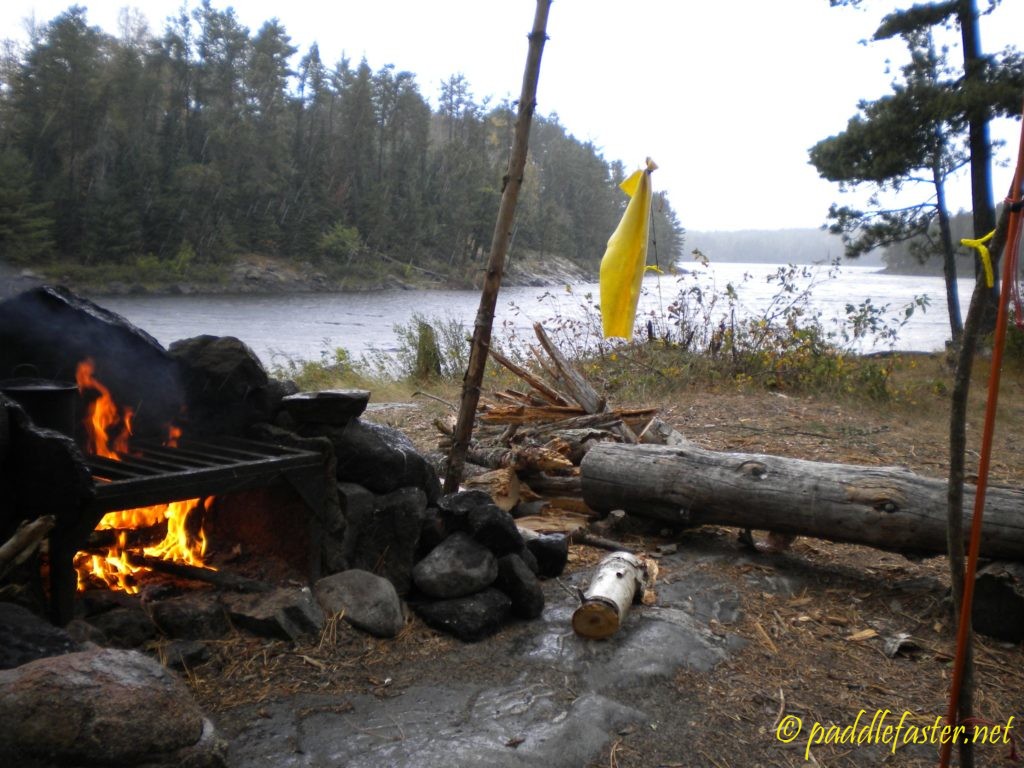 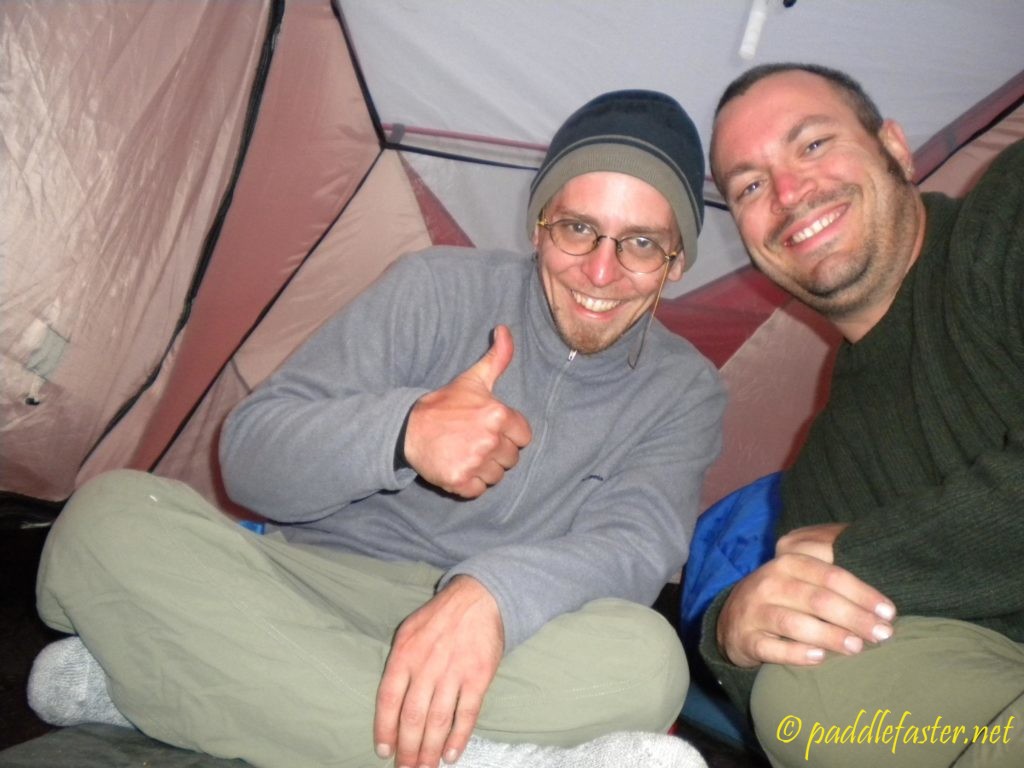 After the rain stops & before we make dinner, Joe mixes up a couple apple bannocks for us to have for breakfast tomorrow. He made a bunch of mixes at home and all we had to do was rehydrate the apples a little and add to the batter. They cook like pancakes on the stove and come out perfect.

Dinner tonight is fairly simple and easy to clean – we make up some ramen. I love oriental and always eat it as a soup. Joe prefers it less like a soup and more like flavored noodles…. but he discovers soon that after the fact he’d rather have soup. The beef flavoring is strong for his tastes and if he’d kept in the water it would have been less overwhelming. In the end he gets almost all of it down and dumps the couple forkfuls left into my soup.

After dinner is done we set about taking down the tarp. The forecast no longer calls for the chance of rain tonight and its one less thing to have to pack up in the morning.

Somewhat of an early night again. If we’re traveling tomorrow then we need to be up early. Alarm’s set for a little after 6.