7:30AM –
We’re tearing down camp and getting ready to travel. Weather radio says winds from the NW 10-15. We’re trying to get past Friday Bay, maybe as far as Gun. It’s cold out this morning, low 30s. 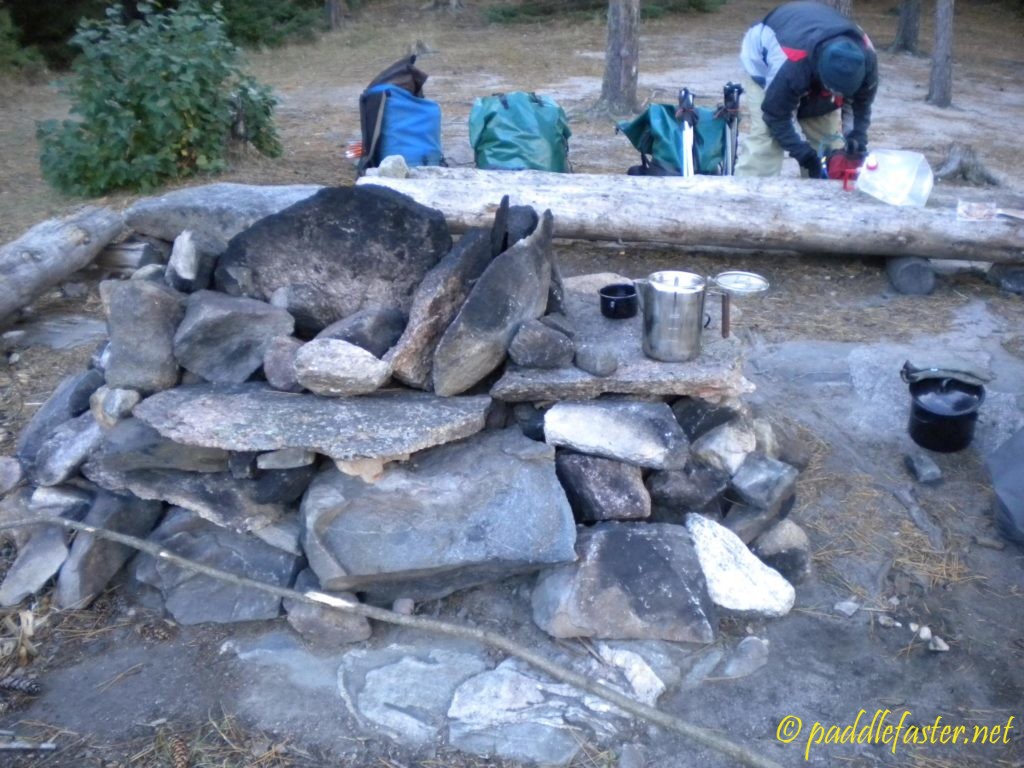 Shortly after leaving camp while in the calm part of the narrows before it opens up to Thursday Bay we saw and spoke with a husband/wife tandem. They were doing a Quetico trip but decided to turn around. No idea where or why they turned around, but if it was because they were trying to go North into Thursday then I don’t blame them. The wind was in our faces for much of the morning. Paddling across Thursday Bay was very difficult. We encountered solid white caps and rollers in the deep and wide parts of the bay, and we had to go further North than we would have so we’d be able to turn with the wind to get to Friday Bay. In the end we had a good strategy and Joe and I make a good team.

Took a breather and talked strategy for a minute or two between Thursday and Friday Bays before heading back out into it. We made somewhat of a beeline for an island in the middle of Friday hoping the lee side would be protected and have a decent enough landing for us to be able to get out for a little while and eat a snack. Paddling in Friday isn’t quite as treacherous as Thursday but it still isn’t a walk in the park. We make it to the island and it has a shelf on the Southern side that makes a good landing with no wind for our break. 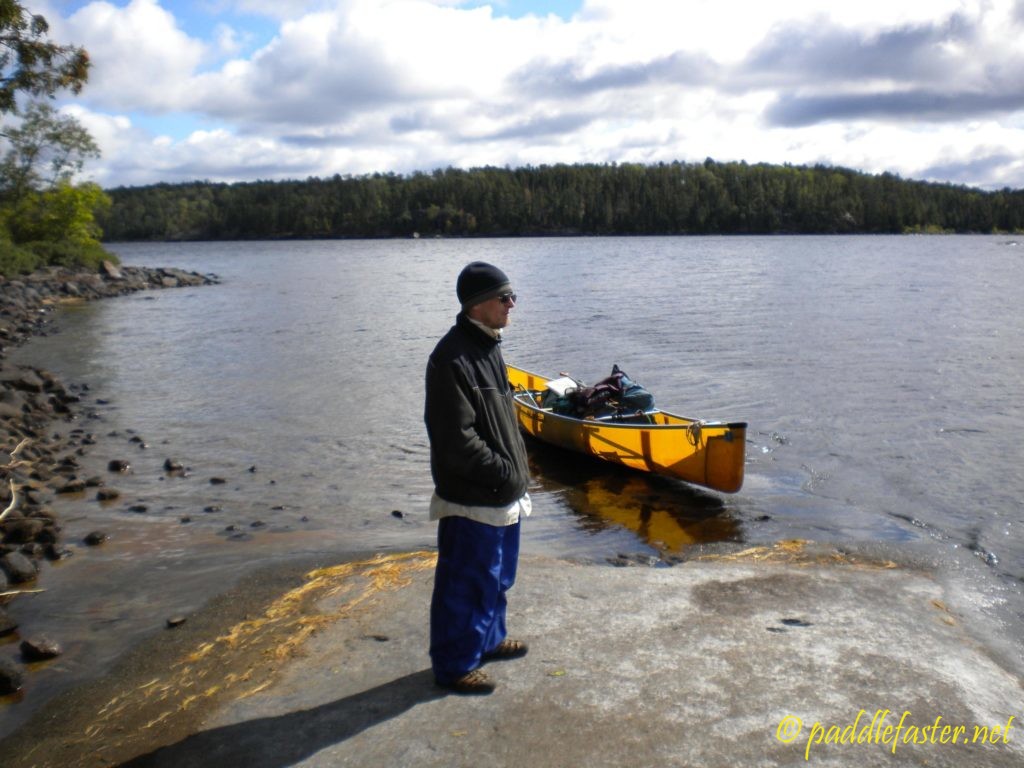 After our break we find the portage to Papoose Creek easily enough and we stop to bid farewell to the Canadian shore.

A little while later we’re on Papoose Creek and enjoying the relative peace of the bog area compared to the wind and waves of Crooked. 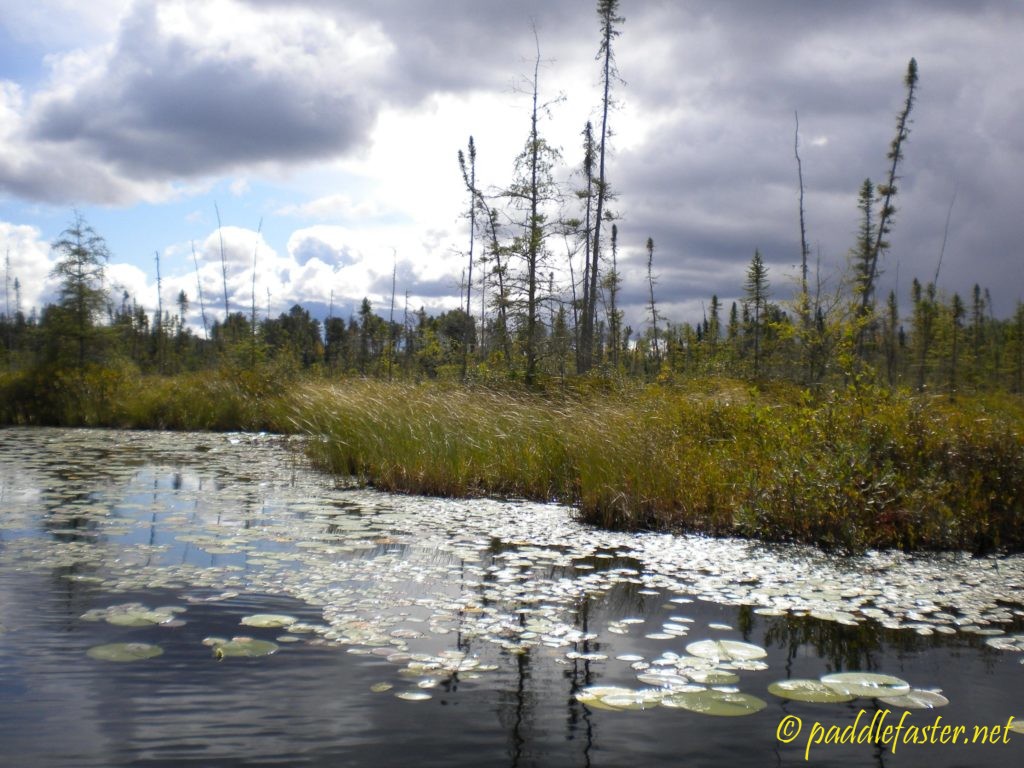 The travel through Papoose to Niki, Chippewa, and Wagosh is relatively uneventful. We spot most of the campsites and I note that they’re all empty. Clouds start rolling in while we’re headed South and before long a light rain starts to fall on us. The rain slacks off then starts anew with what I first think are heavy drops, but then notice the ‘drops’ are sticking to my sweater. Sleet? Hail?! We both burst out laughing, giddy with the strangeness of it all. 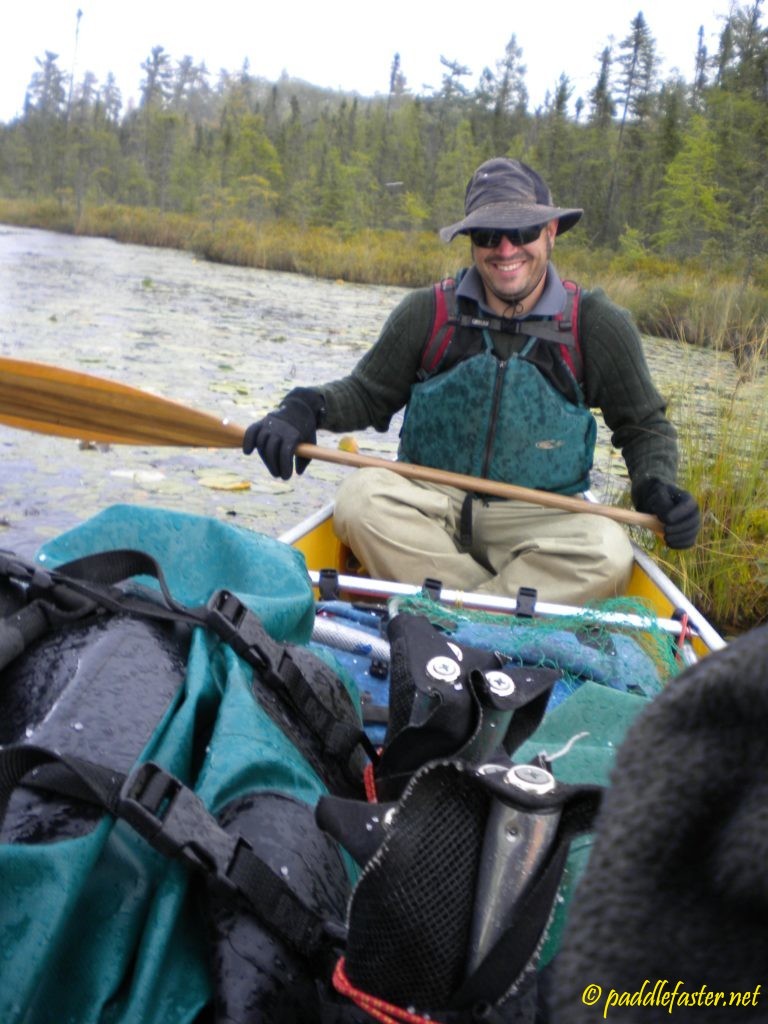 We get to the portage from Chippewa to Wagosh as the sleet/hail comes and goes. By now there’s a nice layer on top of us, our packs, and in the bottom of the canoe. Joe portages the boat and despite his best efforts he can’t bounce out the layer of sleet that’s accumulated on the bottom of the boat. The portage trail is a little wet and by the time we get to the other side it’s covered in a layer of sleet. 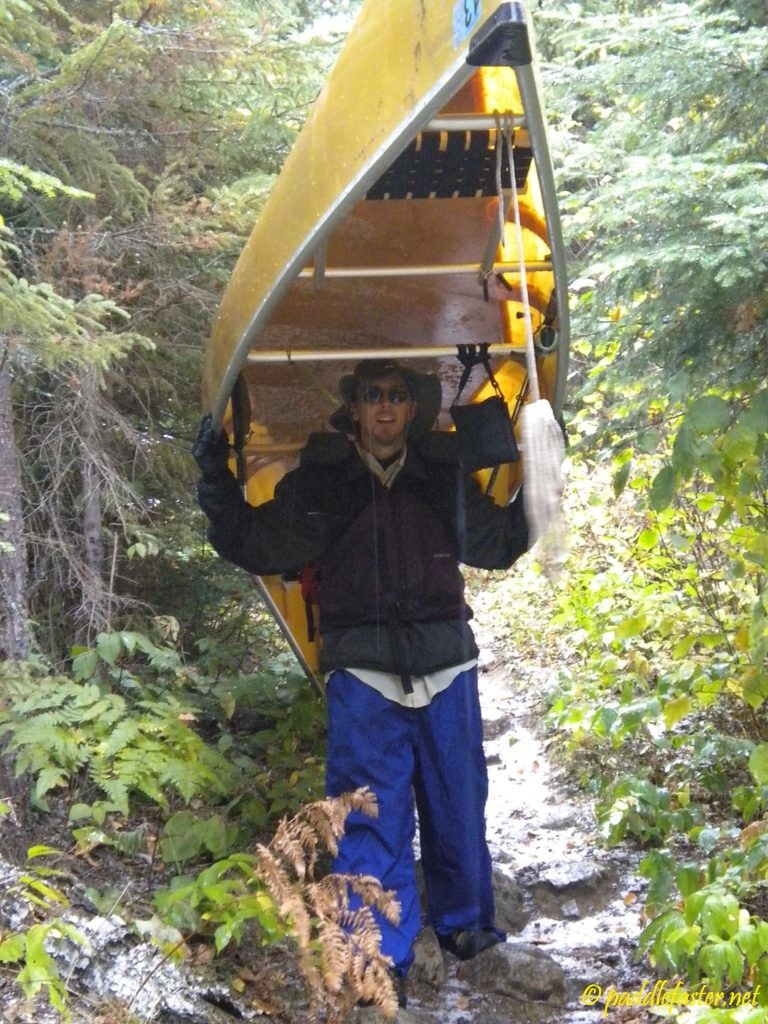 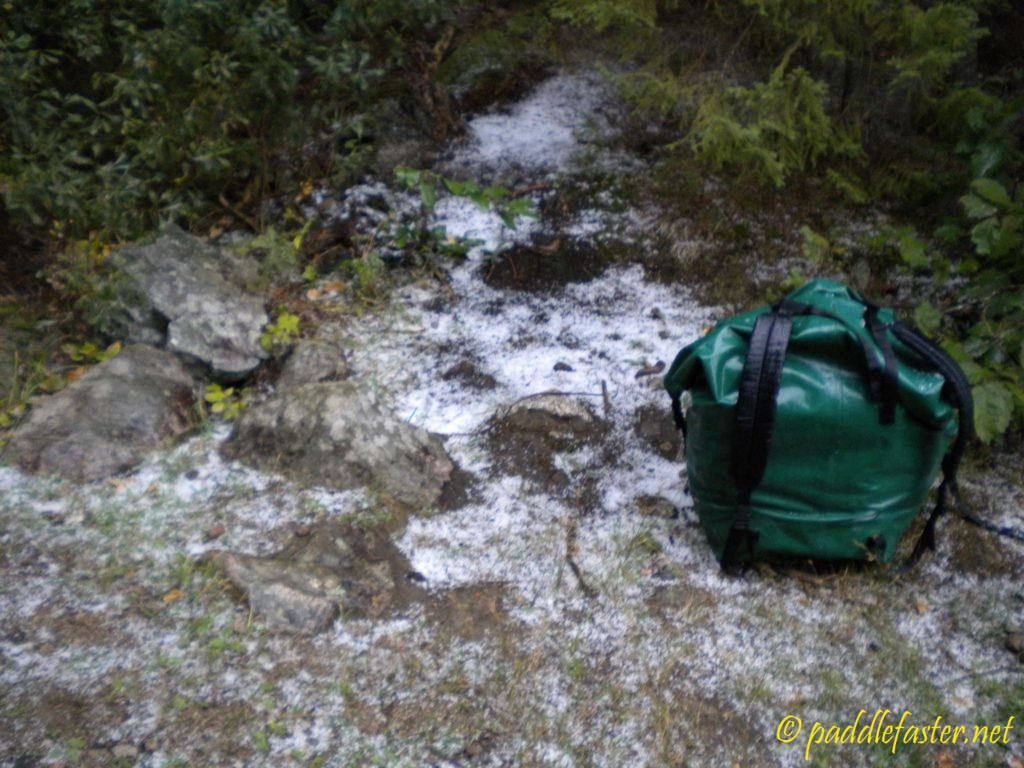 As we paddle across Wagosh the sleet/hail and rain continues to turn on and off. We’re at the 320 rod portage to Gun. Joe takes the food pack while I take the canoe. We both swear that we read that the portage is relatively flat and not that difficult of a walk. Turns out there’s quite an elevation change – you gain about 100 feet before descending 40 feet to Gun. Maybe it’s an easier carry the other direction.… Either way, I had to take a couple short breaks along the way. At one spot I stop there is a topless tree which is the perfect height for me to rest the bow on and get out from under the canoe for a minute. Joe keeps walking, so I put the canoe back on my shoulders and finish the portage.
After a couple minutes to catch our breath we head back to get our second load. I leave my gloves behind on my seat and Joe leaves his hat, a decision I think both of us regret before too long. The rain and sleet starts back up as we get to our stuff and Joe’s head is pretty drenched. I don’t miss my gloves too much as my hands and feet tolerate cold pretty well, but little did I think that they’d be absorbing all the rainwater. About halfway through the portage the sleet gets replaced by wet snow and we have another, but shorter breakout of giggles at the sight of it.

It takes us about 20 minutes per leg to do the portage, and just about an hour after we started we’re pushing off into Gun. There’s fog swirling around on the lake, and it makes for a pretty scene. The wind catches some of the fog and creates little dust devils with the mist. 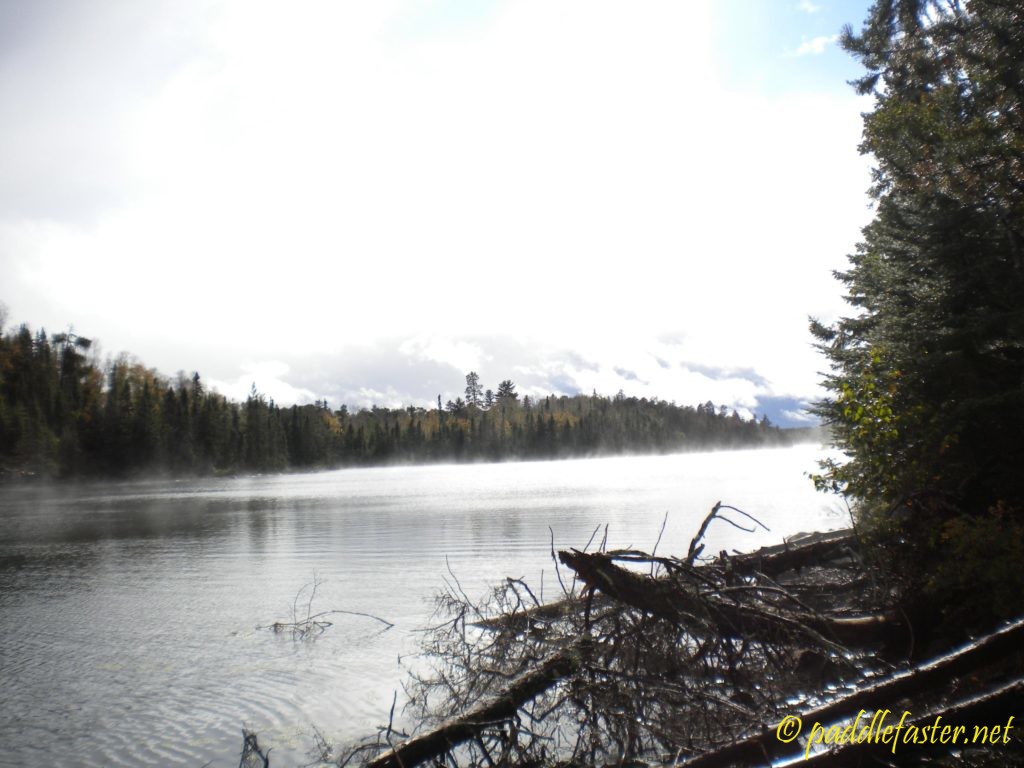 The portage has taken a lot out of us. Similarly to how I could tell when paddling in to our campsite at Thursday Bay that we were ready to be done for the day, I can tell again that Gun will be the lake we camp on provided there’s a site.

As we paddle down the barrel and past the trigger we start to see campsites and can tell they’re occupied. We continue on…. There’s a 4 star on the Northern shore of the handle area that I’m hoping for, somehow we miss the middle campsite before our target so we’re unable to tell if it’s occupied. We pull up to the 4 star and sure enough it’s open! Joe take a quick look at it from the boat and says, ‘No, this isn’t it.’ Meaning he doesn’t like the looks of it and wants to continue. OK – there’s a site directly across from us we can see from here. Looks unoccupied. We paddle over, not noticing at first the wind is helping to push us toward it. There’s lots of chop and small waves breaking on the shore of the campsite as we get out to look around. The fire grate’s backside is to the wind, and it’s pretty darn breezy here. We look at each other and agree – this is definitely not it!

Decision time. We know we’re laying over tomorrow, but the shadows are already getting long and we have no idea the status of campsites on the lakes further South. We decide to paddle back to the 4 star through the headwind.

Exhausted, we park the boat, get out, and drag our stuff up onto shore. The site looks decent enough although there really aren’t a lot of flat options for the tent and nothing by the fire area workable for flying the tarp. We listen to the forecast and decide not to bother with the tarp since there’s only a slight chance of rain tonight and nothing for the rest of our trip. We decide where to pitch the tent, and before too long we’re getting out of our wet travel clothes and into our camp stuff. Neither of us wants to float the boat again today to go out for water so we filter from shore again. The pump is getting hard to push again. I take a look at the filter and it doesn’t look too bad – and if I wait for a couple seconds between strokes the first stroke is always easier than subsequent ones. I don’t know, maybe a new filter or at least a replacement cartridge is in order before our next trip. Suddenly a gravity bag is appealing for once we’re at camp, but I know that I’ll still want to carry a pump so I can get water any time. 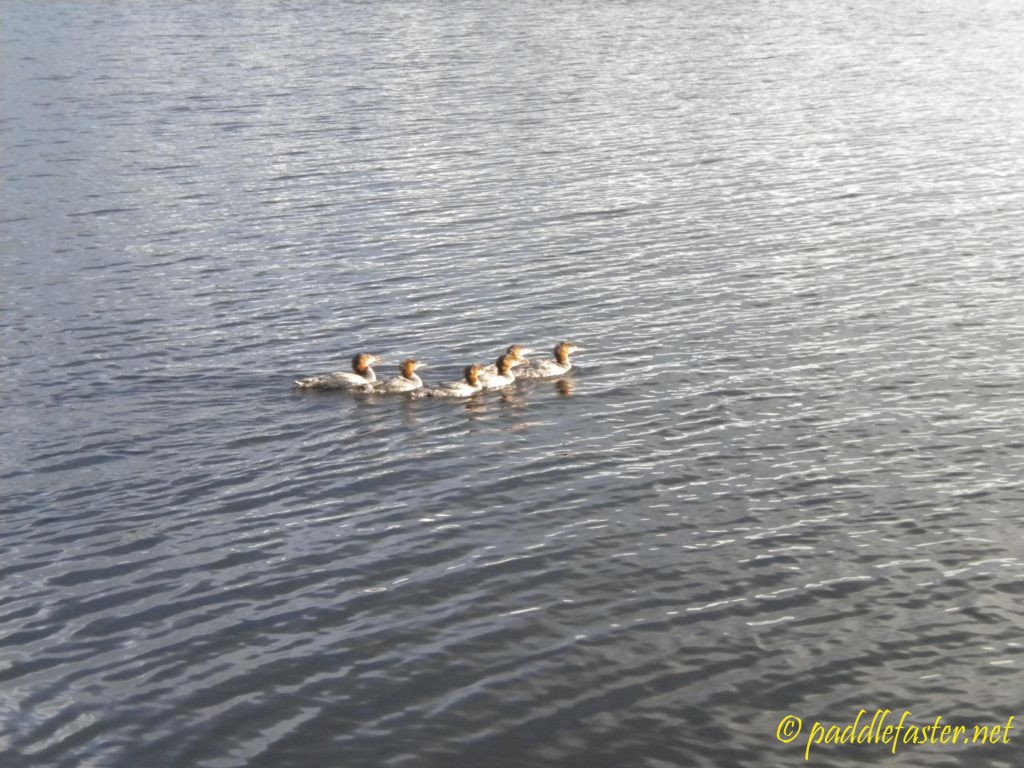 Joe gets dinner going while I refill all our water containers as well as the collapsible jug that we use around camp. Breakfast for dinner – we have the last carton of dehydrated hash browns and a pack of 15 pieces of bacon. Both have been awesome on this trip and I’m grateful to bwca.com and the recipe forum for cluing me in to the hash browns.

We sit quietly around the fire cursing the wind for directing the smoke onto us, as we carefully dry out our socks and my gloves. Stars are out tonight and we look at them for a bit before putting out the fire and turning in.

Tomorrow we’re going to explore Fairy and Boot as there’s supposed to be decent fishing around both, and we are determined to have fish for a meal before we leave. We will not get skunked, we’re on a mission to find fish!