Woke up around 7 today. Got the coffee going then noticed the fog that had settled in over the water during the night. I quietly fish while watching it burn off. Joe came out just as the coffee started to perc. Ken was out soon after.

We’re on the water around 10 today once breakfast is done and camp taken down. Finally, the wind is at our backs as we paddle out into the main body of the lake. We passed many other canoes, all were headed in. Lots of smiles, nods, and waves were exchanged as we passed them.

After about an hour we had reached American Point and started looking at sites. We were most interested in what looks like an island just to the West of the paddle only line.

This camp is awesome! Its on the protected side of the island with a sandy beach on either side of an almost land bridge connecting the island to the land. The firegrate area is open and spacious and there are lots of tall pines for putting up the tarp, hammock, and clothesline. There are at three, maybe four tent pads and all are in the shade.

We quickly unload the canoe except for the filter and container then head back out into the lake to get water. It turns out to be a good thing that we left camp this morning when we did. As we’re filling the water container we watch several canoes enter the bay the same way as we did, only this time to find the two best sites taken. A pair of ladies did briefly stop at the rocky site to discuss their campsite options then later left.

Once back at camp we unpacked and set up camp. 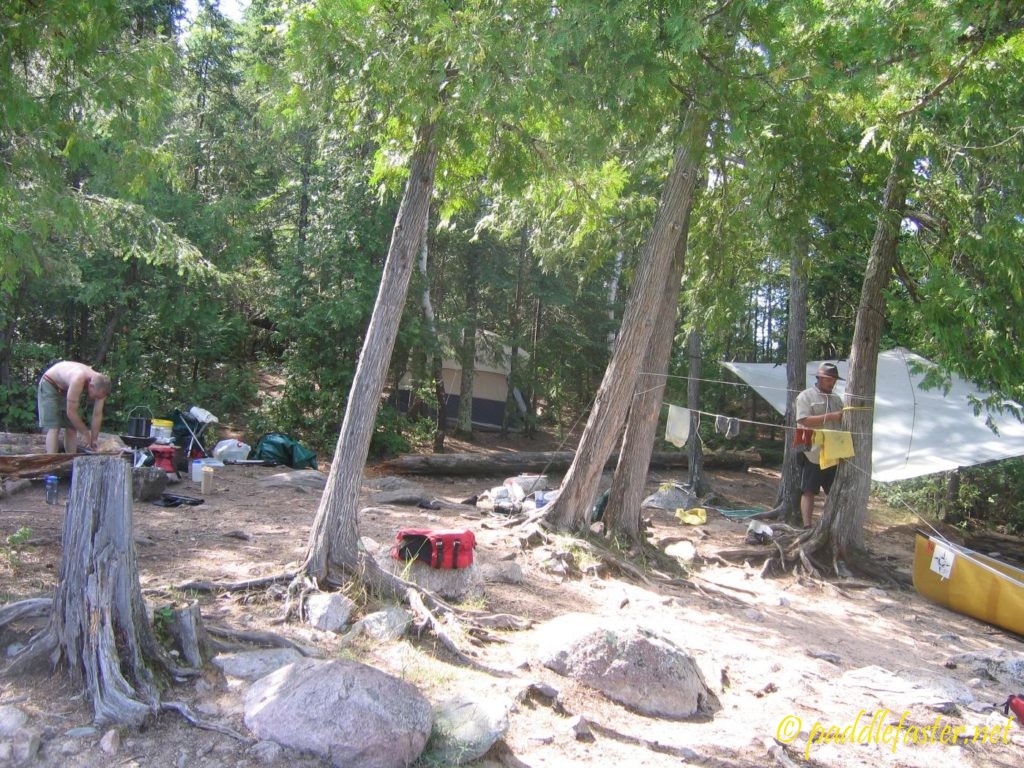 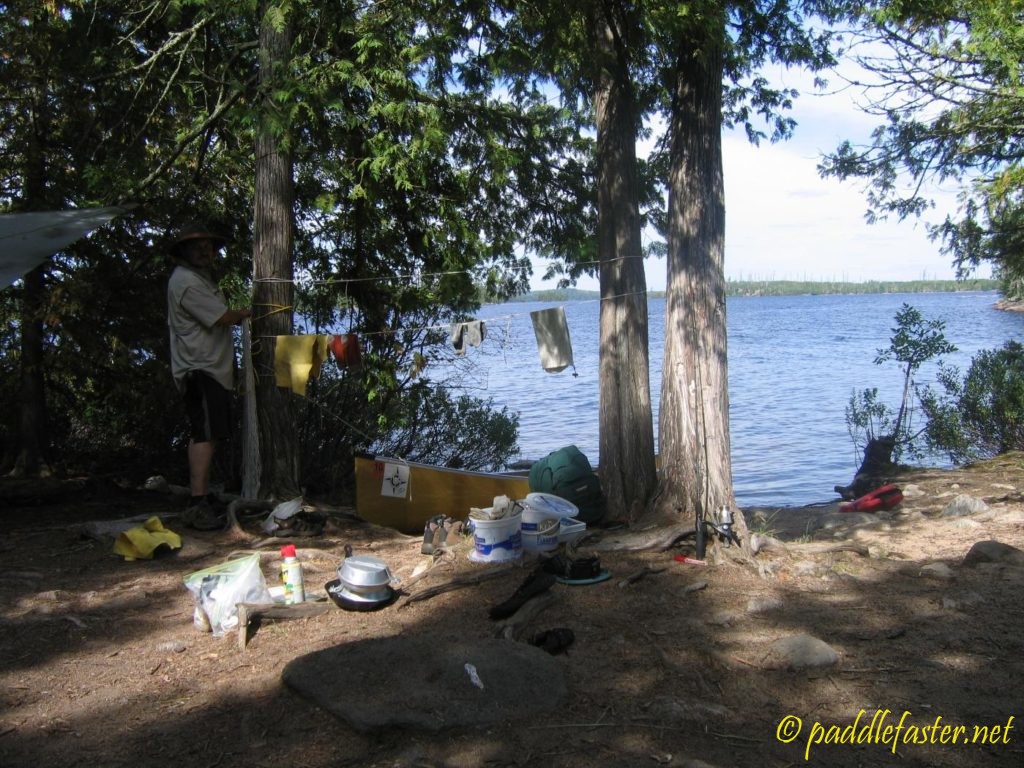 Once camp’s set up I take what I think is my first turn in the hammock. 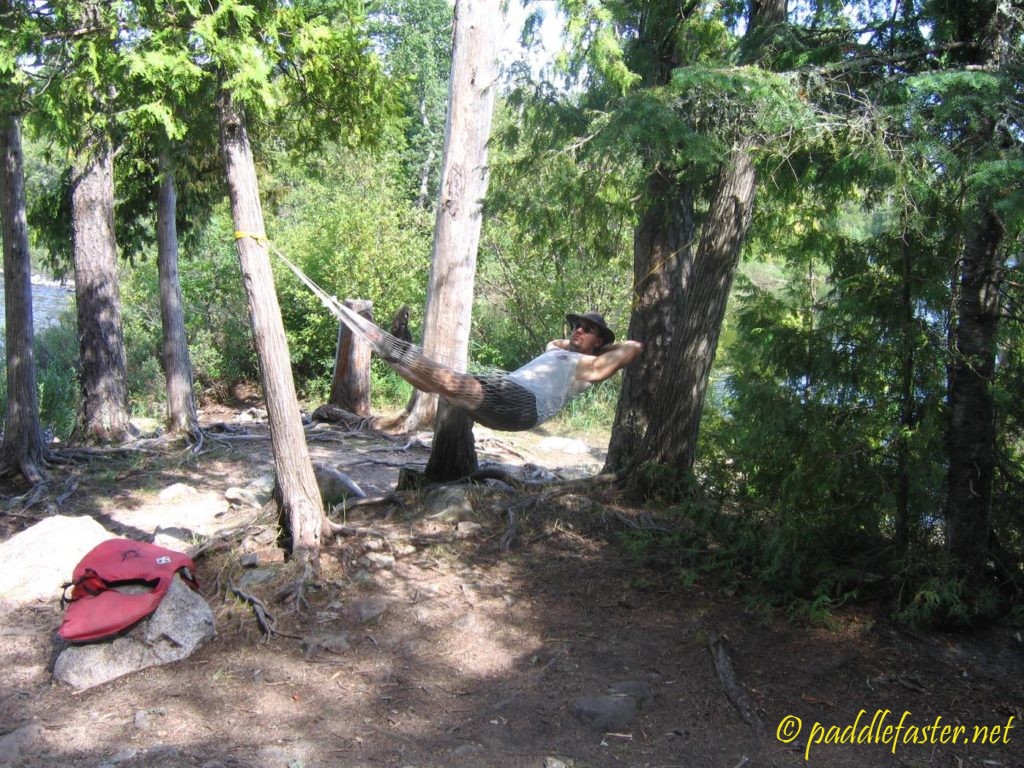 Spent the rest of the day lounging around camp, exploring the island, gathering firewood, and trying to do some fishing from shore. The North side of the island is exceptionally windy while 30 feet away in our site you barely hear the wind, let alone feel it.
We didn’t get a picture of it, but while we were fishing from shore Ken suddenly tells us to look in the bushes to the left. We watch and then a small, weasel-looking creature appears and casually heads towards us. It stops right in front of me and checks us out, then continues on its merry way. Not sure what kind of animal it was though… I know Pine Martens are supposed to be brown in color and this guy was jet black.

Around 8 we go back to the North shore to watch our last BWCAW sunset of the trip. Ken and Joe trade off taking pictures as the sun passes through the clouds then behind Quetico. 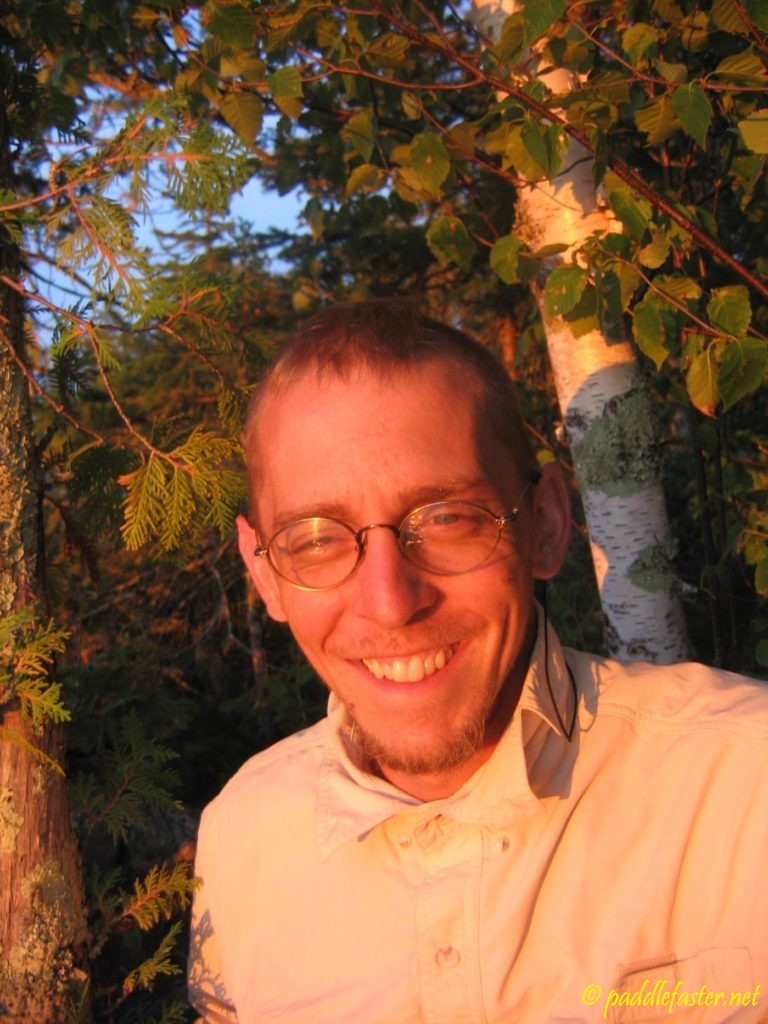 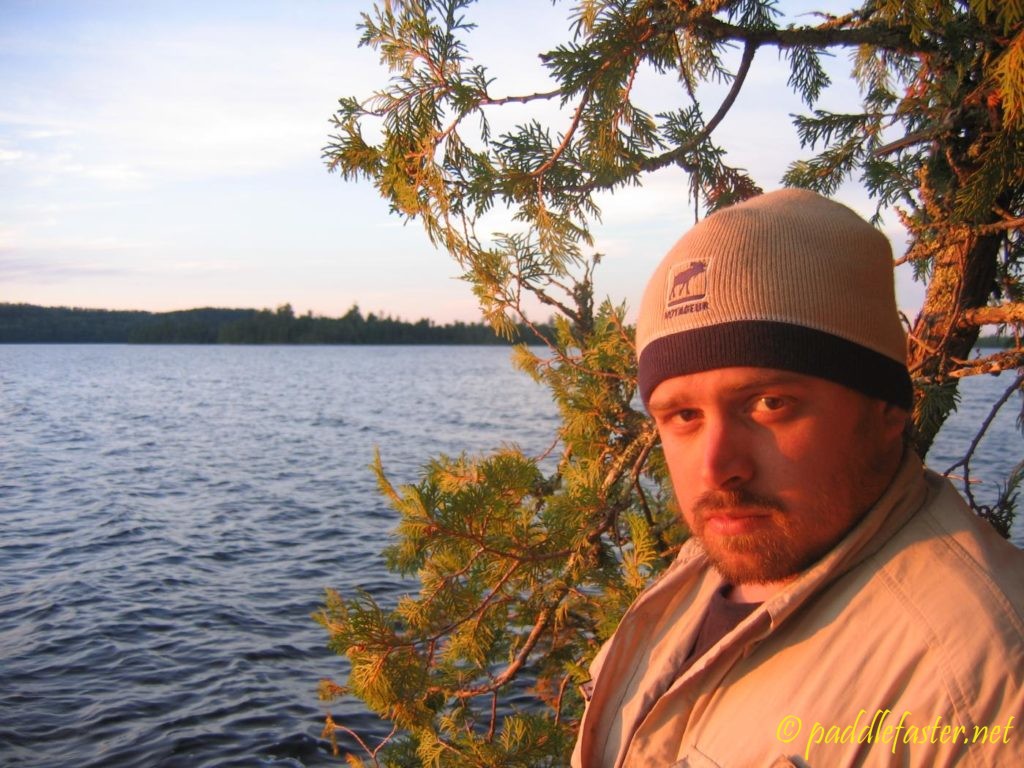 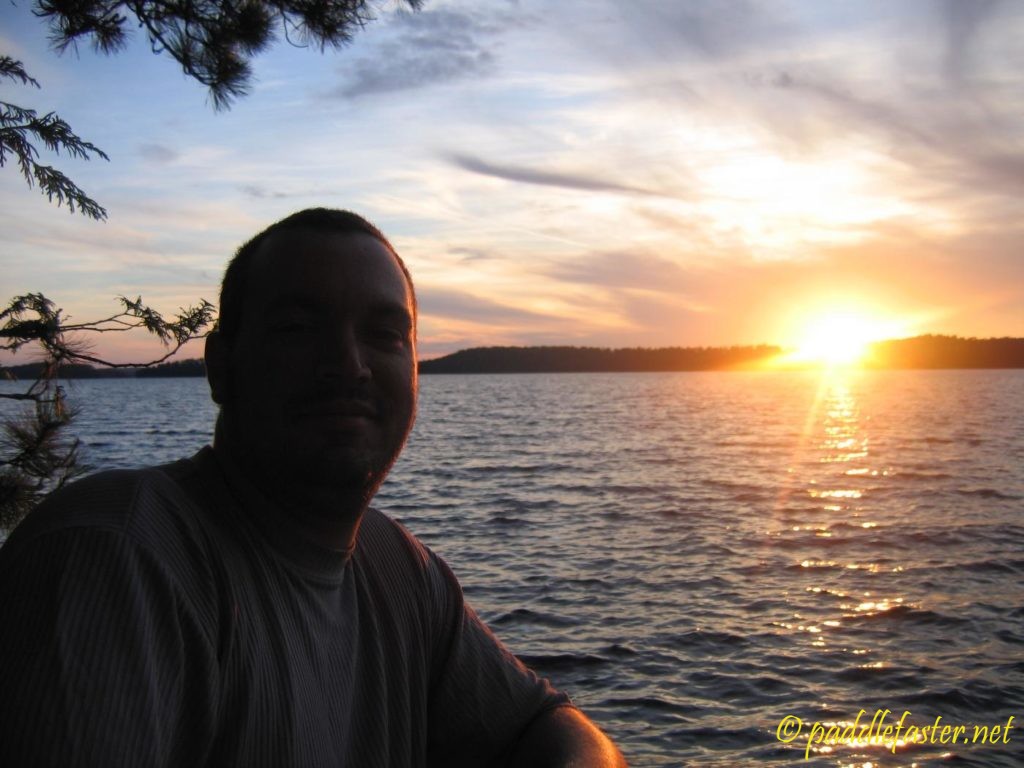 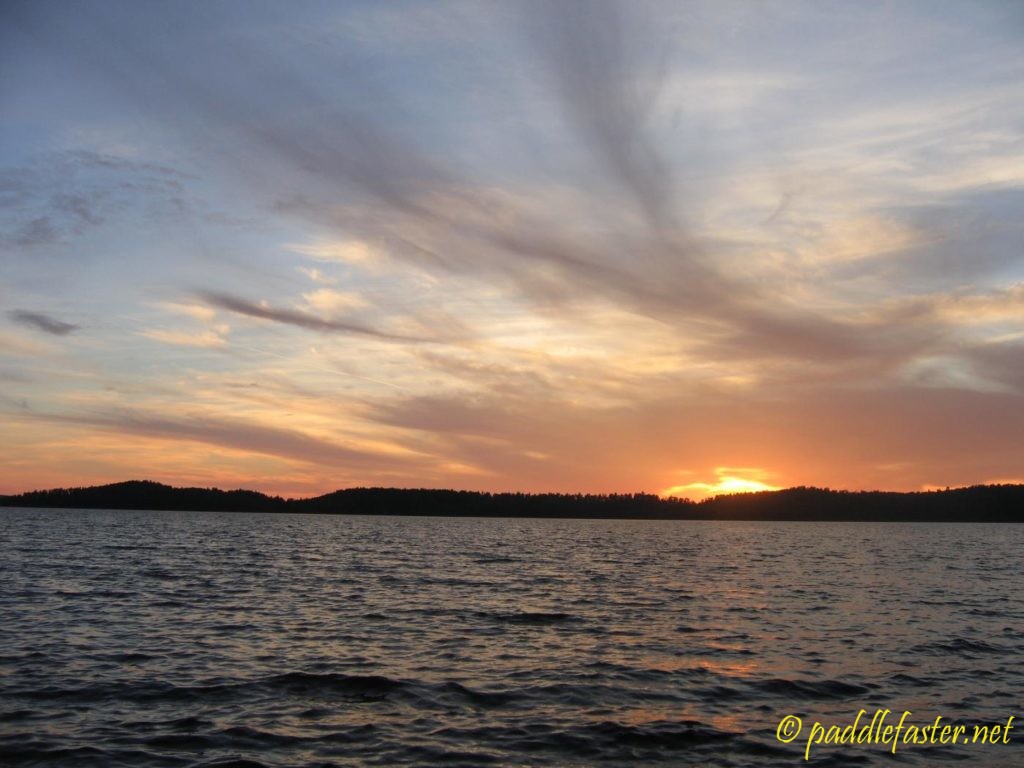 The cheese tortellini and ragu for dinner has been on everyone’s minds since we got to camp late this morning. Joe puts a pot on to boil while I casually cast and reel in a baby torpedo. Before long I’m getting missed strikes and concentrate on finding the right speed for the lure. Pretty soon I’m fighting a smallie! Now we have fish and pasta for dinner! Decide what the heck, I’ll cast a few more times before it gets too dark. Two casts later something big explodes on the lure and the fight is on. As I’m wrestling with it, Ken also gets something on the line but his fish manages to break free. A couple minutes later this guy came on shore: 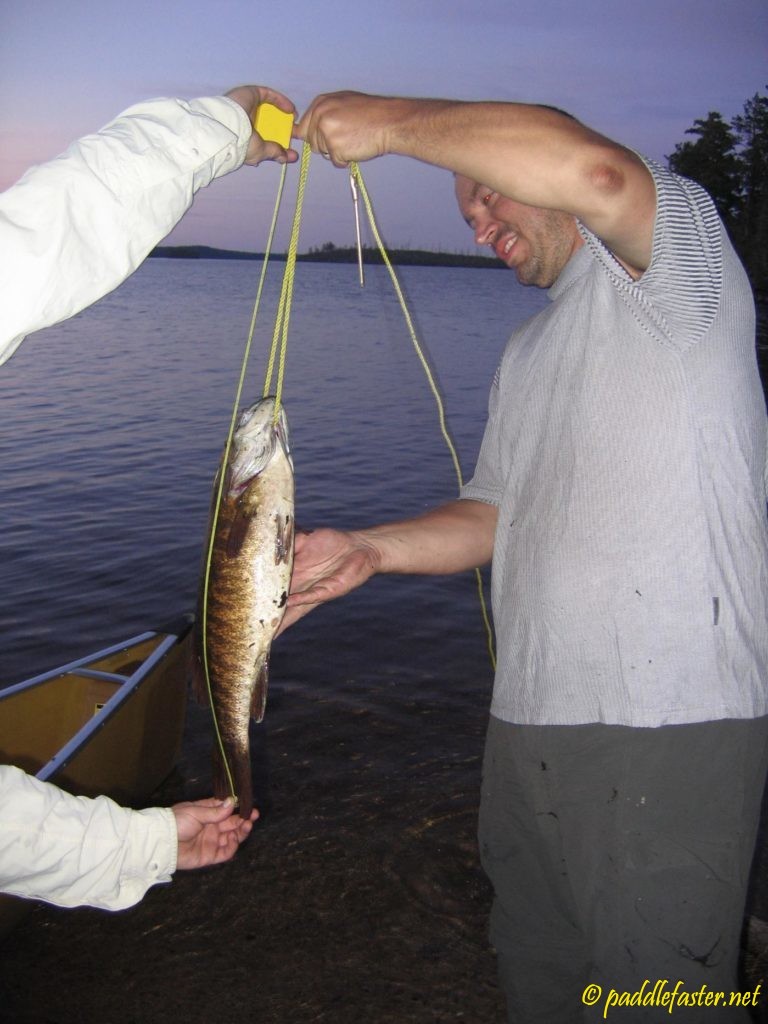 The biggest catch of the trip, it measured over 21″ and weighed close to 6 pounds. After a brief debate of do we let it go or do we eat it, we decided to keep the pasta for dinner tomorrow. =)

After dinner was done and dishes cleaned we relaxed by the campfire a bit then headed out for a quiet evening paddle in the bay. Joe pumped water while we all gazed at stars and listened to the noises of the area. 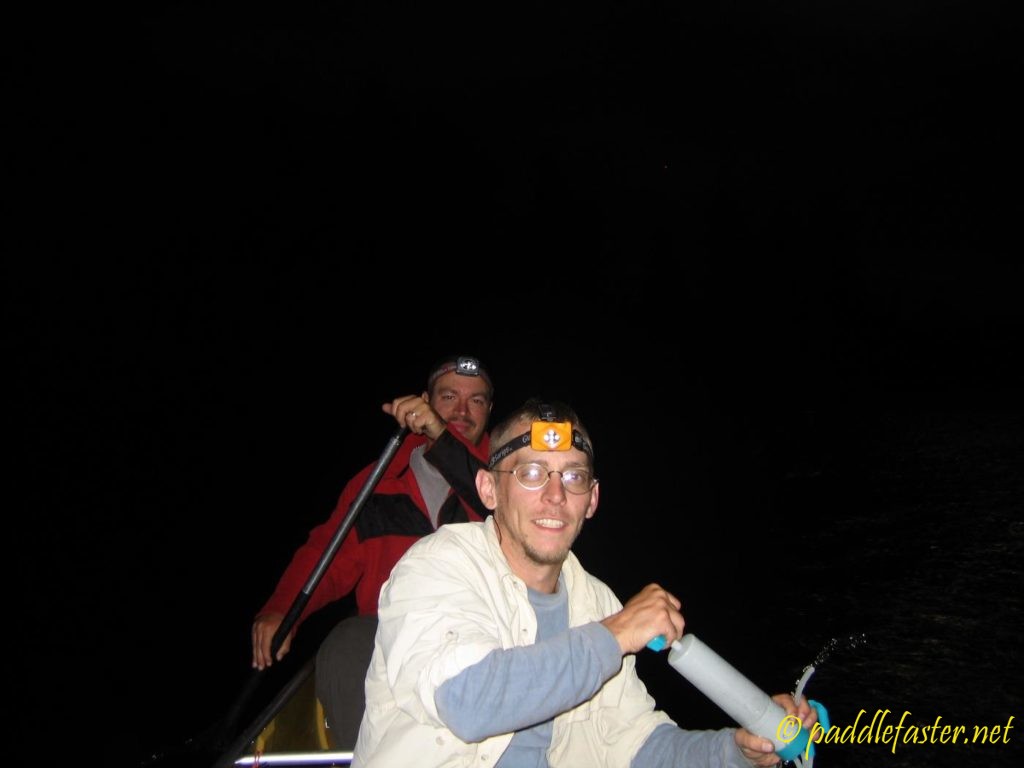 Stayed up late tonight trying to absorb as much as possible before exiting tomorrow.