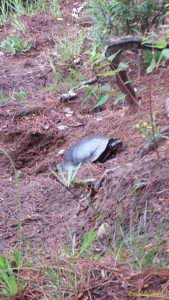 Brian and I are calling our campsite Turtle Island. Everywhere we look it seems like there’s a turtle either hiding in the grass on the edge of camp or digging a hole. A couple times now we’ve come up on mothers as they were laying their eggs. We tried to observe without disturbing her and none were so bothered by our presence that they did anything but keep laying.

Our day trip to Springstead Landing was successful. The pump was found and the water was as advertised – quite cold and delicious. While we were at the landing I managed to drop my pole into the lake right alongside the dock. This time though, Brian had his big treble hook along and we were able to get my rod back quickly. Thankfully too, the water at the landing was fairly clear.

We fished some on our way back and finally got chased off the water by some showers. Brian and I each manage to catch and then release a pike. We’re not concerned about catching fish for eating though, tonight has backwoods pizzas on the menu. Back in camp, while we’re building a good base of coals for baking the pizzas, Brian gets to finding a good board for use in making a bow and spindle.

Another board gets turned into the bearing block that the non-bow hand uses to keep the spindle in position. A flexible stick and paracord complete the setup. Brian tries it a little and while it gets very hot and chars a little, no ember gets produced….. Some fine tuning is necessary. Brian also fashions a support for the bow seat as we discover during this week that the port inwale right by the seat is detached from the hull and is sagging down by an inch or more. I knew that there was dry rot in that spot and was hoping that a re-rail could be avoided, however that does not look possible now given the need for propping up the seat. 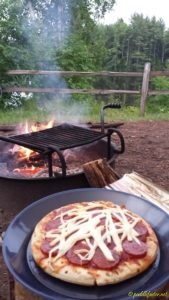 The pizza turns out perfectly. We spend the rest of the evening before the fire, chatting and sipping whiskey in lemonade. 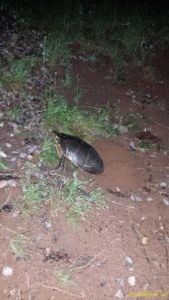