We’re up about 7:30 & shortly are out of the tent and getting a fire ready to cook breakfast. On the menu for today are pancakes, hash browns, and bacon. The fire grate is difficult to cook on, as it’s very low over the fire and hard to see where fresh sticks are really going. Breakfast takes a while to get done. As the dishes are being washed the boys go and try some more fishing. I’m off exploring a peninsula to the North when I hear Gavin call out to me that he’s got a fish on the line. By the time I get there the fish has not only thrown the lure, but Gavin also has the lure now stuck on a submerged branch. I get him to stop yanking on it & back off the fallen tree he’s walked out on, and Rick comes down to the shore so we can launch a canoe to go retrieve the lure. I tie lure back on and decide to fish some myself. Pretty soon, I’m snagged too! Toss the PFD back on, launch one of the Q17s that are the rentals, and paddle it solo to go retrieve my popper. When I get back to shore the boys have lost interest in fishing and go play on all the fallen logs around the campsite so I suggest we all get suited up to go for a swim.

I ask that everybody wear their sandals and PFDs when swimming. At first I think there was a little resistance, but when I explained that people can fish from wherever they like and there could be marauding hooks they put their shoes on. Same for the PFDs, but that too was quickly accepted when we got first hand knowledge that 15′ from shore the water was too deep for the adults to stand. High Lake measures about 90′ at its deepest point and we were mostly swimming over 50-70′ deep water. It was nice to relax and let the PFD do some work to keep me afloat. The boys had a great time splashing around with Stan, too! 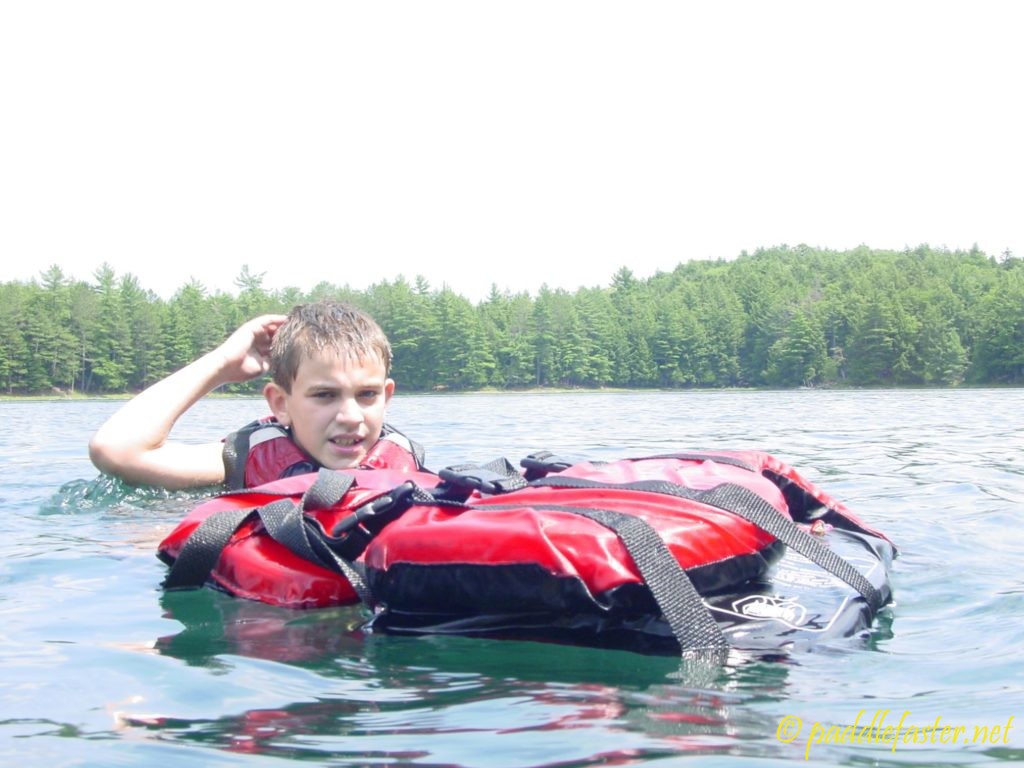 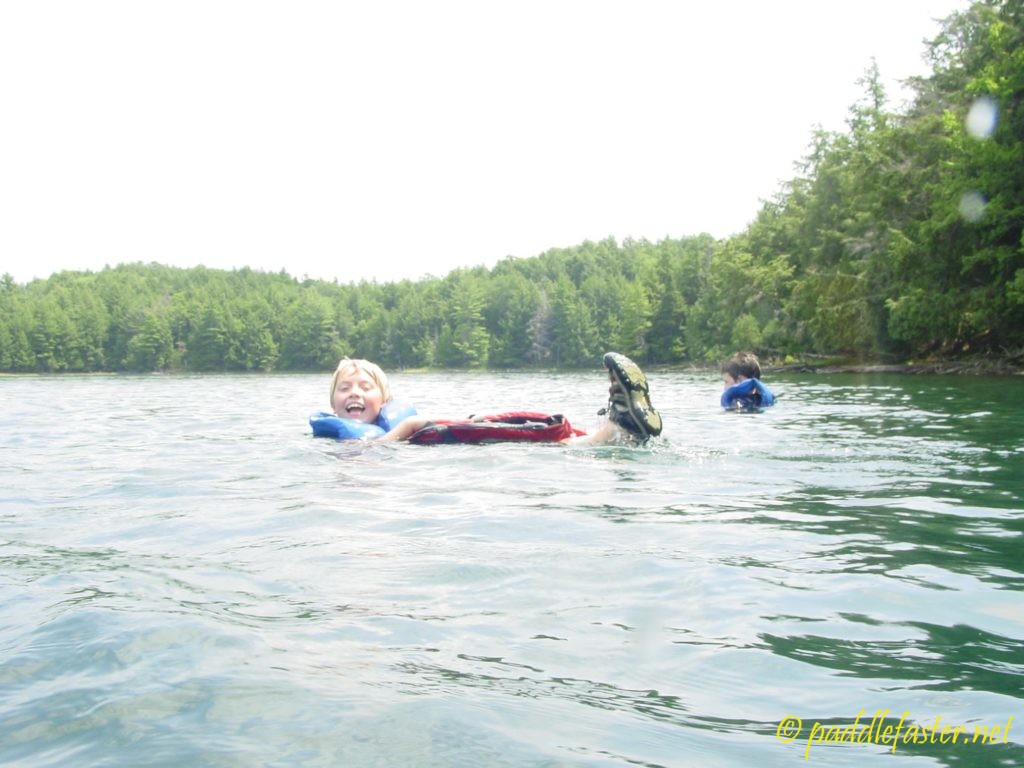 I had listened to the forecast again and heard an increased risk of showers for the day so I came in a little early & got to work stringing up a tarp while everybody finished up in the water.

Before long its time to get lunch going… We’re having mac & cheese w/ground beef. I borrowed a dehydrator a couple months prior and made up a bunch of dried fruit, strawberry leather, jerky, and ground beef. We get out some of the snacks while lunch is getting made.

Lunch is quickly eaten, but as we get to the bottom of the pot we discover a couple things – I need a long handled spoon to get all the way down there, some of the noodles have fused to the bottom of the pot, and the pots I got as wedding presents aren’t all that great for cooking as they tend to scorch…. a lot. As it was, dishes got done pretty quickly and the boys were back to exploring around.

The boys do a lot of exploring around then take refuge in my & Gavin’s tent around midafternoon to play chess and then cards. We hear giggles and other fun sounds, along with the occasional admonishment from Gavin about roughhousing in the tent. Wonder where he got that from? =)

Dan did a great job finding some nice logs to produce embers we hope will last for making pizzas. We get things going around 7, right after the first package of cheese and the pepperoni are opened we notice the smoke from the fire which had been drifting towards the lake has decidedly changed directions and is now blowing into camp. Dan suggests holding off on saucing up the first pizza crusts and I quickly agree. Soon the rain starts, and quickly its pouring down. The boys are happy and dry in our tent, and the 3 dads stand around looking at the rain and wondering what to do next. After a half hour of rain the fire’s just about extinguished, the great coals that Dan had built up waterlogged and cold. As we’re standing under the tarp, mulling what to do, I hear a crack not too far away. A minute later I see the top of a tree topple over up the hill from our campsite, maybe a few hundred yards away.
We make an executive decision, and get out the trail mix, granola bars, string cheese, dehydrated fruit, jerky, and strawberry leather for dinner. Once we’re ready and there’s a lull in the rain we tell the boys about our changed dinner plans and instead what’s to eat. Everybody piles out of the tent and we stand around under the tarp quietly munching and watching the rain come back for another round. Its now dark & still raining, we decide to call it an early night. The boys head off for their respective family tents and the dads prep the campsite for bed. We pass around the scotch a couple times as a nightcap, then satisfied that everything is put away we also head in.

Gavin’s still up, playing a game of chess against the computer of his electronic chess set, but perfectly happy and comfortable in the tent. We talk a little as I’m getting changed, then he finishes his game and goes to sleep. I stay up a little while longer and write in my journal.