Evie wakes me up in the middle of the night, wanting an escort on the latrine trail. Canoe country can be spooky at night, especially when the moon’s but a sliver that sets shortly after the sun does. We make the short hike and right away I’m super cold, like teeth chattering shivering cold. Evie’s just fine, coupled with how sweaty I felt when I got woke up I wonder if I’ve had a fever break while I was asleep. Despite my feeling cold, we sit on the angular rocks between shore and the tent, watching the stars and talking a little. We head back into the tent to the warmth and comfort of our sleeping bags.

My silent wrist alarm goes off at 6:30, like it has been all week. I linger in the tent for a while, just kind of feeling weird. Eventually I come out and sit by the firepit and still, I feel strange. I even go and half nap for 45 minutes in the damp-from-dew hammock. Nothing is really helping so I do what I should have done earlier and just go back to bed. 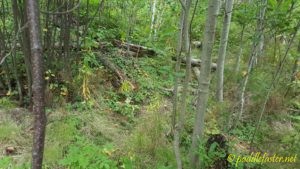 It’s after noon before anyone leaves the tent again. Today is overcast, but warm. The weather radio didn’t talk anything about cloudy skies today and it seems way too thick to be just smoke. A quick check of the radio confirms that indeed, today is supposed to be partly cloudy turning clear. Devin and I go down the latrine trail to collect firewood for making breakfast and end up flushing out half a dozen spruce grouse. There’s one in the photo, they blend in very well.

We’ve got kinda bad by this point about taking pictures of things, but “breakfast” today was pancakes augmented with the rest of the blueberries we picked on Alpine along with the usual bacon & hash browns. It was probably 2PM by the time we were done and cleaning up.

We don’t do much else today. I go get more firewood a couple times but for the most part we just hung around camp and were lazy. Devin fished a bunch, Evie fished a little but spent more time in the hammock. At one point I go and jump in the lake with Devin…. Partly to rinse off my clothes and my body, but also in the hope it helps to clear my head a little. Indeed it does, and the rest of our last afternoon finishes in better spirits than the first part. 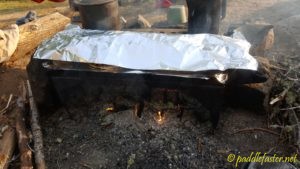 Dinner tonight is another camping favorite of mine to make, ever since my 2nd trip to the area with Joe – Backwoods Pizzas! So much of a favorite that it’s almost assumed the same position of importance in the menu as 1st night steaks. The best part is it’s really simple to make – the most important thing to remember is maintain a nice, even fire with little flames. We went through a bunch of little sticks while it was cooking to maintain a nice working temperature. In the end, though, we were rewarded for these efforts. 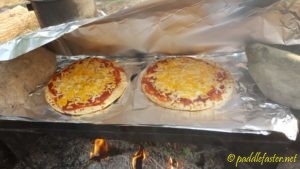 Just like our other meals, we had too much and decided against making 4 pizzas in lieu of just two and left the pepperoni off of both. E tells me afterward that she’d have helped eat the leftover pepperoni.

Dinner is cleaned up quickly and as the sun sets we start to see clearing skies off to the west. 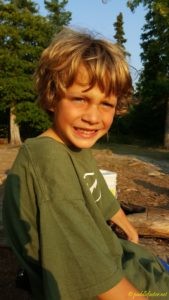 We all head for the rocks to bask in the sun for a few glorious minutes before it disappears below the trees across from us.

The weather radio has dropped any mention of precipitation chances for tonight again, and so we are going to sleep another night with the fly off. There’s a little breeze this evening, which should help with minimizing condensation buildup in the tent.

The sunset is plain, almost muted. I contemplate our travels of this past week and the various challenges we’ve overcome and the successes that have come with it. 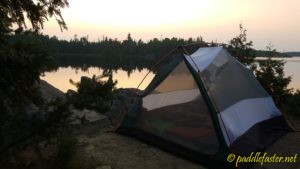 I’ve yet to see so much of this beautiful country and still, the Boundary Waters continues to be my “happy place” that I will continue to try to introduce new people to & share with friends and loved ones for as long as I can. 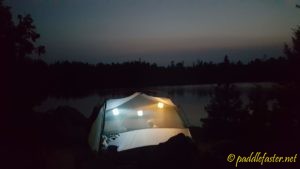 I poke and prod the fire, trying to keep the flame alive for as long as I can. Devin & Evie have retreated to the tent, no doubt playing slapjack, go fish, Uno, or another fun game Evie has learned at camp this past summer. I slap mosquitoes for a while but before long the fire becomes hopeless to keep alive and I join in the card game fun inside the tent.

Tomorrow we pack up and leave the Boundary Waters, but we still have one night after that up in canoe country.