Our final layover day of the trip and our final full day in the wilderness. Same routine as other mornings, essentially the same breakfast too. The sound of me breaking down firewood for breakfast gets the girls up and moving, and by 10:30 we’ve got breakfast going in full swing. The food is mostly prepared in shifts, however Evie and Grace are working together well making the pancakes with Evie handling the pouring and cooking and Grace loading them up with berries. 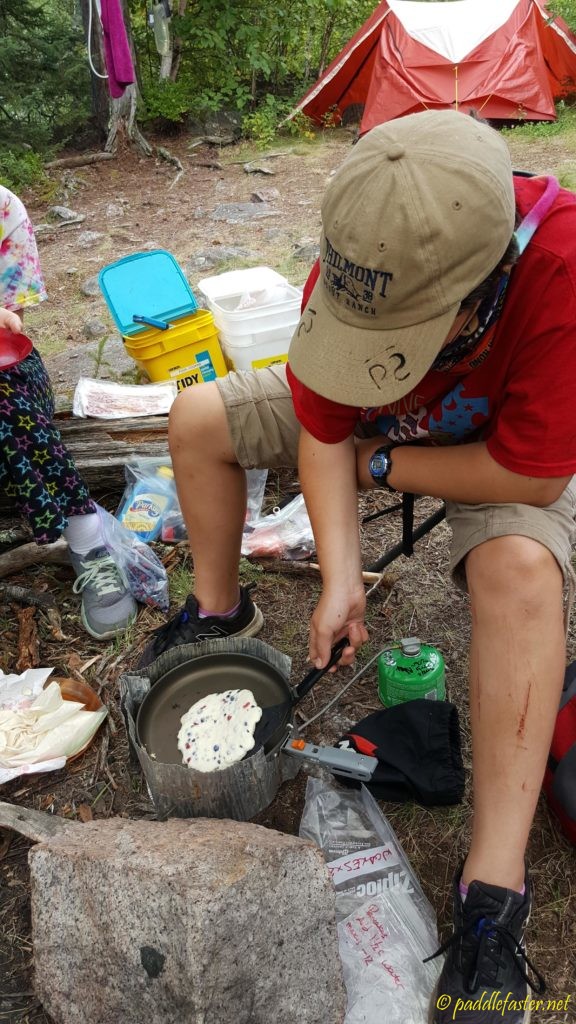 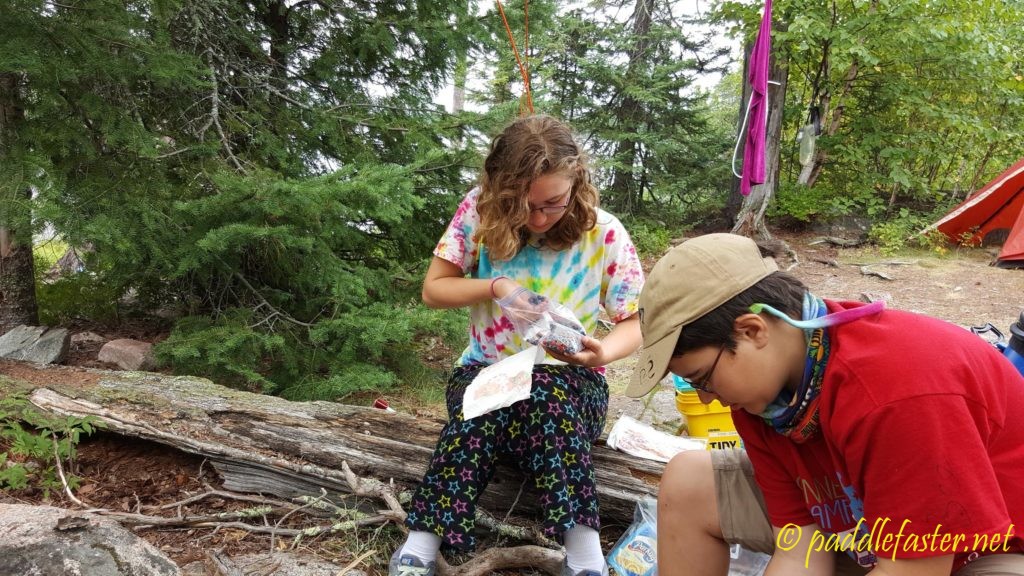 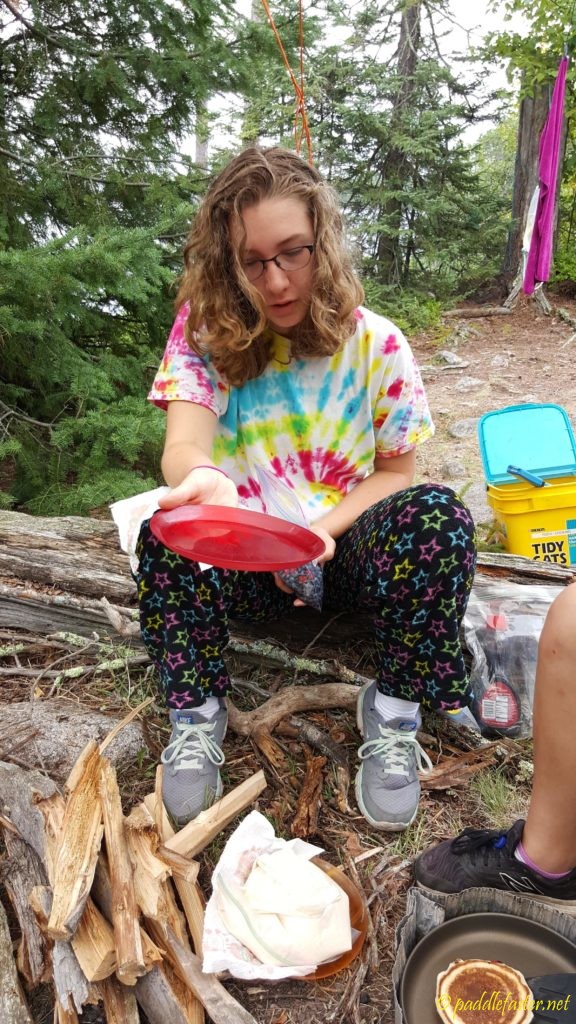 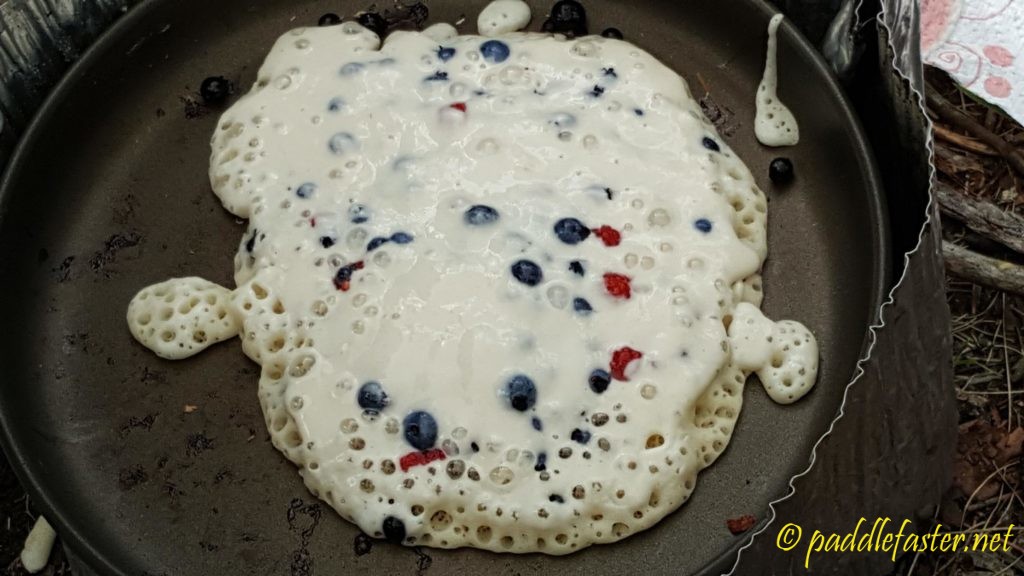 I get to sample one of the pancakes while I’m involved with cooking the hash browns and bacon. 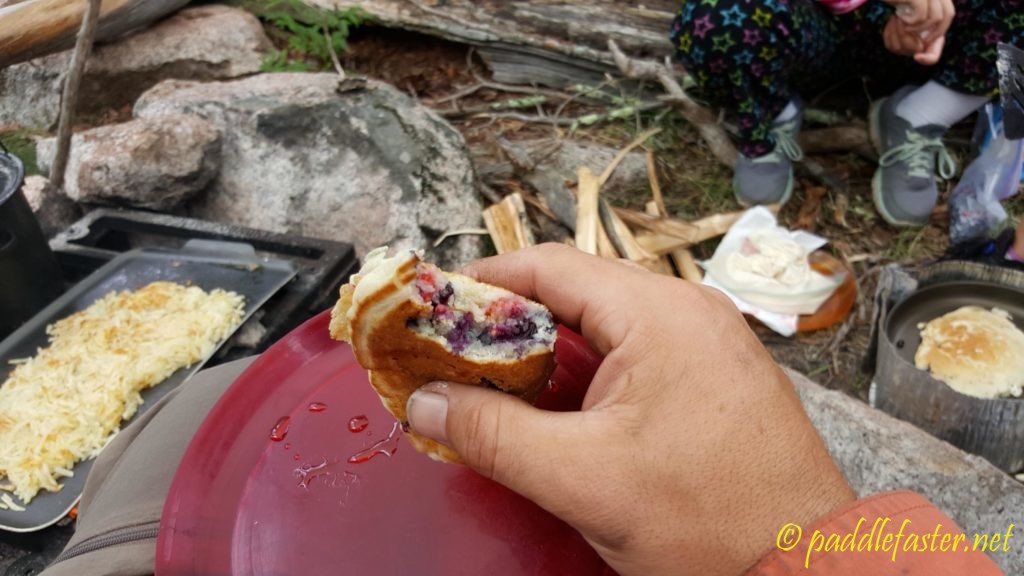 Unlike the rest of us weirdos that devour the pieces of breakfast as they become ready, Grace decides she would be more civilized and wait for her entire portion to be plated. I think she was pleased with the outcome. 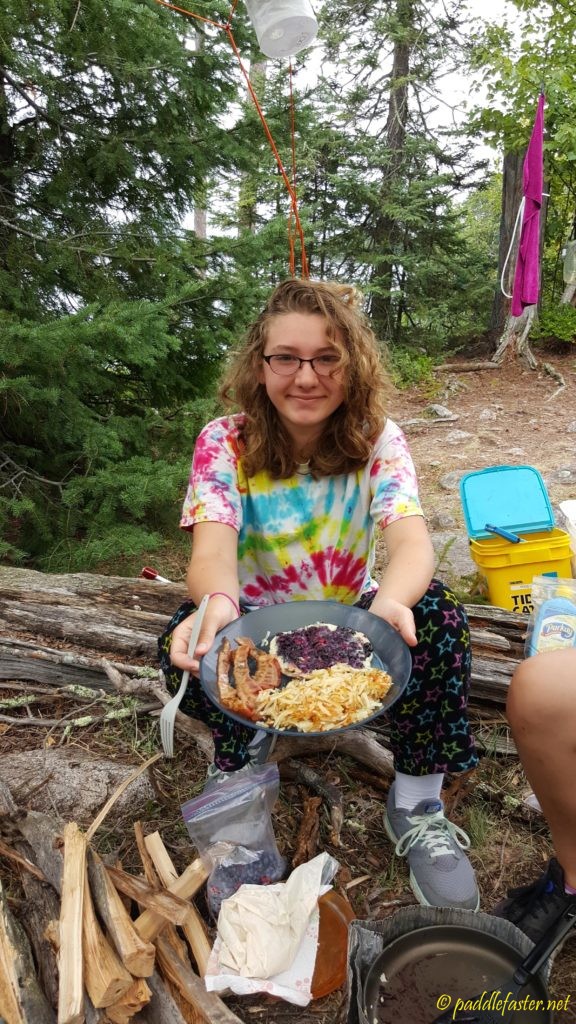 After breakfast Matt & Grace enjoy a little time together while looking out over the lake. Matt will come to believe our campsite is possibly the past site of maybe a cabin based on the terracing he sees in the rocks leading up to the firegrate area. I’m unsure about this since there’s no other evidence of a structure here in the past, but who knows? 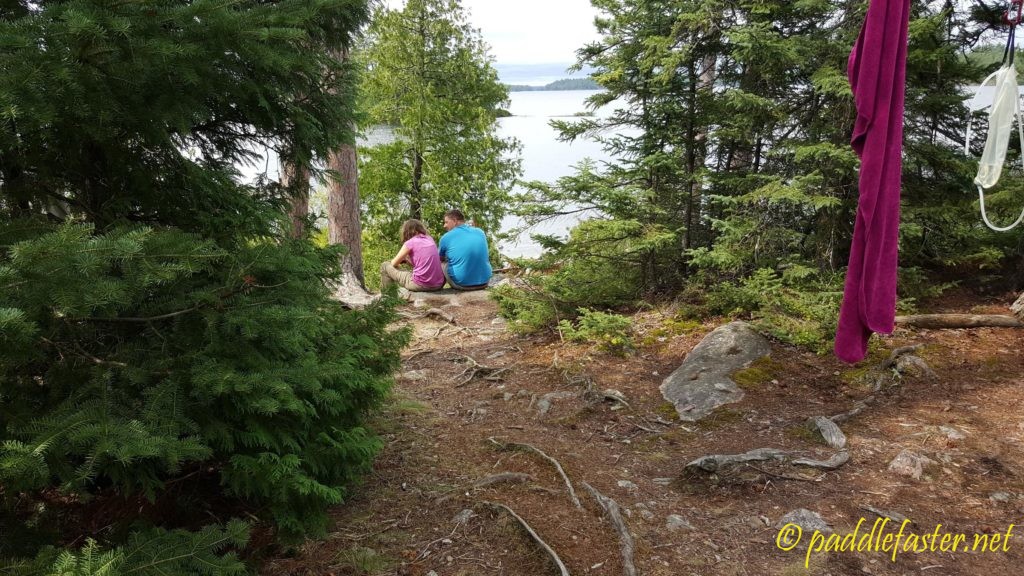 A little while later the dishes are done and we’re starting to switch into fishing mode. We’d like to find at least another bass to augment the one still on the stringer, so we start getting the boats prepped to launch. 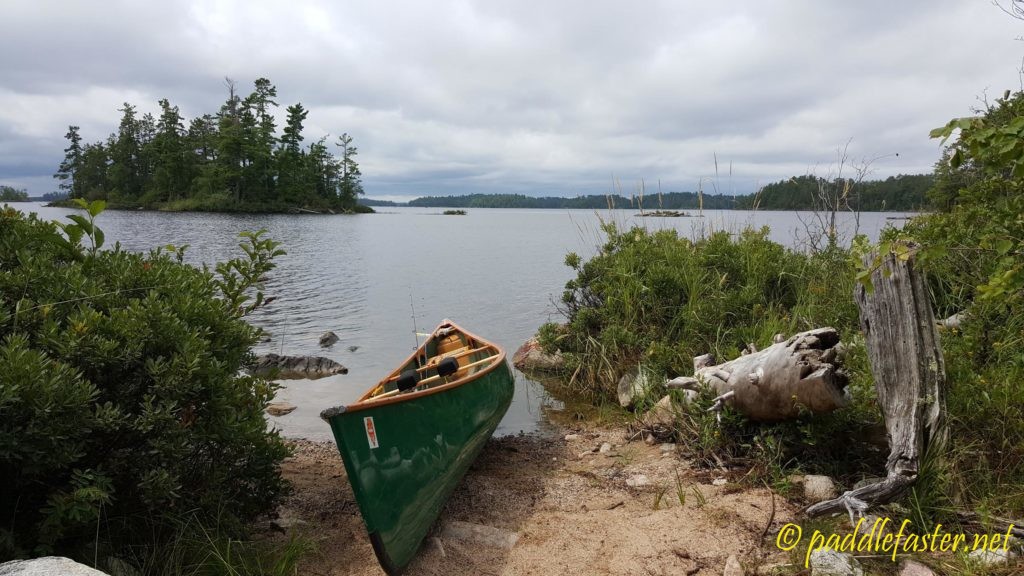 The general plan is to fish around the island we’re camped on. There’s a couple mounds poking up from the water across from our site and it looks like it could be interesting structure for fish. We spend the next couple hours going in a slow circle around our island. Evie and I both get fish on the line which subsequently are able to get off the hook. 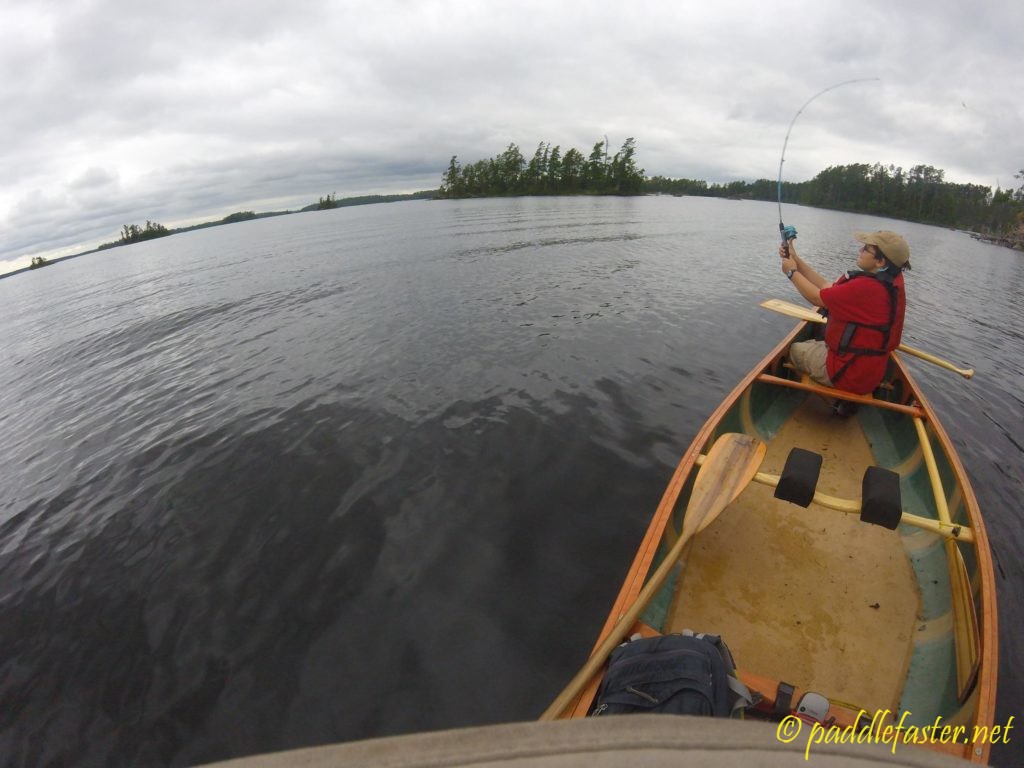 When we’re across from our site Evie decides to try a different kind of bait so I set her up with a white jighead tipped with a black twisty tail. I drop it in to the water to demonstrate to her how to jig and immediately get a fish on. Poor thing, I really wanted her to catch the fish today and I caught it using her gear! My stringer is back at camp, though. Luckily Matt isn’t too far away and lends me his. Later he’d regret loaning me his stringer as in a little bit he’ll have a 20″ pike flopping around inside his boat…. 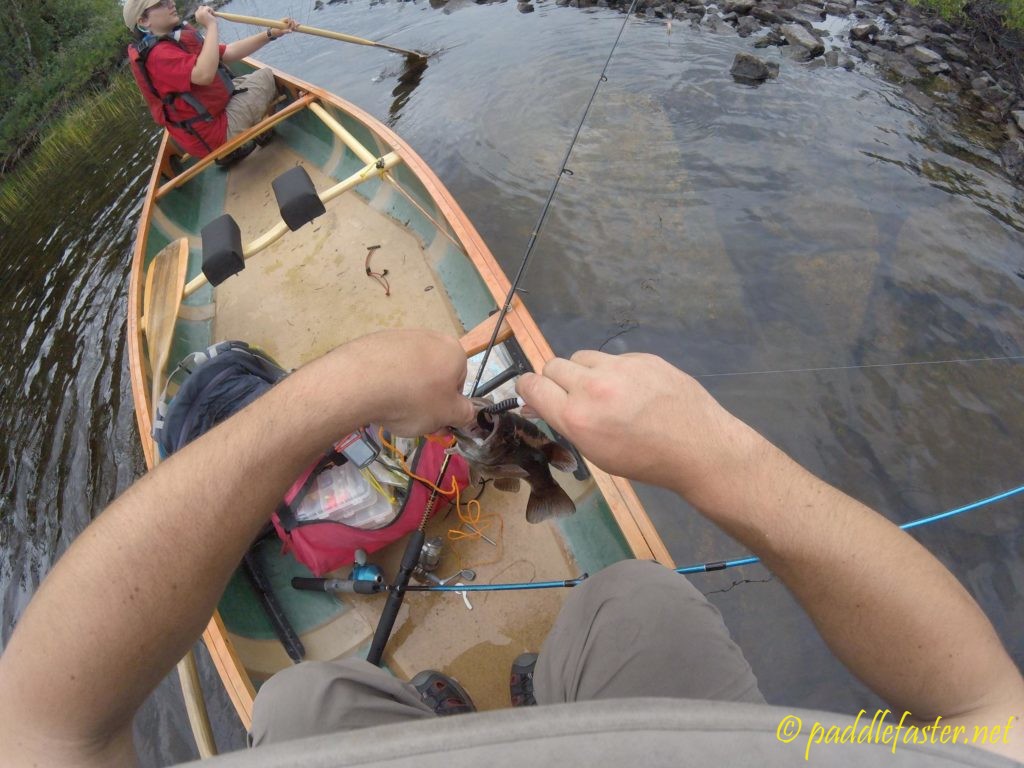 A while later Evie gets bored with fishing and wants to head back to camp to continue picking berries. I’m OK with that too, especially since Matt & Grace have already headed in. Back ashore there’s now 3 fish to be filleted & Matt goes first breaking down his pike then me with my two bass. 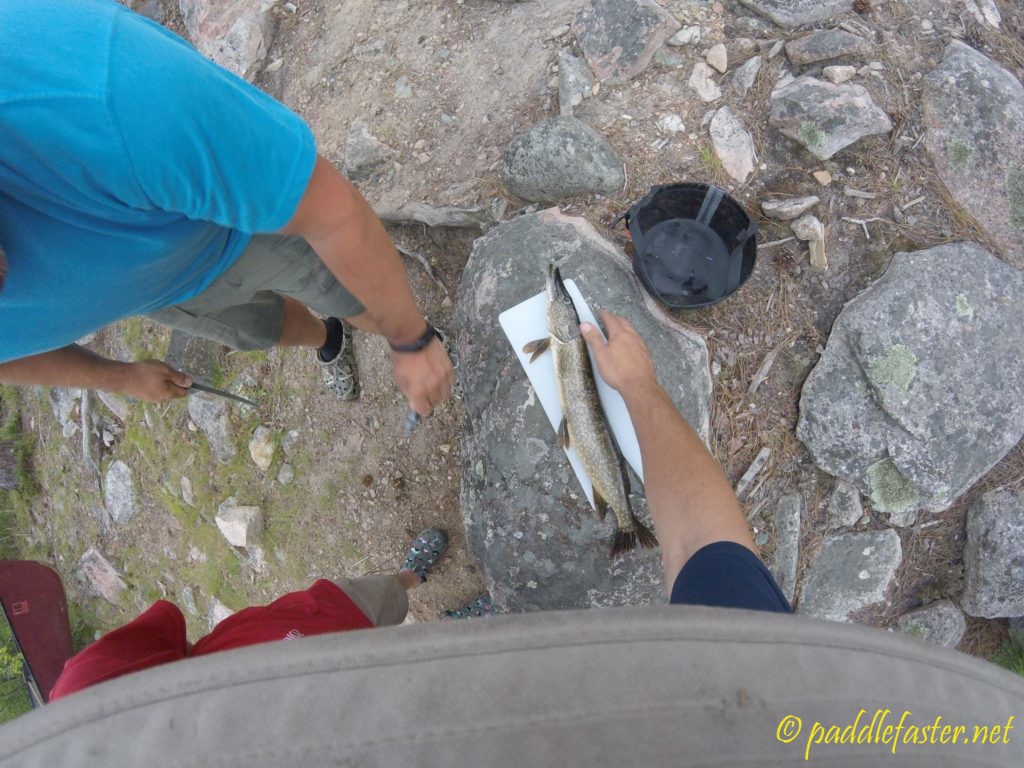 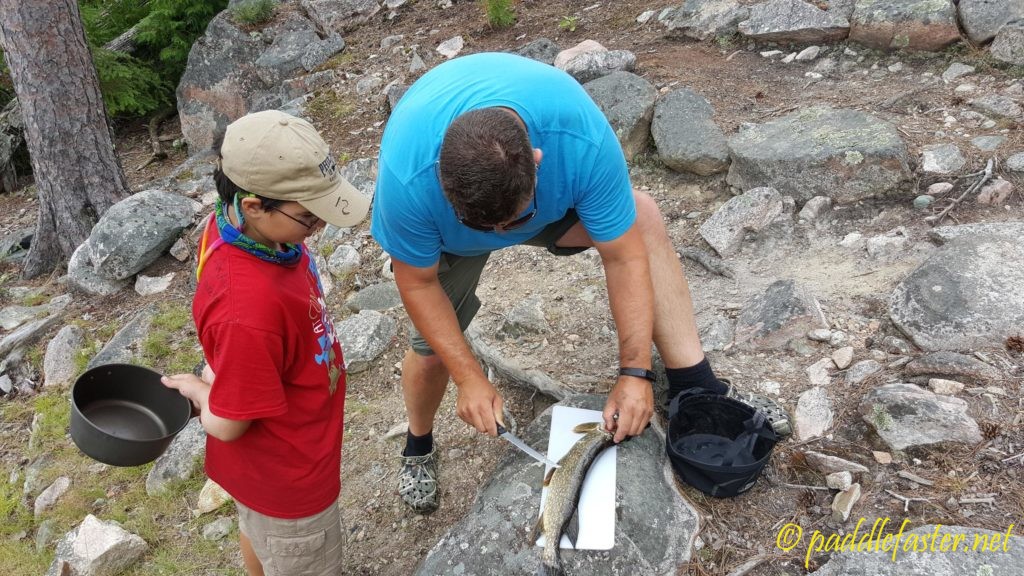 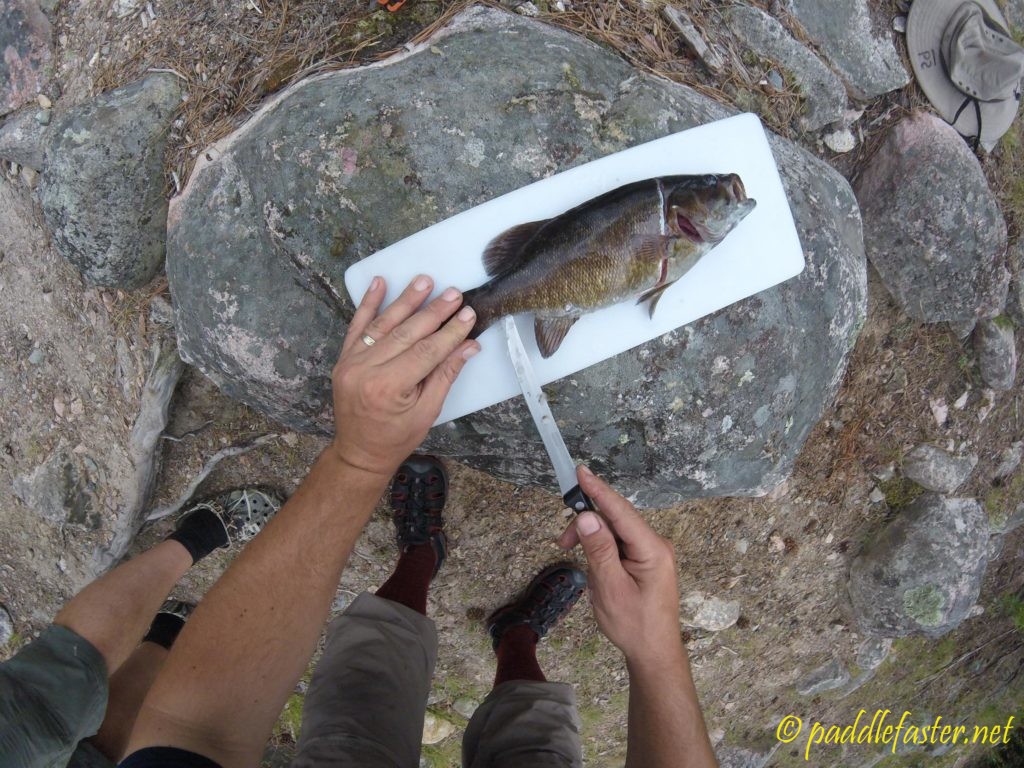 Before long we have a very nice sized fry going on. Happy to say that we had so much fish that it replaced the dinner that was planned for that evening. Well, except for the Cheddar Bay biscuits. I didn’t carry the remainder of the shredded cheddar for the whole trip to not make them, dammit! 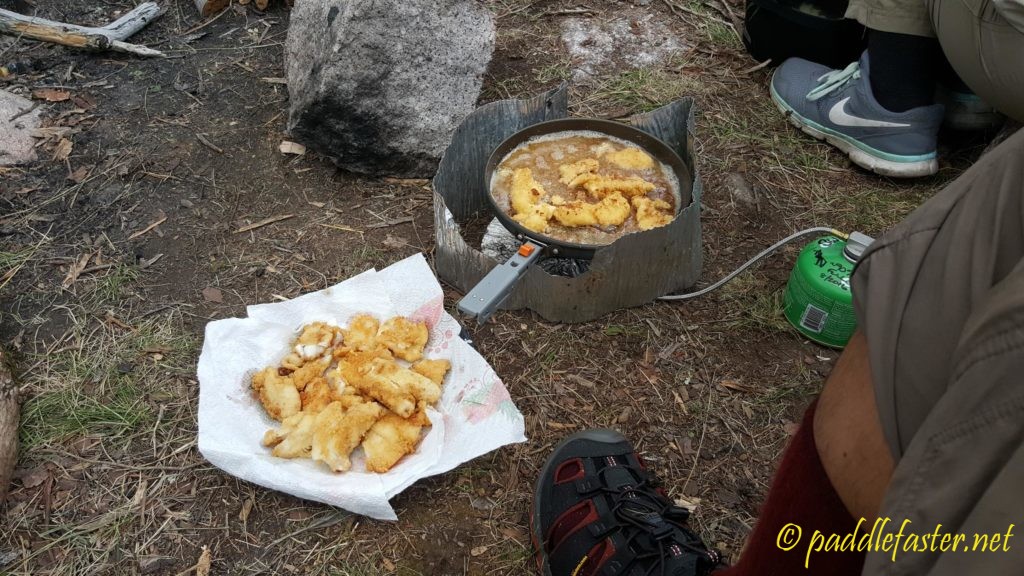 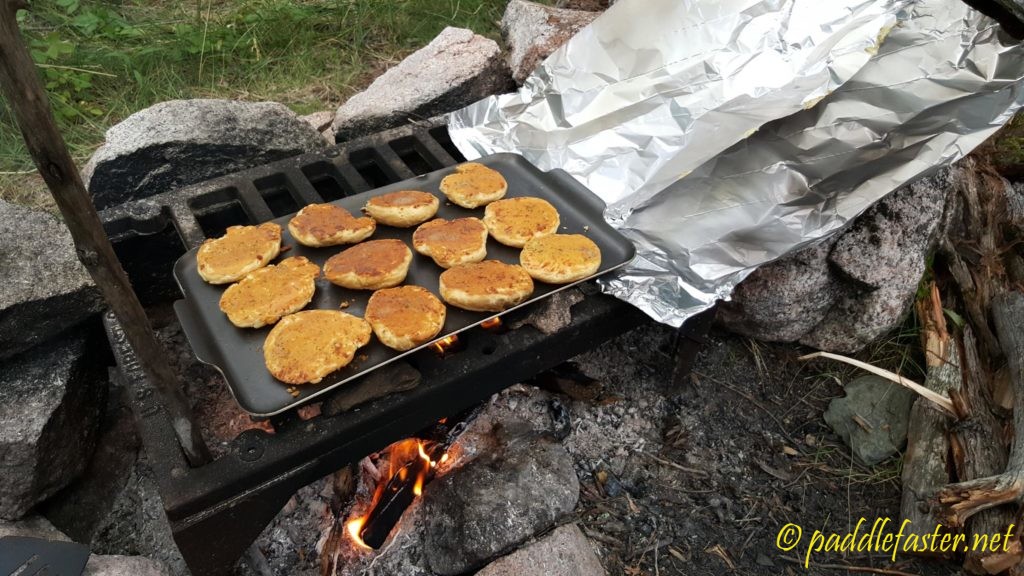 With dinner done and no future needs for the large pot, Evie goes off to pick more blueberries. Her exploring of the patch yesterday and earlier today revealed it to be never ending as it curled clockwise towards the North around the island. These berries were different than other ones we encountered on the trip. Other blues were small and the plants lowish to the ground. These berries were occasionally twice the size, nearly grocery store sized, and some of the plants were knee height. Also other plants earlier in the week would have a berry here and there, maybe two or three to a cluster. These plants were heavy with fruit and many were found in bunches of a half dozen or more per cluster. Every time I would turn and look a different direction I’d see a plant covered with fruit. Evie picked until nearly dark, occasionally with help from me or Matt or Grace. Ev decides that we’re going to bring her bounty home, so we seal up the pot with its lid & use the bucket that serves as the outer shell for the cook kit to keep the lid secure. 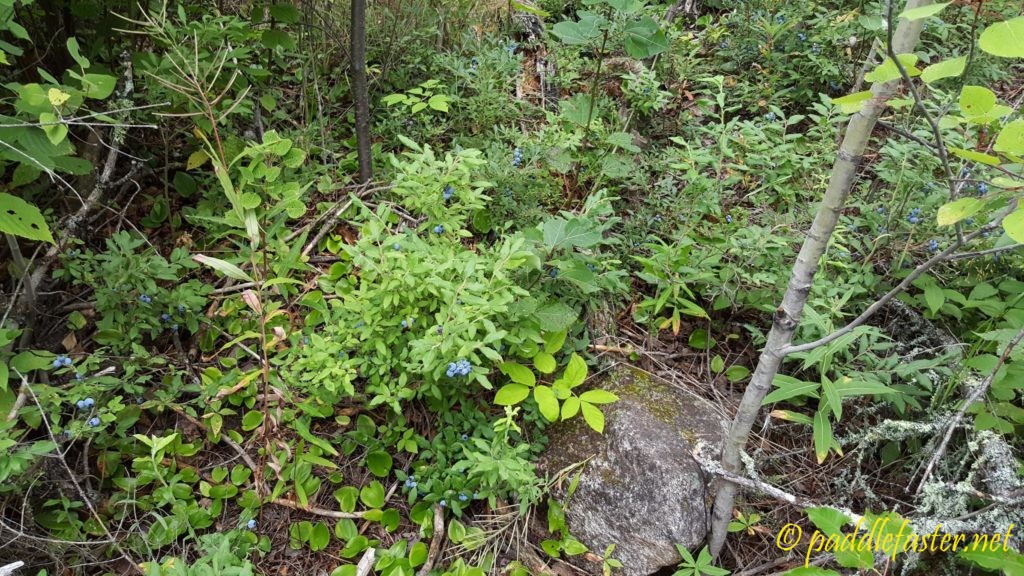 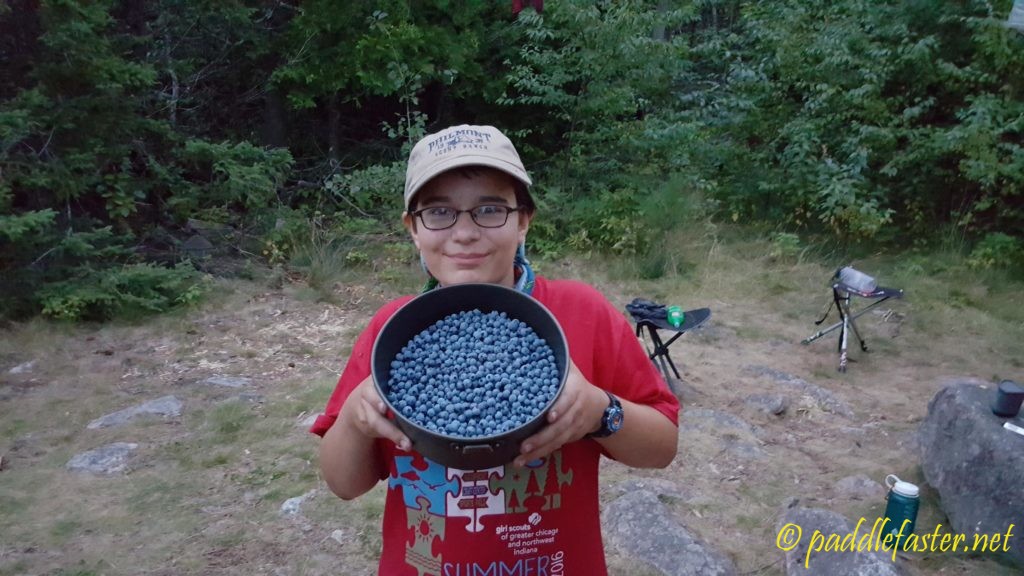 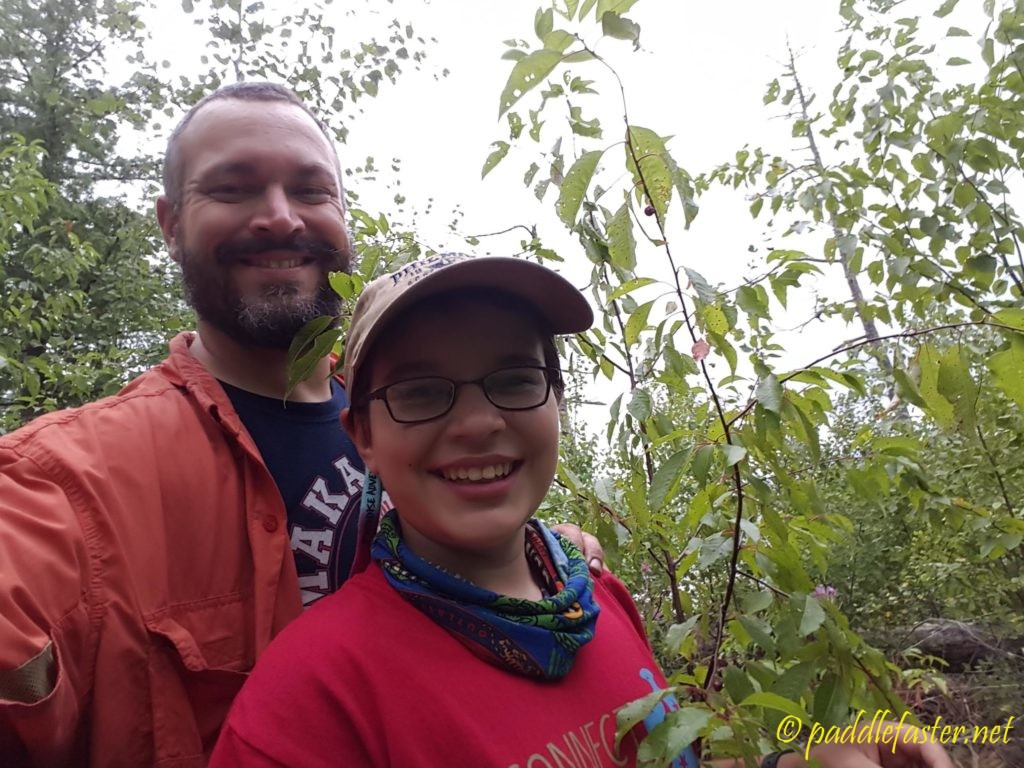 Everyone lingers around the campfire tonight as we pack up as best as we can for the night. There’s rain again in the forecast for overnight and it sounds like it might be a wet paddle out tomorrow. We’re maybe 4 miles from the landing and it’s a straight shot down the corridor. As long as there isn’t a terrible wind from the South or West we should be just fine.

One by one people head off to tents. First Evie then Grace, leaving me & Matt to sip our waning bourbon supply and watch the fire burn down. Then, Matt turns in and it’s only me & the fire left to contemplate the experience of the last week and the memories which I hope will remain long after I’ve left. This is a special place for me, the area we’ve come to refer to as Canoe Country or the Boundary Waters. For me, the closest thing to a holy shrine or site to which pilgrims travel from far lengths to pay their respects. I am one of those pilgrims – the wilderness is my church. 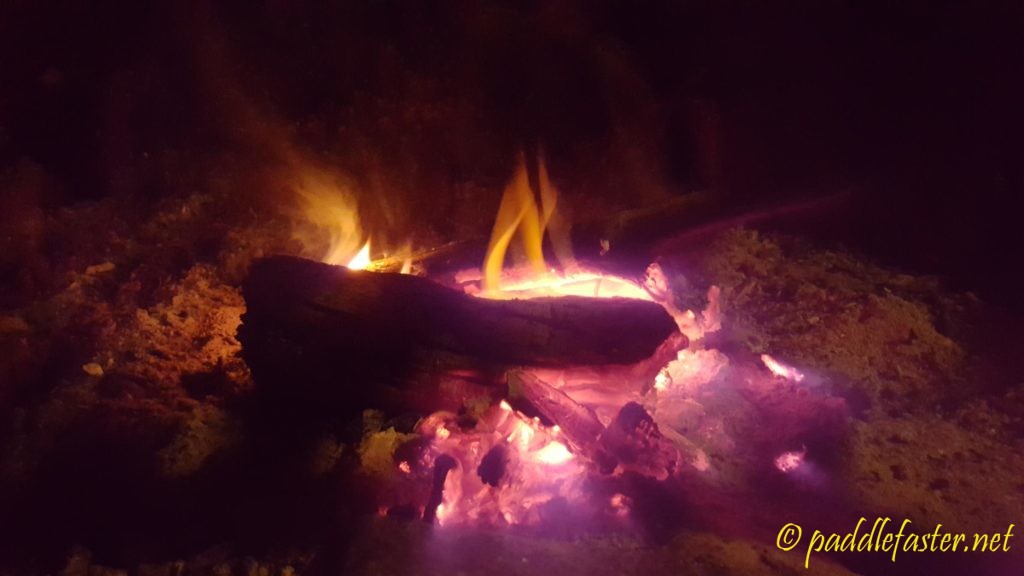 My heart and soul replenished, I douse the remains of the fire and hit the sack.