My alarm goes off at 6:30 or so, and I snooze for a couple cycles because of how late it was when I got to sleep. Finally, I roll out of bed before 7 and start to get things laid out for the kids. Start to wake them up around 7:15 and by 7:30 they’re begrudgingly up and moving. Breakfast is muffins, fruit, and juice we brought from home and it’s eaten fairly quickly. We’re down at Seagull’s office after packing up our bunk and the kids take in the view from the end of the pier while I get the permit issued.  It’s forecast to be breezy, with 10-15mph with gusts over 20 coming from the SW, perfect conditions if you like paddling into headwinds and occasional rollers.

We’re making decent time, and after taking shelter in the lee side of some islands on Sea Gull we’re approaching the BWCA boundary sign.

We weave in and out of channels between islands trying to stay out of the wind as much as possible, since I’m doing most of the paddling and more of my paddle strokes count towards forward progress and not fighting the wind. I will say that our ride for the week, a green gelcoat We-no-nah Spirit II in Tuf-Weave layup, does very well with how we’re loaded and in the wind & waves.

At one point, when trying to go through a narrow & shallow channel between a couple islands we get hung up on some rocks. In the end Evie and I get out so the canoe floats enough that we can pull it past the just-underwater rocks and get back in.

Had we gone a different route we would have passed pretty close to the Palisades of Sea Gull Lake, however to get that close now would essentially be backtracking, so we see them from a little bit of a distance. The Palisades rise about 100′ from the surface of Sea Gull, and a decade ago when I was last here with Ken & Joe we paddled right in front of them as well.

As it would happen, before we got to the bottom of Sea Gull both kids started asking if there was a campsite nearby as they wanted to visit the wilderness latrine,  and thankfully the last campsite on Sea Gull obliged us by being unoccupied. A few minutes later we’re at the portage, which you can just see in the photo as a bare patch on the shoreline right of the middle of the photo. 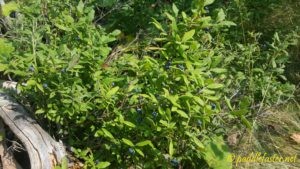 This particular portage has been referred to as a superhighway by some, as Sea Gull has a large number of daily entry permits and while some never leave the entry lake others use Sea Gull as a gateway towards some of the lakes further to the West. As a result of its use the path is wide and well worn by others who came before us. There’s wild raspberries and blueberries in patches along the trail, and as this area was involved in forest fires back in 2006 and 2007 it’s prime blueberry habitat.

Portage completed and the canoe loaded, we’re now on our destination lake for the next couple nights, Alpine Lake. In 2008, last time I dipped a paddle into this body of water, I was just passing through. This time, however, I’m looking forward to a couple nights here. I’ve done some online reconnaissance in the months before our trip and the GPS is loaded with the coordinates of all the campsites plus special markers for the sites which got good reviews. We scope out a couple sites, find one occupied, and ultimately decide upon site #346 which is on the southernmost tip of a peninsula with a very nice rock feature. We have a quick snack/lunch of fruit leather, granola bars, and cheese sticks before proceeding to fully unpack and settle in.

The campsite seems to have just about everything we’d want in a site – big, open, shady area for the firepit, nice flat tent pads, loads of tree options for the hammock and tarp, and the rocks on the point are great for stargazing, fishing, plus there’s a good drop off so with the right aim one could jump in to water pretty deep. Dvin naturally only wants to swim, so I let him have at it and Evie decides to do a thorough test of my hammock hang.

The previous occupants left a fair supply of firewood for us (thank you!) and while Devin is swimming (PFD on, of course) I go about getting the fire ready to be lit so we can make dinner. Devin wants to help light the fire too, and I pass the time until he’s done swimming by sawing down & batoning the logs into usable sizes.

Once Devin is done in the water, dried off, and changed, we go about getting the fire lit – there’s dinner to be made and we’re all hungry! Naturally, the grate has to be heated up and scraped clean with some foil so the steaks and potatoes go on after there’s a good bed of coals. I picked up this skillet specifically for taking canoe camping. I have an 8″ that I use at home all the time for eggs, and this 10 1/2″ performs just as well. I look forward to adding to it’s seasoning in  future years. Dinner was great, except I overestimated how much food we’d consume. In hindsight we should have only had half as much potatoes and one less steak. Ah well….

We’re getting dinner cleaned up right as the mosquitoes are coming out. The kids dive for the tent while I finish getting our camp situated for the night. The bugs will prove to be too much to overcome tonight for stargazing, kids are tired from the early start and paddle, and before too long we settle in for the night.